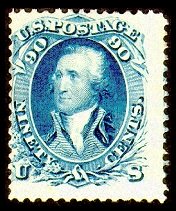 US Classic Stamps underwent a complete transformation in 1861.

With the outbreak of the American Civil War in April 1861, the United States Government demonetized all of the postage stamp issues from 1847 to 1860, in order to prevent their use by postmasters and postal patrons within the Confederate States of America.

In May 1861, the Postmaster General ordered all postmasters within the United States to return their inventories of old stamps to Washington, D.C. It was further ordered that any letters received from the secessionist states, utilizing the old stamps, were to be treated as unpaid and were to be held for payment of postage. Unpaid letters that were not called-for were to be sent to the Dead Letter Office in Washington, D.C. 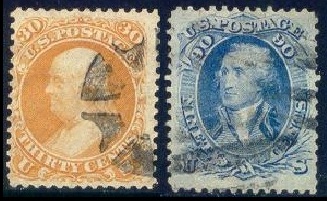 The new postage stamp designs have the same pictorial depictions, denominations, and basic colors as those of the 1857-1861 issues.


The 3 Cent stamp was first issued in pink shades. The pink (Sc. #64), and pigeon blood pink (Sc. #64a) shades are rare, but the rose pink (Sc. #64b) shade is relatively common. A few days after the first issue, the stamps were printed in rose (Sc. #65), with shades ranging from rose to rose red to dull red, and then to brownish red.

The perforated 3 Cent stamp, in the lake shade, formerly listed as Sc. #66, is now considered to be a Trial Color Proof. It can now be found in the Trial Color Proof section of the Scott US Specialized Catalog.

The first printing (Sc. #62B), which is rare, has no curved line below the stars and no outer line over the ornaments above the stars.

The second printing (Sc. #68) has a heavy, colored curved line drawn below the stars and an outer line drawn over the ornaments above the stars. For detailed drawings, refer to the Scott US Specialized Catalog.


The common shades on the 24 Cent denomination are red lilac (Sc. #70) and brown lilac (Sc. #70a). The one in the image above is the brown lilac shade. There are three VERY RARE shades of this stamp: The steel blue (Sc. #70b) shade, the violet (Sc. #70c) shade on thin paper, and the gray violet (Sc. #70d) shade on thin paper. As the ink used for these was unstable, and the colors can easily be altered, examples of these rare shades should only be purchased with certificates of authenticity.

There are numerous shades, printing varieties, and cancellations on all the denominations of this issue. Combined with Civil War Era covers and postal history, this issue can be a wonderful specialization opportunity for any philatelist.

Due to the widespread use of these US classic stamps during the American Civil War, used examples of all of them, including the high denominations, are abundant, and they are relatively affordable. 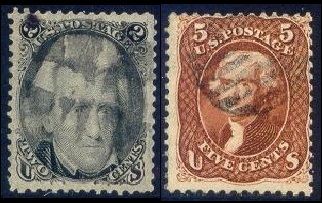 The five US classic stamps shown above were issued between 1862 and 1866.

The new 2 Cent denomination stamp (Sc. #73), featuring a portrait of President Andrew Jackson, was issued in July 1863 to pay the new drop rate for local letters.


The perforated 3 Cent denomination in the scarlet shade, formerly listed as Sc. #74, is now considered to be a Trial Color Proof. It can now be found in the Trial Color Proof section of the Scott US Specialized Catalog.

The 15 Cent denomination stamp (Sc. #77), featuring a portrait of President Abraham Lincoln, was issued in April 1866. It is considered a memorial issue, having appeared at the time of the first anniversary of the assassination of President Lincoln.

The 24 Cent denomination was replaced in 1862 by new stamps with a range of brighter, more attractive shades. The most common shades of the new stamps are gray (Sc. #78b), grayish lilac (Sc. #78a), and lilac (Sc. #78). There is also a VERY RARE shade of this issue, and that is the blackish violet (Sc. #78c). These should be purchased only with certificates of authenticity.

In August 1867, the US government began embossing sheets of US classic stamps with grills. The object was to break the fiber of the paper, so that the ink of the canceling device would soak into the paper and make washing of the cancel for reuse impossible. This practice was abandoned in 1870.

The image above shows all the major type US classic stamps of the 1861-1866 Issue, with the exception of the 90 C. denomination, which had grill embossing applied to them (Sc. #79 // #100). In many instances, the grill impression can be seen through the front of the stamps.

There are two main categories of the grills:

Grills with Points Up

Grills with Points Down

The A - Z Grills are all scarce to exceedingly rare (Sc. #79 // #85F). Collecting all of these grilled issues would cost several million dollars, based on the current catalog values. The 1 Cent denomination with the Z Grill is unique, and it has a Scott Catalog value of $3,000,000.00. It is considered the rarest of all US classic stamps.


The E - F Grills are readily attainable, and they can all be acquired for a moderate expense. The image above is comprised of a mixture of E Grills and F Grills (Sc. #86 // #100). There is also a 90 Cent denomination with the F Grill, which is not shown above.


Many of the grills come in numerous varieties, as well, including double grills, triple grills, quadruple grills, and split grills.


In 1875, to supply the needs of collectors, the US Post Office contracted with the National Banknote Co. to make reprints of the Issues of 1861 to 1866 (Sc. #102-11). These reprinted US Classic stamps were printed on hard white paper, with white crackly gum, and they were all perforated 12. These reprints have brighter colors, sharper, proof-like impressions, and the paper is very white, instead of yellowish, like on the original issues.  These stamps WERE VALID for postage. With the exception of the 1 Cent denomination, all of these reprints are rare and are seldom offered for sale.