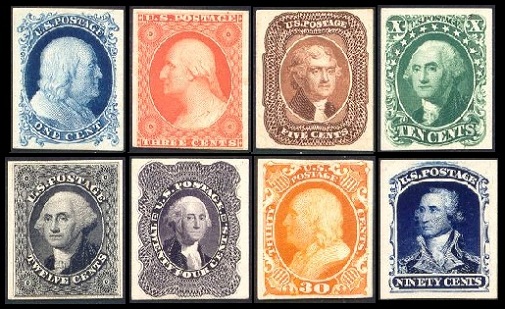 US classic stamps were transformed, in the middle of 1857, by a brand new innovation ... perforations! All the stamps of this series are perforated approximately 15 1/2. 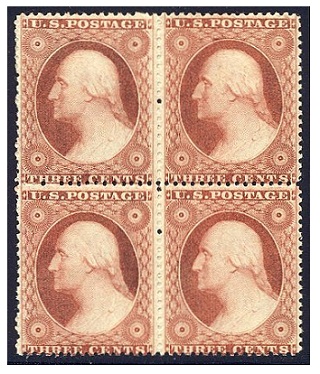 Initially, remaining stocks of the 1851-1856 general issues were used for the new perforated sheets. However, those stamp designs were mostly too large to fit in between the perforations, and the results were unsatisfactory. During the course of the US classic stamps issue of 1857-1861, new, modified plates were created, which looked better, when the sheets were perforated. This resulted in new types of the stamps of the former 1851-1856 issue.

And, for the postal clerks and patrons of the late 1850's, there was the question of what to do with the perforations around the stamps. Change can sometimes be confusing, rather than straightforward. The fact that the perforations had been produced in order to facilitate the easy separation of the sheets of stamps hadn't really sunk-in yet. For some time after the issue of perforated stamps, postal clerks and patrons continued to cut the sheets apart with scissors! Of course, in many cases, this caused the destruction of the perforations and the mutilation of the postage stamps themselves!

For drawings and descriptions of all the individual types of the 1 Cent issues of 1851 and 1857, please refer to the Scott US Specialized Catalog or to the Scott Standard Postage Stamp Catalog Volume I.

The perforated US classic stamps of the 1 Cent denomination were printed from 11 plates, three of the 1851-1856 imperforate 1 Cent plates, and eight new plates, specially designed for the perforated 1 Cent stamps. They are as follows:

Types I (#18), II (#20), and V (#26) are shown in the image above. As you can see in the image above, the size of the middle stamp, which is a Type II from one of the 1851 plates, exceeds the perforated area. The stamp on the left and the one on the right are from the new plates, designed for the perforated stamps, and they fit into the perforated area much better. With only a couple exceptions, the 1 Cent types are relatively affordable, based on what a typical US classic stamps budget would allow for.

The Type I stamps were all printed from the 1851-1856 imperforate plates, and they have frame lines on all four sides. The 3 Cent stamps from the imperforate plates were much too big for the perforated issues. The example shown above at the left is actually extremely well centered! All four frame lines are evident at the edges of the perforations!

The Type II stamps were printed from new plates, re-designed for the perforated sheets. They have had the frame lines at the top and bottom removed, to allow more space for the stamps to fit vertically in the perforated area. The stamp was still a bit large to fit into the perforated area, but the results were a little better. Four margin copies are obtainable.

Used Type II stamps are still relatively inexpensive, and they can form a great US classic stamps philatelic study for a very small investment. 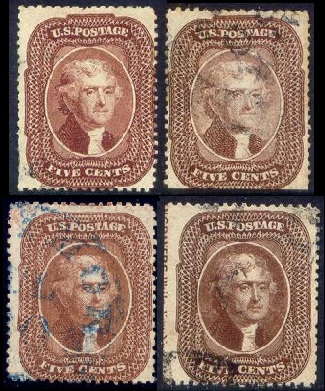 The perforated US classic stamps of the 5 Cent denomination exist in two major types. Scott also lists some of the varying shades as individual catalog numbers, as well. 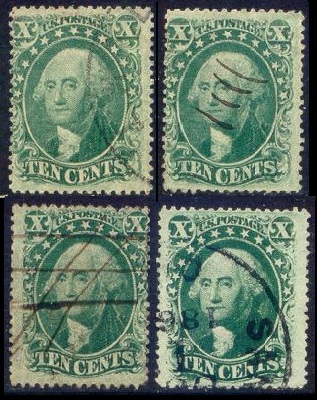 For drawings and descriptions of all the individual types of the 10 Cent issues of 1851 and 1857, please refer to the Scott US Specialized Catalog or to the Scott Standard Postage Stamp Catalog Volume I.

Types II, III, IV, and V are shown in the image above, from top left to bottom right. 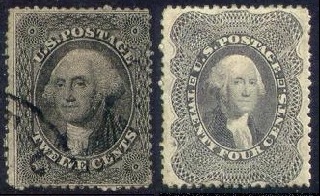 The perforated US classic stamps of the 12 Cent denomination exist in two types. They were printed from two plates, Plate 1, which was the original 1851 imperforate plate, and Plate 3, which was a new plate. The 12 Cent stamp is shown above left (Sc. #36, #36B).

In July of 1860, a new 24 Cent denomination was added to this perforated US classic stamps series. This new stamp, depicting George Washington, is shown at the upper right (Sc. #37). 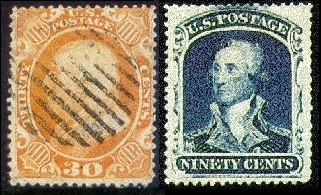 In around August of 1860, a new 30 Cent denomination was added to this perforated US classic stamps series. This new stamp, featuring an ornate design and depicting Benjamin Franklin, is shown at the upper left (Sc. #38). It comes in a number of attractive shades.

Near the end of 1860, a new 90 Cent denomination, featuring a portrait of General George Washington, was added (Sc. #39). Due to the outbreak of the American Civil War in April 1861, very few of these were ever used. Mint examples are scarce, and "authenticated" used examples are very rare.

With the outbreak of the American Civil War in 1861, the United States Government demonetized all of the 1857-1861 postage stamp issues, in order to prevent their being used by postmasters in the secessionist Confederate States.

After the American Civil War, there were huge stocks of some of these issues available in Southern post offices, and many of them were bought up by philatelists. Many of the mint sheets, multiples, and single examples of these stamps available in the philatelic marketplace today, exist due to their being saved by postmasters in the Confederate States, during the American Civil War.

In 1875, to supply the needs of collectors, the US Post Office contracted with the Continental Banknote Co. to print reproductions of the issues of 1857 to 1860 (Sc. #40-47). New 100 subject plates of the 1 Cent, 3 Cent, 10 Cent, and 12 Cent denominations were manufactured, and the stamps from these new plates are different from those of the original printings.

These reproduction US classic stamps were perforated 12 and printed on white paper without gum. They were NOT VALID for postage. With the exception of the 1 Cent denomination, all of these reproductions are rare and are seldom offered for sale.