The first adhesive US classic stamps, authorized by the Post Office Department for the prepayment of letter rates, went on sale at New York City post offices on July 1, 1847. They were sold the following day in Boston post offices, then they were distributed to all US post offices thereafter.

The two stamps were both engraved on light bluish gray paper. Their printing was contracted out to Rawdon, Wright, Hatch, and Edson, an engraving firm in New York City. 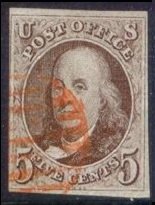 The 5 C. denomination stamp (Sc. #1) features a portrait of Benjamin Franklin, patriot, statesman, and the first Postmaster General of the United States. This stamp paid the rate on letters weighing less than 1 ounce and traveling less than 300 miles.

The 5 C. denomination can be collected in many shades, ranging from red orange to dark brown. The issued color, in most of the catalogs, is red brown, which is shown in the top image above. Three other examples of shades are shown in the bottom image above. 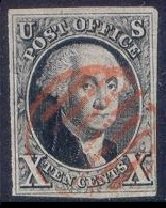 The 10 C. denomination stamp (Sc. #2) features a portrait of George Washington, hero of the American Revolution and the first President of the United States. This stamp paid the 1 ounce rate for letters traveling greater than 300 miles. 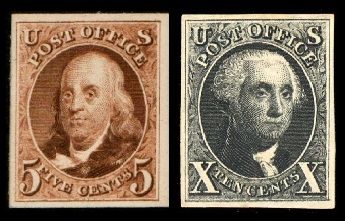 Reprints were made in 1875 by the Post Office Department (Sc. #3-4), so that collectors could buy examples of early US stamps that were no longer available.

As the original plates of the 1847 issue had been destroyed, new plates had to be made for the reprints. There are slight differences in the designs, between the original 1847 printings and the 1875 reprints (see the specialized catalogs for details).

The image above shows the plate proofs (on card) of the 1847 reprints (Sc. #3P4-4P4). The plate proofs, on card or on India paper, are much less expensive that the original reprints on stamp paper.  As with the original 1847 printings, the 1875 printings are imperforate.


Return to US Classic Stamps from
General Issues of 1847