US Classic stamps are generally considered by philatelists to be the adhesive postage stamps authorized by the US Post Office Department or local delivery services and issued between 1843 and 1901.

US Stamps have a Worldwide appeal, both to collectors and to seasoned philatelists. In 1847, the United States was barely 75 years old, but in that short time, this fledgling North American country had already developed a rich history and a thriving economy!  The leaders and other noteworthy personalities of this new republic would soon grace its extensive array of adhesive stamp issues for the remainder of the 19th Century.  The postal history of this era also provides a window into one of the most exciting periods in 19th Century North American history. 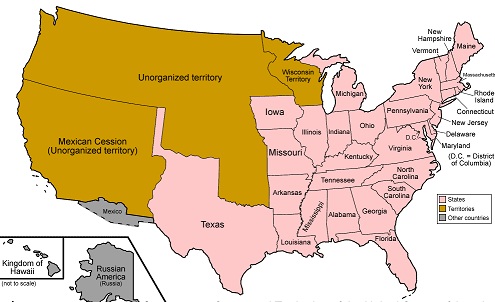 Map of the United States in 1848
Map from Wikimedia Commons, User = Golbez

The United States is a Federal Constitutional Republic. Originally a confederation of 13 former British colonies, it's constitution was drafted in 1787 and ratified in 1791. Though most of its present day territory was established by 1848, the major commercial centers were primarily along the Atlantic seaboard, with most of the territory far West of the Mississippi River still being "uncharted wilderness".

The United States was a small place, philatelically, in 1847. Railroads were still in their infancy, and letters to places like San Francisco had to travel by ship, to Nicaragua, then across Nicaragua, where they were again put on a ship traveling up the Western coast of North America to their destination.

US classic stamps "officially" begin with the first US government issue on July 1, 1847, but as early as 1843, there were privately made adhesive stamps in use in the United States.

Some companies that transported local mail had stamps printed to indicate the payment of their fees. These are referred to collectively as Carrier Stamps or Local Stamps. Many of these were used far after the first issue of official government postage stamps in 1847, for the collection of carrier fees in excess of the US postage.

During 1845 and 1846, some postmasters in large cities contracted out to private companies to print gummed stamps that they could use to indicate the prepayment of postage on letters. These are called Postmasters Provisionals, and today, most of them are prized rarities.  For most stamp collectors, the New York Postmaster Provisional stamps of 1846-1847 are about the only ones that are reasonably affordable.

With the beautifully engraved US classic stamps of the 19th Century, there are many opportunities for the collector and the philatelist. One can try and collect one example of each major issue, collect postmarks of a particular state or territory, collect the hundreds of fancy-cancel types, collect territorial postal history, etc. The options are endless.

For the novice, looking at the prices of early US stamps may seem frightening and prohibitive. But, one can collect this area without spending many thousands of dollars.

One can base their collection on a very low cost stamp, and when written-up and displayed with various types of postmarks and some covers or associated historical ephemera, they can create an outstanding looking exhibit-quality display with their lower-cost collection.

One can even collect US classics from a thematic approach, say ... Railroads, or the Civil War, or the Old West, and then make a collection of stamps, postmarks, and covers that would best illustrate your thematic write-up.


Return to Home Page from US Classic Stamps