US airmail stamps of 1930-1939 include the issues for the fabulous German airship Graf Zeppelin, as well as issues for the First Trans-Pacific flight of the China Clipper and a special issue for the inauguration of Trans-Atlantic airmail service.

This definitive airmail stamp was printed on the Flat Plate Press, and it is perforated 11.  The design measures 46-1/2 x 19 mm. 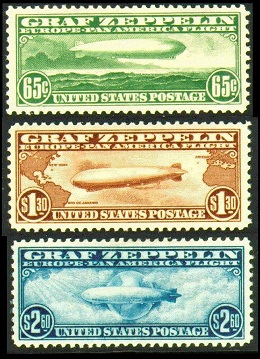 The three US airmail stamps shown above (Sc. #C13-15) were issued April 19, 1930 for the Europe-Pan America Flight of the German airship Graf Zeppelin.

The 65 Cent denomination depicts the airship Graf Zeppelin flying over the ocean.

The $1.30 denomination depicts the airship Graf Zeppelin in flight, between Europe and the Americas.

The $2.60 denomination depicts the airship Graf Zeppelin in flight, in front of a world globe, with clouds on either side.

For more information on the Europe-Pan American flight of the Graf Zeppelin, click on the following link:

Americans were enthusiastic about the flights of the airship Graf Zeppelin, but the rates for letters carried on board the airship were very expensive.  The $4.55 face value of a set of single stamps, in 1930, would be equivalent to about $48.00 today.  And, these stamps were issued right at the beginning of the worldwide Great Depression.

The Graf Zeppelin set was only on sale for about two months.  Collectors and dealers that could afford the stamps bought many of them for use on flown covers carried by the Graf Zeppelin.  Needless to say though, only about 8% of the total printing of a little over 1,000,000 of each denomination was sold  The unsold stamps were returned to the Post Office Department and incinerated.  Here are the figures:

With the exception of the Inverted Jenny, these are the collecting benchmark of the entire series of U.S. Airmail postage stamps.  The prices have actually decreased considerably, over the years, and a nice looking mint lightly hinged set of the 1930 Zeppelins can be purchased online today for under $1,000.00. 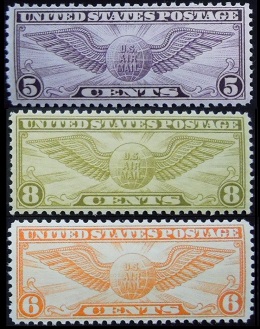 These new definitive airmail postage stamps were printed on the Rotary Press, and they are perforated 10-1/2 x 11.  The design of the 5 Cent denomination from the Rotary Press plate measures 47-1/2 x 19 mm.

The 50 C. denomination airmail stamp shown above (Sc. #C18), often called the "Baby Zepp", was issued on October 2, 1933 in connection with the flight of the Graf Zeppelin to the Chicago Century of Progress International Exposition in Chicago.

The design of this 50 Cent denomination stamp shows the Graf Zeppelin in Flight over the ocean, with the Federal Building in Chicago on the left and its Hanger in Friedrichshafen on the right.

For more information on the Chicago flight of the Graf Zeppelin, click on the following link:

The 25 C. denomination US airmail stamp shown above (Sc. #C20) was issued on November 22, 1935 for the Inauguration of Trans-Pacific Airmail Service between San Francisco and Manila.

The 25 Cent denomination airmail stamp depicts the "China Clipper" Over the Pacific.

The China Clipper was a Martin M-130 four-engine flying boat built for Pan American Airways.  Its inaugural flight took off from Alameda, California on November 22, 1935, with stop-overs in Honolulu, Midway Island, Wake Island, and Guam.  On November 29, 1935, it arrived at it's destination, Manila, Philippines, carrying over 110,000 pieces of mail.

The Commonwealth of the Philippines also issued stamps for the return flight of the China Clipper back to the United States in December 1935.  They are shown above.

The two US airmail stamps shown above (Sc. #C21-22) were issued on February 15, 1937 for use on the new Trans-Pacific Airmail Service to Hong Kong and to China. 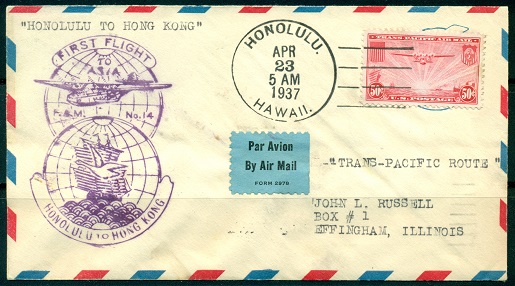 The 30 C. denomination US airmail stamp shown above (Sc. #C24) was issued on May 16, 1939 for the Inauguration of Trans-Atlantic Airmail Service.

The design is similar to the previous winged-globe type airmail stamps, but for the addition of the inscription "TRANS-ATLANTIC" and ships-at-sea shown in the lower background.

The simple but elegant design features an eagle holding a shield, olive branch, and arrows.

The normal color of the stamp is dark blue & carmine.  It also exists in an ultramarine & carmine shade (Sc. #C23b), which is very scarce.