US airmail stamps were first issued in 1918, however aviation and airplanes were not new philatelic concepts at the time.

The first government-issued stamp of any country in the world to show an airplane was actually a US 20 Cent denomination Parcel Post stamp issued in 1913.  It is shown above (Sc. #Q8).  The caption underneath the vignette reads: "AEROPLANE CARRYING MAIL".

The first US Airmail stamps, or US definitive postage stamps issued for use on airmail letters, were issued in early 1918.  They are shown above (Sc. #C1-3), arranged in the order of their issue dates.

Note that the stamps are inscribed "U.S. POSTAGE".  They were available for use on regular letter mail, as well as on airmail, which was still highly experimental.

The central designs feature a "Curtiss Jenny" Biplane in Flight.  The "Jenny" was originally produced as an Army training aircraft during World War I.  In the years after the war, the plane became the backbone of US civil aviation.

The carmine and blue 24 Cent denomination stamp (Sc. #C3) was issued on May 13, 1918 for the Inauguration of Airmail Service between Washington, Philadelphia, and New York, on May 15, 1918.  The postage rate was 24 Cents per ounce, which included immediate delivery to the addressee.

The green 16 Cent denomination stamp (Sc. #C2) was issued on July 11, 1918, when the airmail postage rate to the tri-city area noted above was reduced to 16 Cents per ounce.

The orange 6 Cent denomination stamp (Sc. #C1) was issued on December 10, 1918, when the airmail postage rate to the tri-city area noted above was again reduced to 6 Cents per ounce.

Shown above is an example of the famous "Inverted Jenny" error (Sc #C3a).  A single pane of 100 stamps was sold to a collector at the Washington, D.C. Post Office on May 14, 1918.  Postal inspectors tried to buy the sheet back from the collector, but he hid it from them.  The collector later sold it to a Philadelphia stamp dealer for $15,000.  The dealer later resold it to another collector for $20,000.

How many of these stamps that have survived, almost 100 years later, is unclear.  It is believed that about six of the original stamps from the sheet have been destroyed over time.  That would leave the population at about 94 stamps today, less a block of 8 stamps, two blocks of 4 stamps, and a plate block of 4 stamps that were originally removed from the sheet after it was resold.

The example shown above was sold in a November 2007 Robert A. Siegel auction for $977,500.00.  Even if one could locate an example of this very rare stamp for sale, the cost today would probably be well over One Million US dollars.  Donald Sundman, the president of Mystic Stamp Co., acquired the plate block through a trade with one of his clients.  Here's a LINK to the public-domain image of the unique plate block.

The three US airmail stamps shown above (Sc. #C4-6) were issued during August 1923 for Night-Flying Airmail Service between New York and San Francisco, though they were also valid for regular letter mail.  These stamps were placed on sale at the Philatelic Bureau in Washington, D.C. on the dates of issue, but they were not distributed to post offices until much later.

Three zones were established:  New York - Chicago, Chicago - Cheyenne, and Cheyenne - San Francisco, with the airmail postage rate being 8 Cents for each zone.  This new airmail service was inaugurated on July 1, 1924. 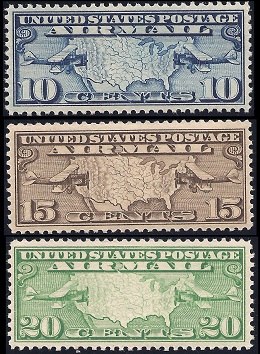 The three definitive US airmail stamps shown above (Sc. #C7-9) were issued during 1926 and 1927.  These were the first stamps specifically inscribed for use on airmail letters.

The designs feature a map of the United States and two mail planes. 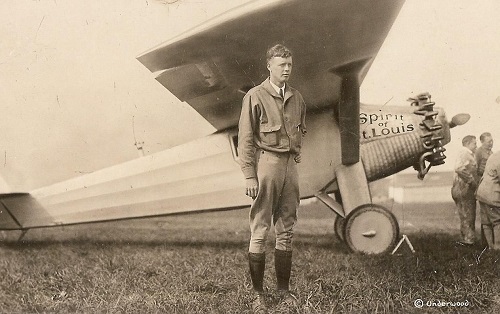 Charles Lindburgh and "The Spirit of St. Louis"
from an old postcard

The design of these US airmail stamps features Lindbergh's plane, "The Spirit of St. Louis" and a Map of the Flight Route.

Charles Augustus Lindbergh (1902-1974), a.k.a. "Lucky Lindy" and "The Lone Eagle", was an aviator, author, inventor, explorer, and social activist.  In 1925, he was hired by the Robertson Aircraft Corporation of St. Louis, Missouri, where he served as an airmail pilot until early 1927.  Then, he skyrocketed to instantaneous world fame.

In 1919, Raymond Orteig, a New York hotel owner, had offered a prize of $25,000 to the first aviator to successfully complete a non-stop flight from New York to Paris.  Several aviators had attempted the flight unsuccessfully, until 1927, when Charles Lindbergh took up the challenge.

The single-engine monoplane, "The Spirit of St. Louis", was specially constructed for the flight attempt.  The inside of the plane contained only essential navigation equipment, being pretty much a gigantic "fuel tank".  The plane had no cockpit window, requiring that Lindbergh look out the side door window to visually see where he was going.  The cramped cockpit of the plane was only 36 inches wide x 32 inches long, by 51 inches high, requiring the pilot to sit in a crouched position for the entire flight. 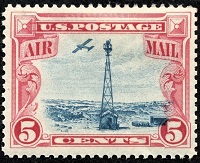 The 5 Cent denomination US airmail stamp shown above (Sc. #C11) was issued July 25, 1928 to meet the new airmail letter postage rate.  Effective August 1, 1928, the rate was again reduced to 5 Cents per ounce.

The vignette of this large format stamp features a Beacon on the Rocky Mountains, a necessity in mountainous areas, to warn pilots so they don't accidentally run into the mountains, during night-time flying or during times of limited visibility.