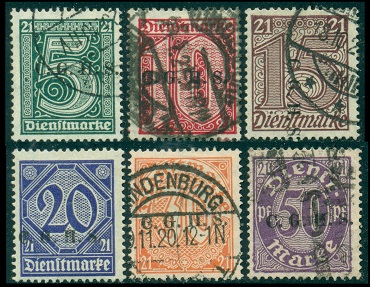 In April 1920 the German Local Official Stamps for the State of Prussia were overprinted "C.G.H.S." for government use in the plebiscite territory.  C.G.H.S. stands for the French: Commission de Gouvernement Haute Silesie. All of them, except for the 1 Mk. denomination stamp, are shown in the image above (Mi. Dienstmarken #1-7, Sc. #O32-38).

The standard orientation of these overprints is either horizontal or vertical ... Michel Types I-IV shown below.  These overprint varieties all sell for the normal catalog values.

For the more budget-minded collector / specialist, who would like to specialize in overprint varieties, this is THE STAMP ISSUE TO COLLECT!

The Michel Deutschland-Spezial-Katalog lists 20 different orientation types for these overprints!  They are all illustrated below, with headings describing each type.

Types V-XX DO HAVE a premium (German: aufschlag) associated with them, and it is shown in each of the headings.  Even with the premiums added to the regular catalog prices though, they are quite inexpensive.

Overprint Upright, from the top.
Aufschlag: 0%

Overprint Upright, from the bottom.
Aufschlag: 0% 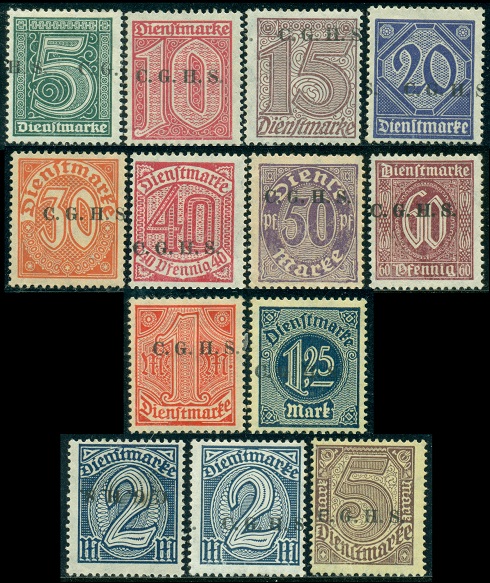 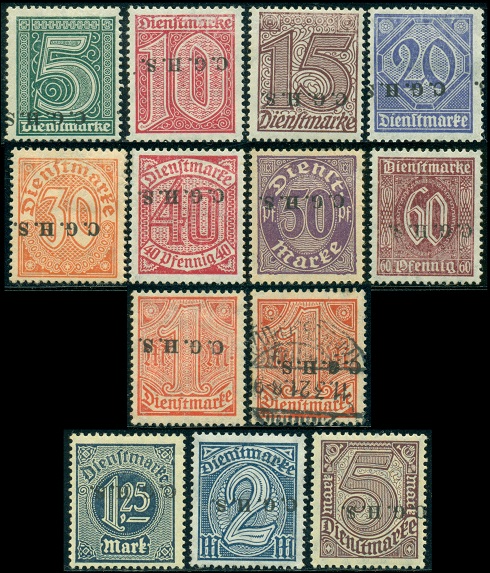 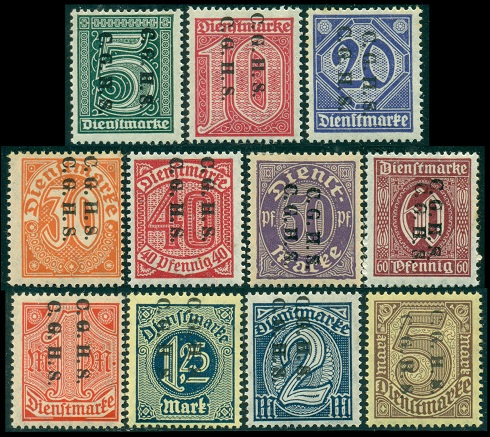 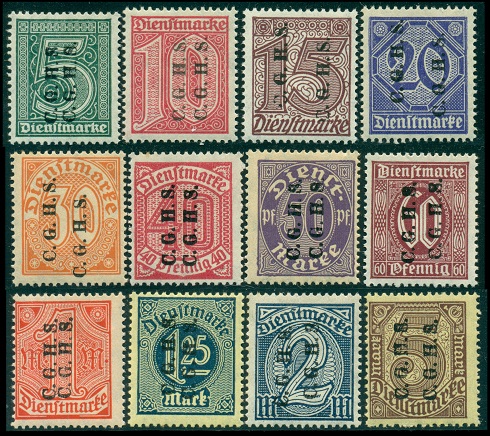 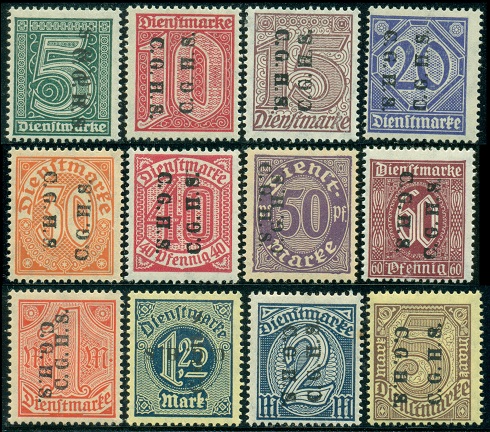 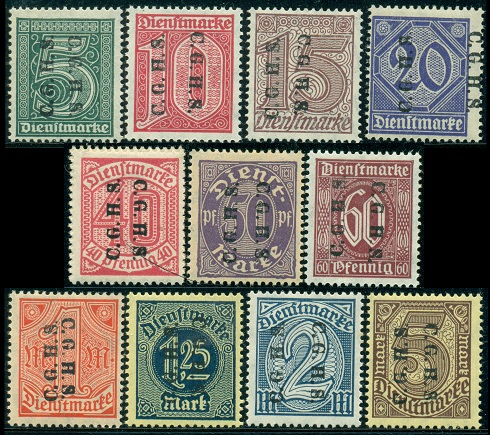 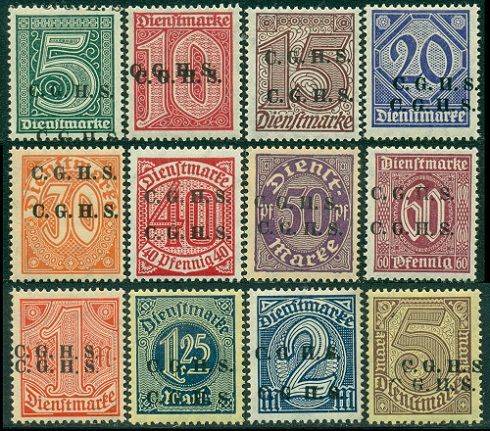 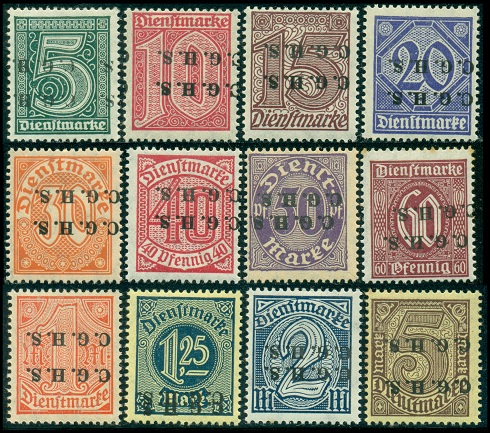 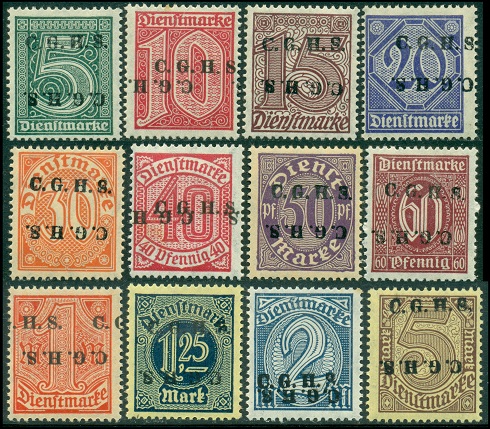 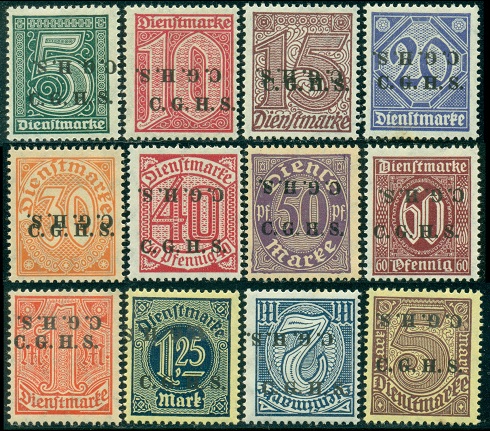 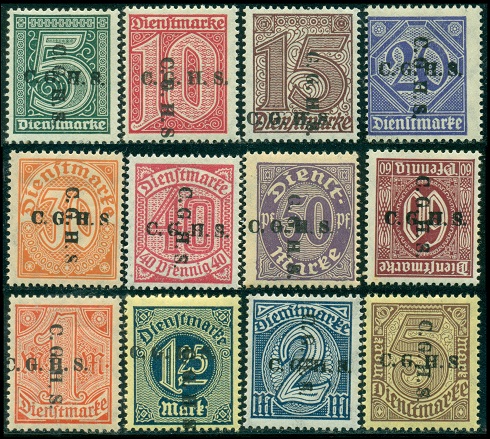 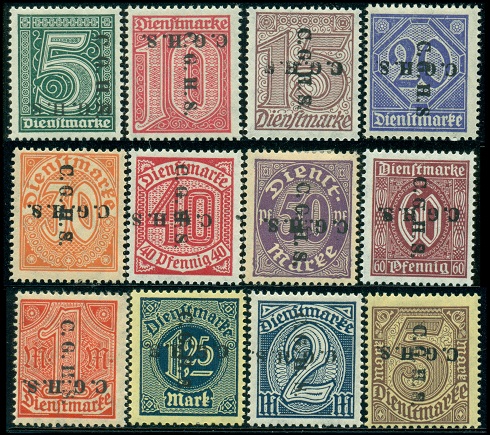 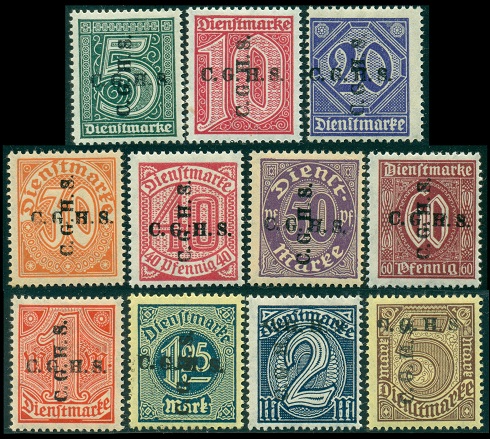 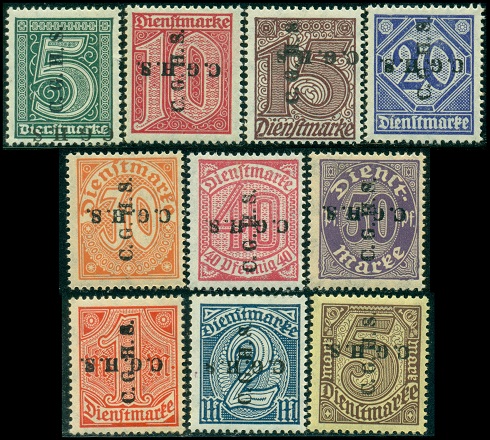 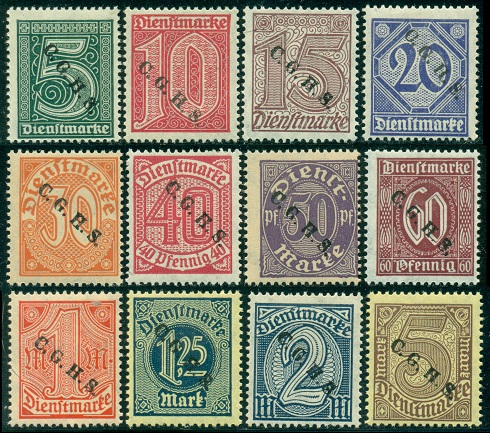 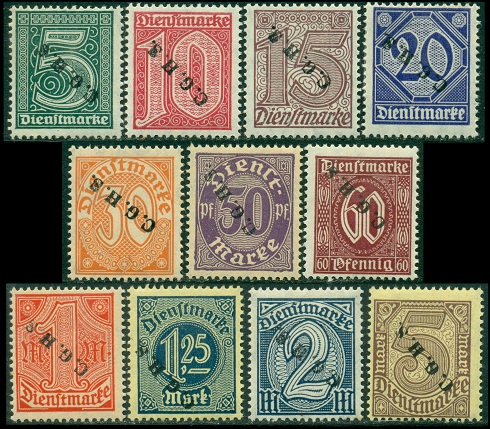 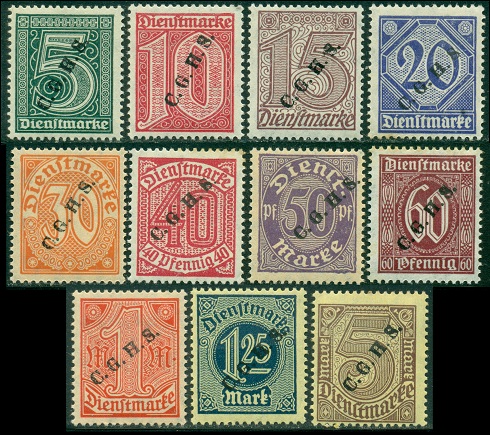 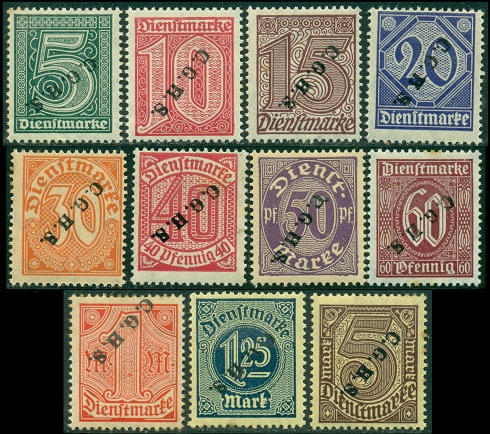 The Michel catalog indicates that these Upper Silesia Plebiscite stamps are "speculative" .... meaning that they were probably intentional printer's creations of the period and NOT actual printing errors.  Nevertheless, they are interesting, inexpensive, and they do make an impressive display.

When shopping the internet though, shop around and do not pay high prices for them.  I have noticed some sellers that charge exorbitant prices for these, as errors, taking advantage of novice specialists.  A little comparison shopping will serve the specialist well and will save a lot of money.

The overprint shown above was hand-stamped during 1920 on the contemporary issues of Germany for use as official stamps by the French Occupation forces in Upper Silesia.  The German stamps utilized were the 1906-1919 Germania definitive stamp series from the 2 Pf. through the 2 Mk., the 1919-1920 National Assembly commemoratives, and the two charity stamps issued in 1919.

One should be very wary of any stamps with this overprint that are offered for sale, especially if they are not authenticated.

According to the Scott Catalog, there are two classes of these overprinted stamps ... Originals and Reprints, with there being minor differences in the overprint between the two.

The Scott Catalog lists only the reprints (Sc. #O1-31, #05a // 26a), with the following footnote: "Values are for reprints made with a second type of handstamp differing in minor details from the original (example: period after "S" is round instead of the earlier triangle form).  Originals are scarce. Counterfeits exist."

The Michel Deutschland-Spezial-Katalog lists only the originals (Mi. French Occupation #1-34) with a footnote that "forgeries exist".

The reprints, priced in Scott, only have nominal value.  The originals, priced in Michel, are all RARE and extremely expensive.

I searched both the U.S. and Germany eBay sites for these.  I found one lot of the Germania set, with a certificate of authenticity, on the German eBay site, priced at €10,000, and, based on the prices in the current Michel Catalog, that would be a huge bargain!  Other than that, I could not locate even a single stamp, either original or reprint, on the two eBay sites.  I found the scan above in an old online auction catalog.  Its current Michel catalog value is €2,200.