For the Third Reich, the premiere philatelic event of 1935 was the OSTROPA Philatelic Exhibition in Königsberg, East Prussia. In German, OSTROPA stands for Osteuropäische Briefmarken-Ausstellung, or East European Stamp Exhibition. The exhibition was held from June 23 until July 3, 1935. 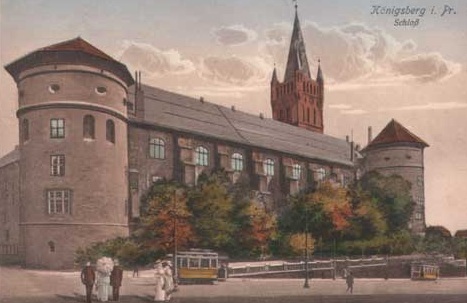 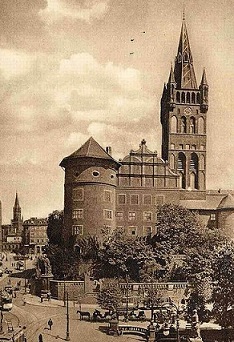 The philatelic exhibition was held in the Königsberg Castle, which was on Steindamm Street, one of the prominent thoroughfares of the city-center. The postcards, shown above and to the left, show early 20th Century views of the castle.

Königsberg was founded by the Teutonic Knights in 1255 and was the capital of East Prussia after 1772. This Baltic port developed into a German cultural center.

The castle was begun in 1255, and then it was greatly enlarged from the 16th to 18th Centuries. It eventually became the residence of the Prussian Kings, and King Wilhelm I of Prussia was coronated there in 1861. After the fall of the German Empire, and into the early part of the Third Reich, it was the Prussian Museum and was open to the public.

The Allied bombings during World War II obliterated the center of the city of Königsberg, and the castle was destroyed by a fire as a result of the bombings.

At the end of World War II, the city was annexed by the Soviet Union and renamed to Kaliningrad. German residents were expelled and the city was re-populated by Soviet citizens. Though the Soviets built a modern city there, the ruins of the castle remained. In 1968, Soviet Premier Leonid Brezhnev ordered the ruins demolished, as a relic of "Prussian militarism". Most of the treasures that were in the palace museum, prior to the Soviet occupation, have never been recovered. 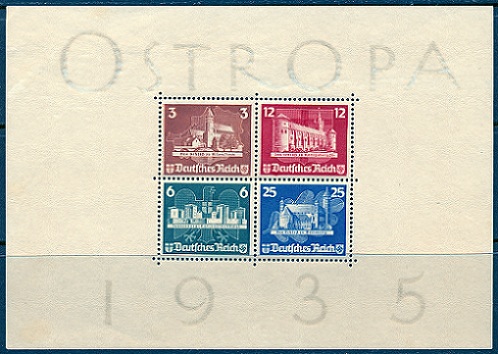 The Third Reich issued the OSTROPA Souvenir Sheet shown above (Mi. #576-79 (Block 3), Sc. #B68) on June 23, 1935, the first day of the philatelic exhibition. The souvenir sheets were provided, with the purchase of an admission ticket to the exhibition, which was 1.70 Reichmarks.

IMPORTANT NOTE. The gum used for the OSTROPA souvenir sheet contained sulfuric acid. Over time, this will cause the paper to stain a dark brown and eventually disintegrate. If the sheets are left, with original gum, it will destroy them. Collectors MUST remove the gum, in order to preserve them, and a collector should NEVER BUY ONE OF THESE WITH ORIGINAL GUM, if any of them still exist INTACT, after 80+ years.

The Michel Catalog has a special note on this in their catalog. They indicate that the MINT price for the souvenir sheet is for one that is "toned a light brown color" and that is "WITHOUT GUM". The Scott Catalog has a similar notation, as well.

The designs of the four stamps in the souvenir sheet are as follows. 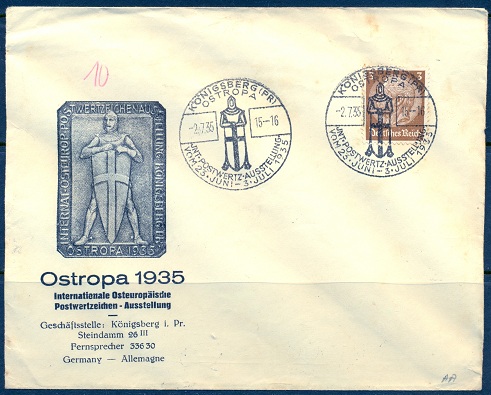 Two Ship postmarks exist for the exhibition, as well. They are the "1935 / CRANZ-ROSSITTEN SCHIFFSPOST" postmark and the "1935 / SCHIFFSPOST / GROSSES MOOSBRUCH" postmark.