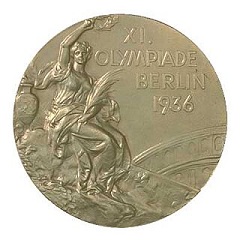 In 1936, the Third Reich had the distinction of hosting both the Winter Olympics and the Summer Olympics. This was the Reich's opportunity to show off their new country to the world, and they succeeded in doing a splendid job of it.

A gold medal from the 1936 Olympics is shown at the upper left. The actual medals the athletes received had different designs for each of the sports. These games had the largest and heaviest medals ever awarded to athletes: 100 mm diameter, 4 mm thick, and 324 grams!

Philatelically, there were multiple postage stamps, postal cards, and souvenir sheets issued for the occasion, which will all be presented below. 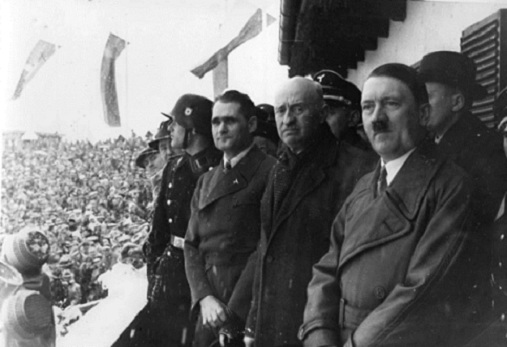 Some notes from the 1936 Winter Olympics:

The country that won the most medals was Norway, having won a total of fifteen medals. Germany came in second with six medals. The USA was eighth, with four medals. Sonja Henie of Norway won the gold medal in Women's Figure Skating. The USA won its only gold medal in two-man bobsledding.

The 1936 Olympics was the last time in history that both the Winter Olympics and the Summer Olympics have been held in the same year. 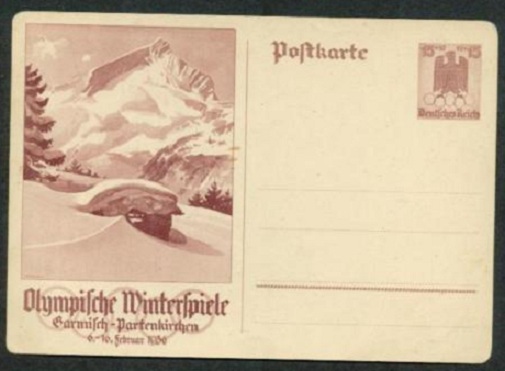 The postal card above was issued in the Third Reich for the Winter Olympics in Garmish-Partenkirchen and depicts a mountainside scene. I think there's a house in the foreground somewhere, although it is almost completely covered up by snow! 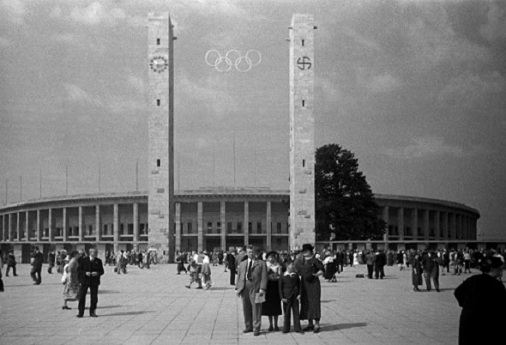 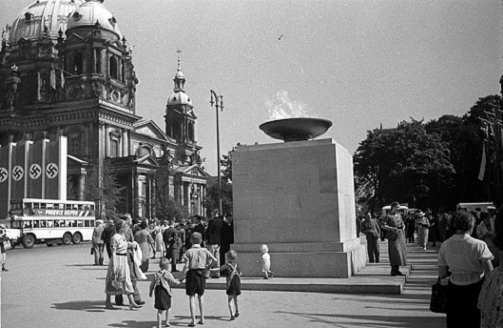 The stamps, from the lowest to the highest denomination, depict the following events: horizontal bar, diving, soccer, javelin throwing, a torch runner, fencing, sculling, and equestrian.

These stamps exist with many commemorative cancellations, which were available at postal stations at almost all the athletic event locations, during the Summer Olympics.

Some notes from the 1936 Summer Olympics:

These games were the first to have live television coverage. The German Post Office broadcast over seventy hours of coverage to special viewing rooms throughout Berlin and Potsdam.

The Olympic Flame was used for only the second time at these games. This was the first time it was brought to the Olympic Village by a torch relay, with the starting point in Olympia, Greece.

Basketball was added to the program for the 1936 Olympics. In the final game, the United States beat Canada 19-8. The contest was played outdoors on a dirt court in driving rain. Because of this, the teams could not dribble, so the scores were minimal.

In a couple of very sad notes, a portent of horrible events to come ... Gretel Bergmann, the German national record holder in the high jump, was excluded from the German team because she was Jewish. American sprinters Sam Stoller and Marty Glickman, the only two Jews on the U.S. Olympic team, were pulled from the 4 × 100 relay team on the day of the competition. It was speculated at the time that the U.S. Olympic Committee leader did not want to add to the embarrassment of Hitler, by having two Jews win gold medals. 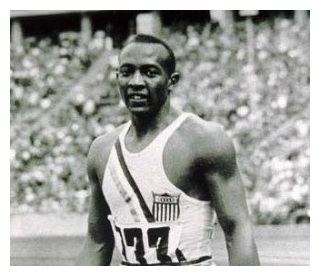 Adolph Hitler wanted these Olympics to showcase the Third Reich's "superior" Aryan athletes, and many of them did do very well, but the athlete that "stole-the-show" was an African-American athlete on the United States team by the name of Jesse Owens. Jesse Owens, shown at left, wound up winning four gold medals in the sprint and long jump events.

One common belief of Hitler, snubbing African-American athlete Jesse Owens, has been discovered to be technically incorrect. On reports that Hitler had deliberately avoided acknowledging his victories and had refused to shake his hand, Jesse Owens reportedly recounted: "When I passed the Chancellor, he arose, waved his hand at me, and I waved back at him ..." He also reportedly stated: "Hitler didn't snub me — it was FDR who snubbed me. The president didn't even send me a telegram."

Hitler was criticized for this, and the Olympic committee officials insisted that he greet each and every medalist, or none at all. Hitler did not attend any of the medal presentations which followed, including the one after Jesse Owens won his four medals, and he met with German winners outside the stadium afterward. 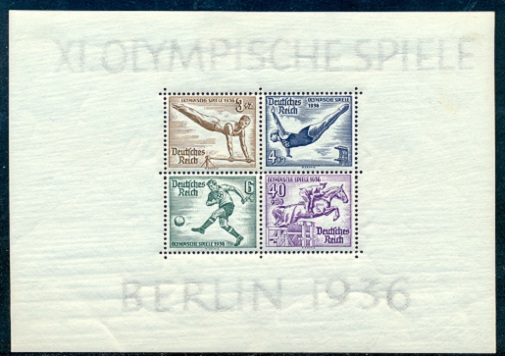 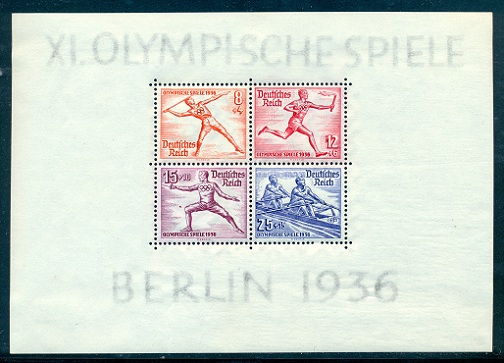 The sheet portion was watermarked "XI OLYMPISCHE SPIELE / BERLIN 1936", and the stamps themselves were watermarked swastikas.

The same commemorative cancellations noted for the May issue were also available for these sheets at all the Olympic events. 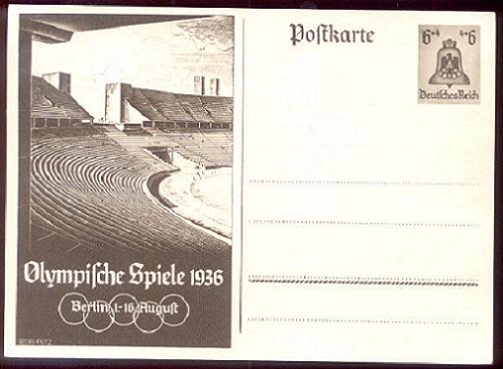 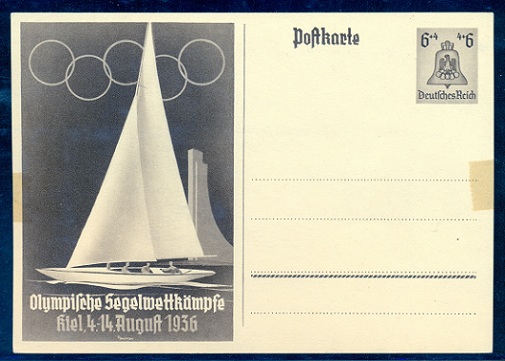 The two postal cards above were issued in the Third Reich for the Summer Olympics. The first card depicts the Olympic Stadium in Berlin. The second card depicts yacht racing, held in Kiel.