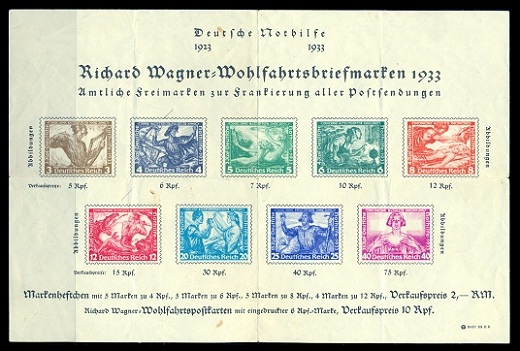 The Third Reich issued their first postage stamps, of a commemorative nature, in late 1933. These new stamps were nothilfe issues. "Nothilfe", in German, literally means "emergency assistance". In the philatelic World, these types of postage stamps are known as "charity" or "semi postal" stamps, with the surcharges on them generally going to charitable organizations.  For the purposes of this website category though, they will be considered as Commemorative stamps, and they will appear in those link pages.

The year 1933 also marked the 10th anniversary of the first German nothilfe stamps of 1923, which had been issued to provide emergency aid to the victims of the Rhine-Ruhr floods during that year. 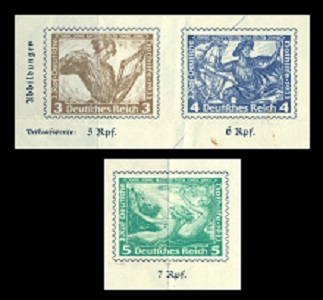 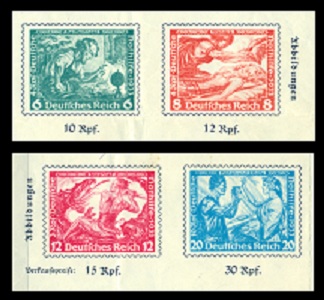 The four images above show enlarged details of the Third Reich postal bulletin at the beginning of this page. The text of the postal bulletin can be roughly translated into English, as follows:

The set of nine new Third Reich semi-postal stamps, showing scenes from Richard Wagner's (1813-1883) operas, is shown in the three images above.

The nine designs are as follows (in German).

These stamps were issued by the Third Reich on November 1, 1933, and they were only sold in Munich and Bayreuth during the Wagner Festival. They are the first German stamp issue to feature the new swastika watermark.

The catalog attributes, for stamps that are perforated 14 x 13, are as follows.

The catalog attributes, for stamps that are perforated 14, are as follows. 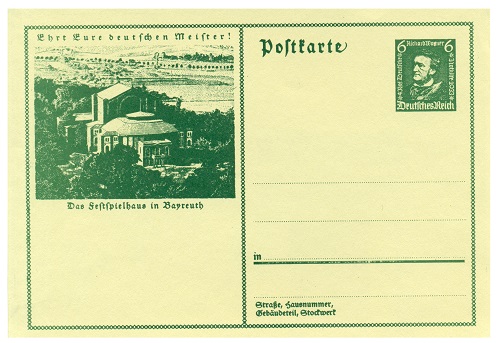 The 6 Pf. + 4 Pf. postal card shown above was issued as the companion to the set of Wagner Opera Semi-Postal stamps.

The stamp imprinted on the card features a portrait of Richard Wagner (1813-1883).  The picture on the front depicts the Festival Hall at Bayreuth.

Adolph Hitler was an enthusiastic fan of all the Wagner operas.  His favorite opera was Die Meistersinger, and it is said that he could quote the entire opera from memory. 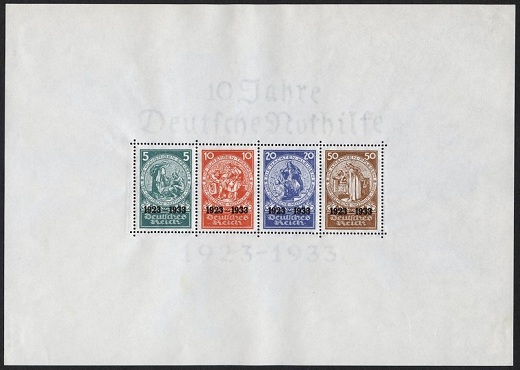 This Third Reich souvenir sheet (Mi. #508-11 (Block 2), Sc. #B58) was issued on November 29, 1933, to commemorate the 10th anniversary of German Nothilfe stamps. The stamp designs are identical to the 1923 Nothilfe issue, except for the overprint and the fact that these stamps are printed se-tenant. The images above show the complete souvenir sheet and an enlargement of the four stamps in the souvenir sheet.

The souvenir sheet sold for 3.50 Reichsmarks. Only about 64,000 were printed, and they are very scarce today.