During the twelve years of the Third Reich, horse racing was a very popular spectator sport. People flocked to the annual national races in great numbers, even in the waning days of World War II, when going to large public events meant taking the chance of getting caught in an Allied bombing raid, but that didn't stop them at all. Aside from the wagering aspects of the races, they were also major social events, as is the Kentucky Derby, in the United States, today.

During the period from 1936-1944, the Third Reich sponsored a number of national horse races. As a result, quite a few surtaxed postage stamps of the collecting thematic, horses on stamps, were issued. The surtaxes on these German stamp issues usually went to pay for the event or to provide the funding for the sweepstakes prize.

The Brown Ribbon of Germany

The Brown Ribbon of Germany was an annual July horse race run in Munich (Riem), from 1934 to 1944. One of the best known racing venues in Germany was the race track at Riem, just a few short miles from Munich. It was the home of International Racing Week, and as part of the Brown Ribbon of Germany, all sorts of of events took place - track racing, hurdles, and even steeplechase.

Surtaxed postage stamps (below) were first issued for the event in 1936 and the issues were continued annually until 1944. All of these issues feature horse themes, and the stamps are marvelous examples of the engraver's art.

1938 (left). Goddess of Victory riding a horse, extending her left arm, in which she holds a victory wreath.

1940 (left). Ancient warrior, holding wreath of victory, and riding in a chariot, drawn by three horses. 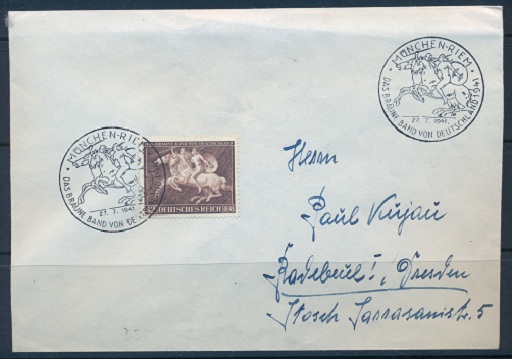 The German Derby is an annual race for three-year-old colts and fillies, usually run in Hamburg around July. 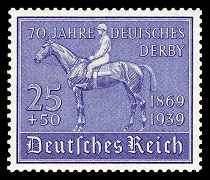 1939 (Above). Race horse "Investment" and jockey. Issued to commemorate the 70th anniversary of the German Derby. The surtax was divided between Hitler's National Culture Fund and the race promoters.

During the Second World War, the German Derby became known as the "Grosser Deutschlandpreis der Dreijahrigen" um "Das Blaue Band" or, loosely translated, the "Greater Germany Sweepstakes of Three-year-olds" in "The Blue Ribbon" race. Surtaxed stamps (below) were issued during 1940-1942 for the race, which was run in Hamburg. In 1943 and 1944, the race was relocated to Hoppegarten. 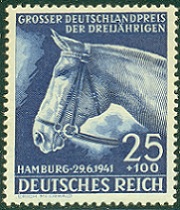 The Grand Prize of Vienna at Freudenau

The race track in Freudenau, the port section of Vienna, was built in 1839 by the Vienna Horse Racing Society. The Imperial Box and the covered grandstands were added in 1870. Historically, in Austria, horse racing was a huge spectator sport during the Imperial period, especially for the upper classes, royalty, and military officers. 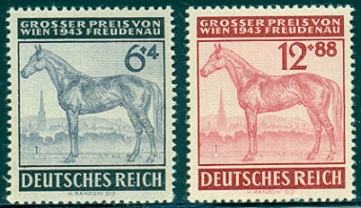 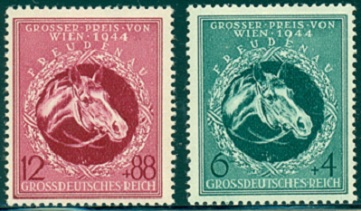 The two sets of stamps, shown above, were issued in 1943 and 1944 under the Third Reich for the Vienna horse race in Freudenau.

For the thematic / topical stamp collector or the philatelist, all the Third Reich horse racing stamp issues shown on this page are available with many fancy, commemorative cancels, both on piece and on commercial and philatelic covers. Imperforate examples of a couple of them are available, as well as ephemera, such as postcards and tickets.