The Third Reich continued the use of the President Paul von Hindenburg Medallion definitive stamps, first issued in 1932 under the Weimar Republic.

Beginning in 1934 though, the Third Reich postal service started printing the stamps on swastika watermarked paper. All the denominations were printed in this manner during 1934, except for the 1 Pf. (Dec. 1933) and the 80 Pf. (Feb. 1936). The set of seventeen denominations is shown above.  A couple of the denominations exist with sideways watermarks, and as such, they are very scarce.

The catalog details, for stamps with the swastika watermark, are as follows. 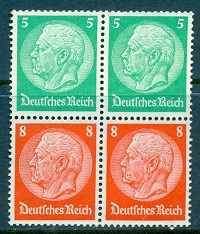 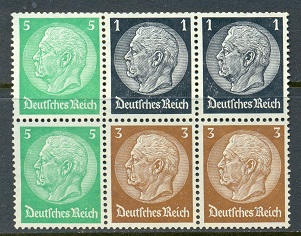 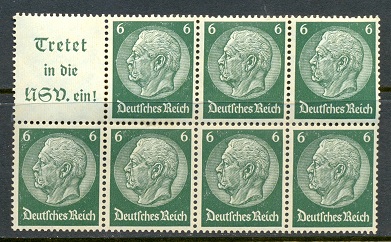 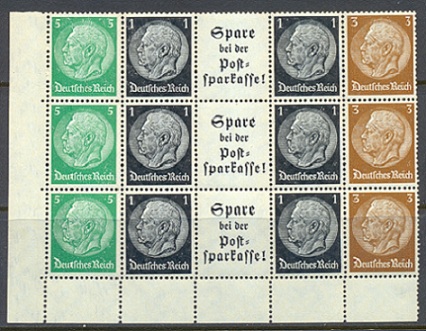 A selection of various Booklet Pane / Sheet combination multiples are shown in the five scans above.

Some of the booklet and stamp combinations can be very expensive!

At first sight, the stamps shown above may appear to be a "Reklame" or "Advertising Label" pair from a booklet pane, such as those used in some of the very rare Germania stamp booklets issued by the Imperial Post Office during 1910 and 1911.

This is NOT TRUE. 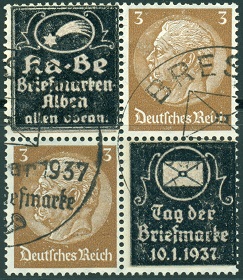 To celebrate Stamp Day in 1937, sheets of the 1934 3 Pf. denomination Hindenburg definitive postage stamps were "privately overprinted" in a checkered pattern, utilizing two different advertising labels, as shown in the used block above.

Though privately created, the un-overprinted stamps in these sheets were valid for postal use, and combination pairs / blocks did pass through the mails.  Used examples are much scarcer than mint examples.

Though a philatelic creation and not a government issue, these varieties are very collectible and are popular with specialists.  Mint pairs and blocks are inexpensive.  Used pairs and blocks are moderately expensive.  I saw a complete sheet of 100 out on the internet recently, offered by a German eBay seller.  It was priced at 500 Euros!

If the visitor would like to look at some of these stamps out on the Germany eBay site, please follow this LINK.  Make sure the German seller ships to the United States though, before bidding on or buying any of his lots.