The Third Reich began issuing adhesive stamps for Military Airmail and Military Parcel Postage services in 1942. Prior to this, military letters and packages had only postal markings, and they were not franked by postage stamps. All of these military mail or feldpost stamps are non-denominated. 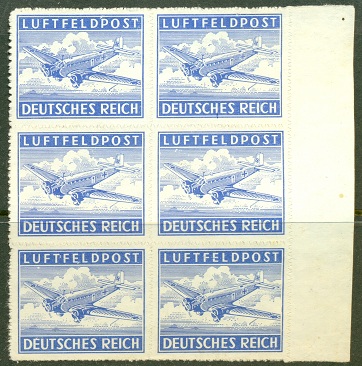 The block of Military Airmail stamps shown above (Mi. #1B, Sc. #MC1a) was issued in 1943. The stamp is identical to the 1942 issue, but this later variety is rouletted, instead of perforated. 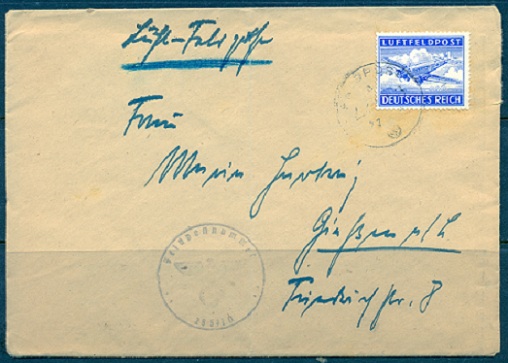 Shown above is a Feldpost cover, franked with the perforated Military Airmail stamp. The script used by this soldier is nearly impossible to read, but the cover contains a letter that is dated December 31, 1942. The stamp is tied by a non-discernible Feldpost postmark, and there is a Feldpost hand-stamp on the lower part of the cover. 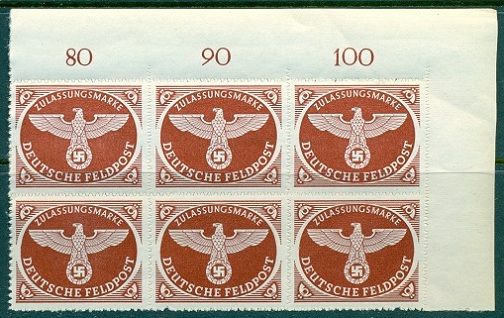 The Military Parcel Post stamps shown above (Mi. #2B, Sc. #MQ1a) were issued in 1943. The stamp is identical to the 1942 issue, but this later variety is rouletted, instead of perforated. 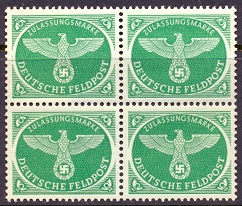 Also in 1944, there was a new issue of the Military Parcel Post stamp (shown above) (Mi. #4, Sc. #MQ2). The new stamps were a smaller size, perforated 14, and they were printed in bright green instead of the red brown color of the older stamps.


There were other local and unofficial feldpost stamps issued between 1943 and 1945, as well .....  The best known of these are the famous Tunis local feldpost stamps of 1943, showing a palm tree, and the rare Rhodes overprint of 1944.  There are also quite a few "INSELPOST" or "Island Mail" overprints on the official government feldpost stamps, which were used in the Mediterranean Area between 1944 and 1945.  Lastly, there is a stamp printed for use by the U-Boat "Hela" during March 1945.  They are all listed in the Michel catalog.

As with all specialized Third Reich material of this type, authenticated originals are rare, and forgeries and reprints are plentiful!  Be very careful when buying any of these local feldpost or inselpost stamps, unless they have been properly authenticated!