Stamps of the Third Reich (1933-1945) and related World War II stamp collecting subjects are very popular areas with both stamp collectors and philatelists. The stamps issued during this period are colorful, plentiful, and make wonderful looking displays. They offer the collector, not only postage stamps, but also a multitude of other collectible ephemera of the era. Related collectibles are booklets, postal cards, colorful propaganda postcards and labels, civilian postal history, and a multitude of military postal history items.

The German Empire did not start World War I -- The Austro-Hungarian Empire did. It all began in the Summer of 1914, when Archduke Franz Ferdinand, the heir to the Austro-Hungarian imperial throne, was assassinated in Sarajevo, Bosnia & Herzegovina, by a Serbian anarchist. Not long after this, Austria invaded the Kingdom of Serbia. Long-term causes, such as imperialistic foreign policies of the great powers of Europe, the German Empire, the Austro-Hungarian Empire, the Ottoman Empire, the Russian Empire, the British Empire, France, and Italy -- played a major role. Due to a complex matrix of alliances formed over previous decades, they were all at war with each other within weeks of the assassination incident. As all of these empires had colonies, the conflict soon spread around the world.

But, the German Empire got the full brunt of the blame for the war by the victorious Allied forces. The Treaty of Versailles was very harsh and humiliating to both Germany and to the Germanic people. On top of that, Germans endured unspeakable hardship during the periods of hyper-inflation and then the Great Depression in the 1920's and early 1930's. It was indeed a hopeless situation for Germans, and this hopelessness was a time-bomb waiting to go off!

And then, Adolph Hitler, who was actually a naturalized German citizen of Austrian birth, and the National Socialist German Workers (NAZI) party appeared on the political scene. The Nazis pledged the re-shaping of the German republic, German society, and to bring back prosperity and PRIDE to the Germanic people. It worked. Soon the Nazi party took control of the German Parliament, and the new Third Reich was born.

When Hitler came to power in 1933, he and his party began re-shaping the political and social framework of Germany. By the mid-1930's, he had turned the Third Reich into a powerful industrial and military state, and had again brought a sense of pride back to the Germanic people. Prosperity returned at a very high price though. Following the consolidation of the neighboring Germanic states into a single nation in the late 1930's, the Third Reich set out on its conquest of Europe, triggering the beginning of World War II.

There was a darker side to the social and political agenda of the Third Reich. As I have read in an article recently, Hitler's long-term dream was to create an Aryan Empire from the Ural Mountains to the Atlantic Ocean. Everyone knows what happened to the 6,000,000 Semitic peoples of Germany and Europe during the 1940's. But they weren't the only ones. The Nazi's also considered the Slavic peoples of Eastern Europe and the Soviet Union as being sub-human. This fact is not as well publicized as the Holocaust, but one must remember that the death toll of the Slavic Eastern European and Soviet people during World War II was over 20,000,000. Other groups the Nazi's had extermination plans for were the Romani (Gypsies), people with disabilities, homosexuals, Jehovah's Witnesses, and other political and religious opponents they disagreed with. If the Nazi's had succeeded in establishing their Aryan Empire, it could have been much worse.

As a result of Hitler's extreme empire-building goals, he not only destroyed himself and his party, but he brought the German nation and the German people to the brink of annihilation.

As a reminder of what was really going on underneath all the pomp, pageantry, and propaganda of the Third Reich, I keep the cover below prominently displayed in my collection. 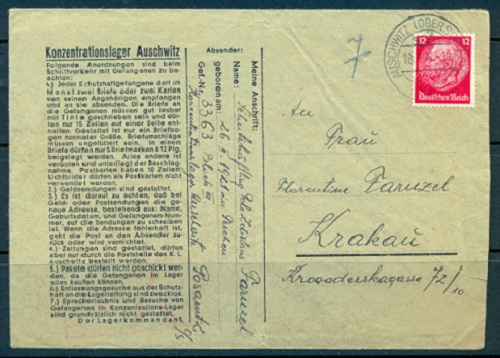 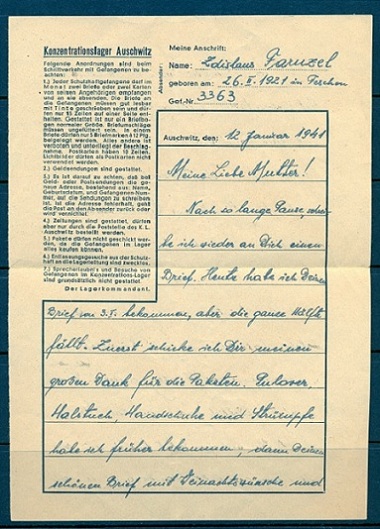 The cover and letter above were mailed from the "Konzentrationslager Auschwitz", or in English, "Concentration Camp of Auschwitz", located in Auschwitz, Silesia, on January 18, 1941. I would presume that this was a prisoner in Auschwitz I. Auschwitz II (Auschwitz-Birkenau - the extermination camp) was not constructed until much later in the year, and Auschwitz III (Auschwitz-Monowitz) was not constructed until 1942. Auschwitz I was primarily a camp for criminal and political prisoners, and those prisoners generally provided forced-labor to the local factories.

The prisoner's name was Ladislaus Faruzel, prisoner #3363 in Block III, and he was born in 1921, being just barely 20 years old in 1941. The letter is written, in German (all prisoners had to write in German), to his mother, Florentinya, at an address in Krakow, Poland. In the obviously heavily restricted letter, Ladislaus is thanking his mother for the Christmas package he received, and is telling her how much he enjoyed it. I'm sure the prisoners quickly learned to self-censor their letters, in order to ensure that their mail went out, and to avoid any "punishment" from the prison authorities.

I was unable to locate any record of the prisoner, with internet-based resources. I did find a reference to another letter, written by his mother, living at the same address in Krakow in 1944, to someone in Auschwitz named Maria. I would presume that Ladislaus very likely never survived his incarceration in Auschwitz.

Return to Third Reich from The Dark Side