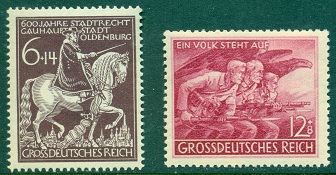 The stamp shown above, at the right (Mi. #908, Sc. #B291), was issued in February 1945 to commemorate the Proclamation of the Volkssturm (People's Militia) in East Prussia to fight the Russians.

The Volkssturm was a German national militia of the last months of World War II. It was founded on Adolf Hitler's orders on October 18, 1944, and it was composed of conscripted males, between the ages of 16 and 60 that were not already serving in some military capacity. 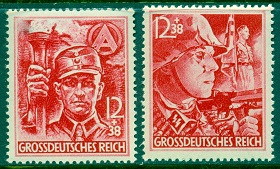 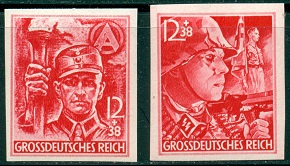 The stamps shown above were the FINAL ISSUE by the government of the Third Reich.

These two stamps also exist imperforate, as shown above at the bottom.  They are a little scarcer than the perforated stamps, but they are worth about the same as the regularly issued stamps. 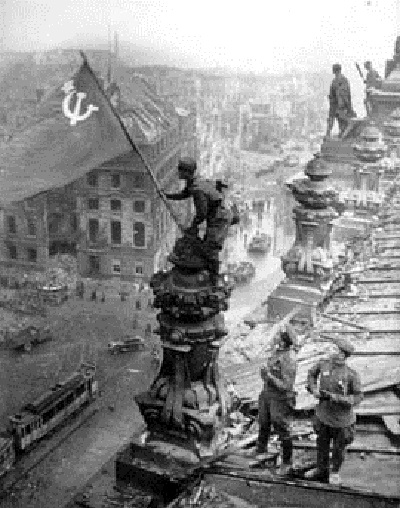 By the end of April, the only things wandering around Berlin were Soviet military vehicles and soldiers.  Anyone else in the city, at that time, was either captured or executed by Soviet soldiers.

By the end of 1945, Berlin was occupied by Soviet, British, and American soldiers, and many of them were looking for valuable "souvenirs" to take home.  It is now believed that most of the canceled and on-cover examples of these stamps were "manufactured" during this time, utilizing back dated hand-stamps.

It would be safe to say that USED EXAMPLES OF THESE STAMPS ARE NOT COLLECTIBLE! 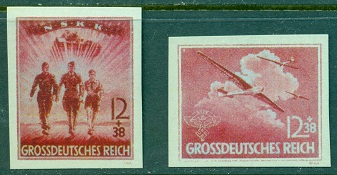 The two stamps shown above are facsimiles on-card of two issues that were planned for May 1945. The originals were imperforate, ungummed, and they were printed in dark rose red and in brownish lilac. These planned postage stamp issues were printed at the government printing offices in Vienna, but they were never delivered to the postal service in Berlin, due to the collapse and surrender of the German Third Reich.

The cartons of printed stamps were discovered by Allied forces in Vienna after the end of World War II, but they were all destroyed. A few loose stamps from the cartons did escape destruction, probably via the pockets of Allied soldiers returning home after the war, and they are prized philatelic rarities today. In the Michel Catalog, they are valued at €24,000 each, which basically means that authenticated examples are NOT OBTAINABLE.

You can get a set of reprints / reproductions, like mine shown above, for about five dollars! 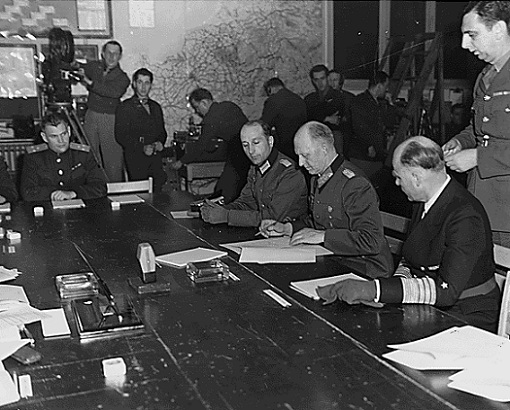 General Jodl Signing the Article of Surrender
May 7, 1945

On April 30, 1945, with the Soviet Army being only 500 meters away from his command bunker in Berlin, Adolph Hitler committed suicide, by a gunshot wound to the head. He and his wife, Eva Braun, were later cremated outside the entrance to the bunker.

On May 7, 1945, in Rheims, France, General Alfred Jodl, on behalf of Grand Admiral Karl Donitz, the new Reich President, signed the document of surrender, and the Third Reich and the War in Europe came to an end!