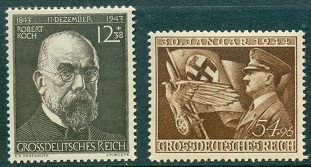 Dr. Robert Heinrich Herman Koch (1843-1910), a German microbiologist, became famous for isolating the anthrax virus and the tuberculosis virus during the 1880's. He was awarded the Nobel Prize in Medicine, for his tuberculosis findings, in 1905. Dr. Koch is considered one of the founders of modern microbiology.

The stamps depict an infant's crib, a public nurse, Mother and Child clinic, and expectant mothers. 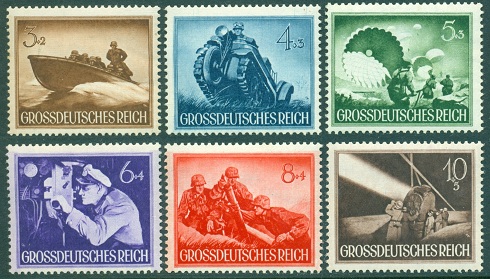 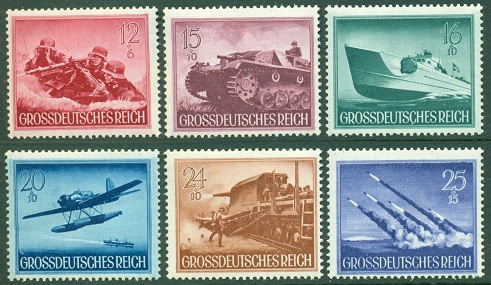 The stamps from the lowest to the highest denomination feature an assault boat, a chain-wheel vehicle, paratroops, a submarine officer, grenade throwers, a searchlight, infantry, a self-propelled gun, a speed boat, a sea raider, railway artillery, rockets, and a mountain trooper. 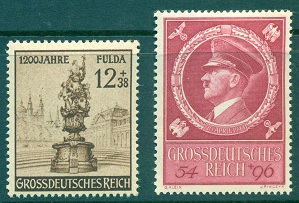 The stamp depicts a Flora Statue in Fulda's Schloss Garden. 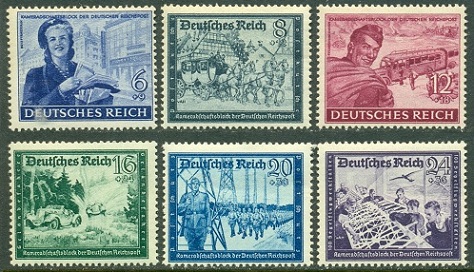 From the lowest to the highest denomination, they feature a woman mail carrier, a mail coach, field post in the east, an automobile race, postal police, and glider workshops.

The two stamps depict labor corpsmen of the Third Reich.

The stamps depict a soldier and a Tirolean Rifleman.

The design features a race horse and a foal.

The design features the head of a race horse in an oak wreath.

The stamp depicts an eagle attacking a serpent.

The stamps depict the gold Nautilus Cup in the Green Vault in Dresden. This stamp exists imperforate, with a value of about $175.00. 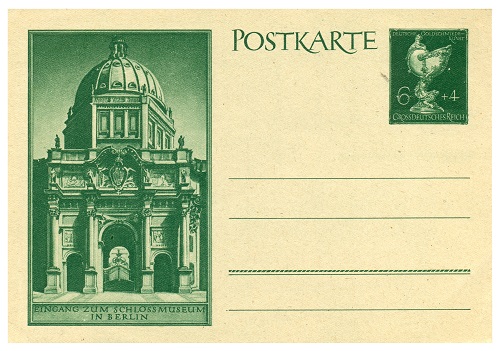 The 6 Pf. + 4 Pf. postal card shown above was the companion issue to the German Goldsmiths' Society set of stamps.  The left side of the card depicts the entrance to the Palace Museum in Berlin.

This was the last commemorative postal card to be issued by the Third Reich.