The stamp shown above, in the middle (Mi. #829, Sc. #B216), was issued on January 26, 1943 to commemorate the 10th Anniversary of the Assumption of Power by the Nazis. The stamp pictures the Brandenburg Gate with the Nazi emblem above it.


The postal card rate stamp shown above, at the right (Mi. #830, Sc. #B217), was issued on January 26, 1943 to enable stamp collectors in obtaining commemorative postmarks. 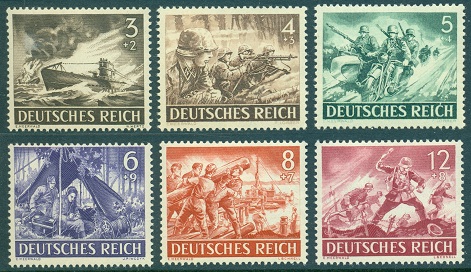 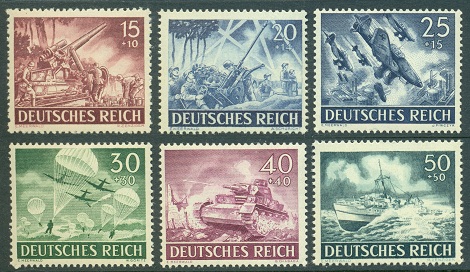 The stamp shown above, at the left (Mi. #843, Sc. #B230), was issued on March 26, 1943 to commemorate the Day of Youth Obligation, when all German boys and girls had to take an oath of allegiance to Adolph Hitler. The stamp pictures two German children in front of the Nazi flag.

This stamp also exists imperforate, and it is valued at about $300.00.

The 3 Pf. denomination exists imperforate and is valued at about $100.00.

The four stamps shown above (Mi. #850-53, Sc. #B237-40) were issued on June 20, 1943 to commemorate the anniversary of the Reich Labor Service (RAD). The stamps depict Labor Service Corpsmen performing various duties. All values but the 6 Pf. exist imperforate.

The RAD was an institution established by the Third Reich in 1934 to reduce unemployment. Its members provided services for various civic, military, and construction projects.


The stamp shown above, at the right (Mi. #859, Sc. #B246), was issued on September 10, 1943 to commemorate the 10th Anniversary of the Winter Relief program. The stamp pictures a mother and her children. 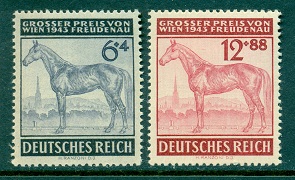 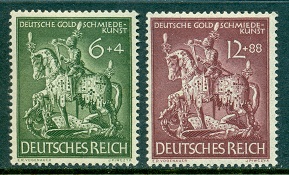 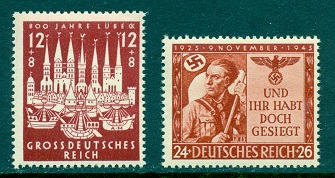 This issue also exists imperforate, and it is valued at about $75.00.


The stamp shown above, at the right (Mi. #863, Sc. #B250), was issued on November 20, 1943 to commemorate the 20th Anniversary of the Munich Beer Hall Putsch and to honor those who died for the Nazi movement. The stamp depicts a Nazi flag bearer, the Nazi emblem, and the inscription "UND IHR HABT DOCH GESIEGT", which translates to "And Despite All, You Were Victorious".