The stamp depicts a Postilion, and it was intended for philatelists to use on postcards for obtaining commemorative postmarks.

The stamp depicts a Roman fasces and a standard with the Nazi emblem at the sides. In the center is a portrait featuring Benito Mussolini and Adolph Hitler. The inscription at the top translates to "TWO PEOPLES - ONE STRUGGLE". 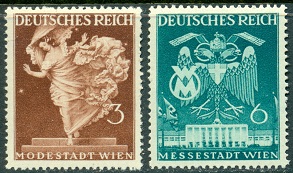 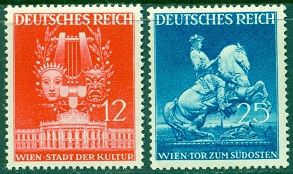 The designs feature Allegory of Fashion, Vienna Fair Hall, the Burgtheater in Vienna, and the Monument to Prince Eugene.

During 1941, six new denominations were added to the 1939 Camaraderie of German Postal Workers set, as shown above (Mi. #773-78, Sc. #B151A / 58A). They are identical to the denominations that they replaced, but the surcharge amounts and the colors have been changed from the original issues. 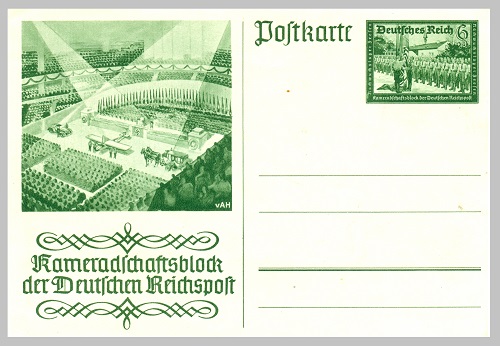 The 6 Pf. + 9 Pf. postal card shown above is the companion issue to the Camaraderie of German Postal Workers set of 1941.

The imprinted stamp design is identical to that of the regular stamp.  The picture on the left side of the card shows the Postal Employees Rally in the Deutschland Hall in Berlin.

The Hoppegarten Horse Racetrack, outside Berlin, was built in the 1920's. Until 1945, it was a mecca for Berlin Area horse racing fans. Today, it is used mostly as a venue for concerts. 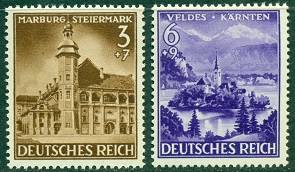 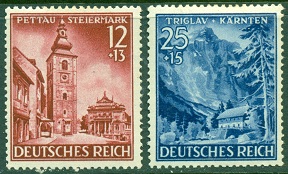 The stamps depict scenes of Marburg, Veldes, Pettau, and Triglav.