The Third Reich issued the set of stamps, shown at the upper left (Mi. #660-61, Sc. #B116-17), on January 28, 1938, to celebrate the fifth anniversary of the Assumption of Power by the Nazis. The stamps depict a German youth holding a torch and a laurel.

Most Austrians probably prefer to call the event the "Annexation of Austria" though. The two stamps were issued simultaneously in Berlin and Vienna, with the first stamp being the German issue and the second stamp being the Austrian issue. 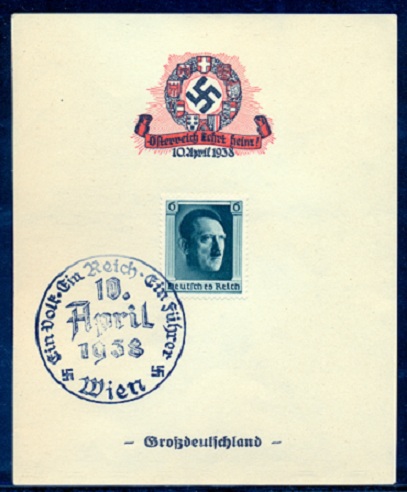 The Anschluß souvenir card above incorporates a Hitler stamp of 1937, which is canceled "Ein Volk - Ein Reich - Ein Führer / Wien / 10 April 1938". This commemorative postmark translates to "One People - One State - One Leader / Vienna". The card features the inscription "Großdeutschland", or "Greater Germany", at the bottom.

There are many different Anschluß related philatelic souvenir cards, postal cards, and covers. They aren't cheap, but they are readily available on the market. 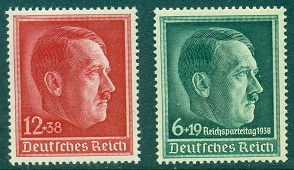 The two German stamps shown above were issued during 1938, and they feature identical portraits of Adolph Hitler. 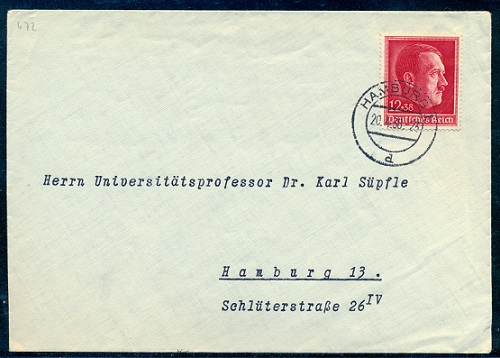 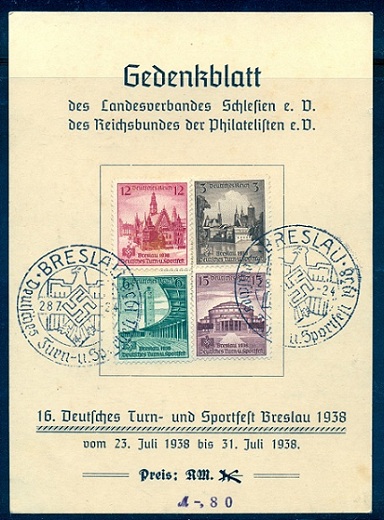 This unofficial commemorative souvenir card, created by the German Philatelic Federation, was canceled on July 28, 1938 at the German Gymnastic and Sports Festival.

This postage stamp depicts a figure of Victory riding a horse and holding a laurel wreath.

The nine semi-postal stamps shown above (Mi. #675-83, Sc. #B123-31) were issued on November 18, 1938 to publicize the scenery and flowers of Austria, now a part of the Third Reich. The surtax was for Winter Relief charities.

By denomination, from lowest to highest, they depict the Castle of Forchtenstein, Flexenstrasse in Voralberg, Zell am See in Salzburg, Grossglockner, Ruins of Aggstein, Prince Eugene Monument, Vienna, Erzberg, a Hall in Tyrol, and Braunau.