The stamp depicts a Heinkel HE70. It was a German mail plane and passenger aircraft of the 1930s. Although useful, it had a relatively brief commercial career, before it was replaced by types which could carry more passengers. Lufthansa operated HE70 aircraft between 1934 and 1937 for fast flight service which connected Berlin with Frankfurt and Hamburg with Cologne. They were flown abroad, between Stuttgart and Seville between 1934 and 1936. 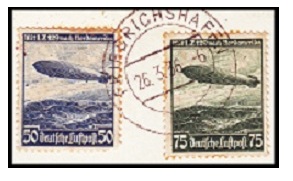 IMPORTANT NOTE: Like the OSTROPA souvenir sheet of 1934, the gum used for these contained sulfuric acid. Over time, this causes the paper to stain a dark brown and eventually disintegrate. This is REALLY EVIDENT with Hindenburg flight covers, where the stamps and the areas of the envelopes around the stamps have dark brown staining! Collectors MUST remove the gum from unused stamps, in order to preserve them, and a collector should NEVER BUY AN UNUSED SET OF THESE WITH ORIGINAL GUM. The prices in the catalogs for these two stamps are for examples WITHOUT GUM. 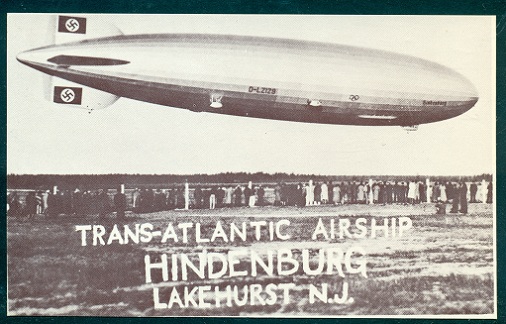 The Hindenburg was a large commercial passenger-carrying rigid airship, and it was the longest (245 meters or 803.8 feet) aircraft of any kind. Designed and built by the Zeppelin Company in Friedrichshafen, the airship was in service from March 1936, until it was destroyed in an accident at Lakehurst, New Jersey on May 6, 1937. The Hindenburg was named after the late Field Marshal Paul von Hindenburg (1847–1934), President of Germany (1925–1934).

The two stamps shown above, at the left (Mi. #604-05, Sc. #470-71), were issued in the Third Reich on February 15, 1936 to commemorate the 50th Anniversary of the Automobile and to publicize the International Automobile and Motorcycle Show in Berlin.

The stamps were first placed on sale on February 15 at the Automobile and Motorcycle Show, and then they were made available for sale at all German post offices on the following day. 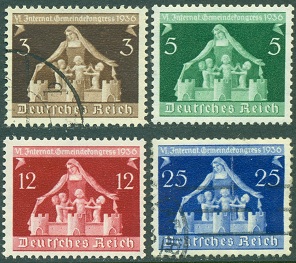 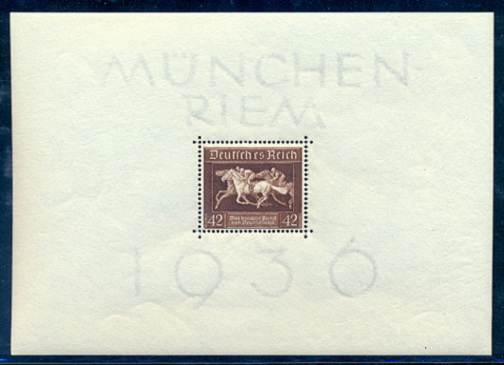 The two stamps shown above, at the left (Mi. #622-23, Sc. #477-78), were issued on June 30, 1936 to publicize the World Congress for Vacation and Recreation in Hamburg. The stamps depict an allegorical representation of "recreation".

The set of nine semi-postal stamps, shown above (Mi. #634-42, Sc. #B93-01), was issued during September and October 1936 to publicize Modern Architecture in the Third Reich. The surtax was for Winter Relief charities.

By denomination, from lowest to highest, they depict Frontier Highway - Munich, Ministry of Aviation, Nuremburg Memorial, Bridge over the Saale in Saxony, Germany Hall in Berlin, German Alpine Highway, Fuhrer House in Munich, Bridge over the Mangfall, and the Museum of German Art in Munich.