For the Third Reich, 1935 was a good year. In January, the inhabitants of the Saar Territory voted overwhelmingly to join the German state. Philatelically, there was a world-class philatelic exhibition, tributes to German railroads and great German musicians, and important Nazi Party events. The German commemorative stamp issues of 1935 follow.

The four stamps shown above (Mi. #565-68, Sc. #448-51) were issued on January 16, 1935, a few days after the end of the Saar Plebiscite, to celebrate the Return of the Saar to Germany. The Saar, an important coal mining region of Western Germany, had been mandated to France by the Treaty of Versailles, following World War I.

The stamps feature an allegorical depiction of "Saar (a child) returning to the arms of Mother Germany".

The set was first placed on sale on June 21, in Leipzig, at the Bach Fair. The stamps were then placed on sale at the OSTROPA Philatelic Exhibition on June 23. After June 24, they were available for sale at all Third Reich post offices.

Even today, the primary mode of travel between European towns is by railroad.

The Feldhernhalle or "Field Marshal's Hall" was commissioned by King Ludwig I of Bavaria in 1841, as a memorial to the Bavarian Army.  The center of the monument contains an 1882 sculpture representing the German victory in the Franco-Prussian War and the subsequent Unification of Germany. 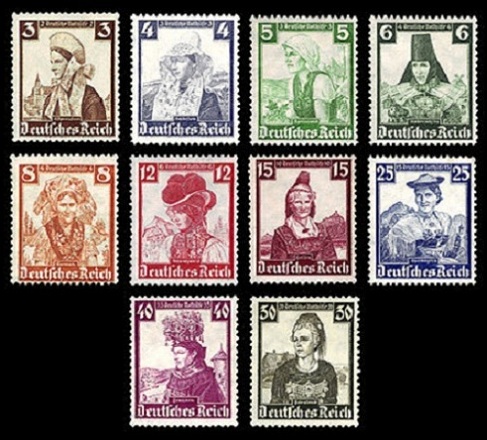 The theme of these stamps is "German Regional Costumes", and, by denomination, from lowest to highest, they depict women in regional modes of dress for -- East Prussia, Silesia, Rhineland, Lower Saxony, Brandenburg, Black Forest, Hesse, Upper Bavaria, Friesland, and Franconia. 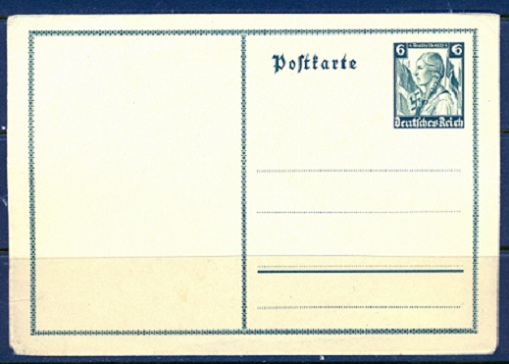 Shown above is the 1935 postal card issued for "Nothilfe". It is the same design type of the Nothilfe postage stamps and depicts a German girl with flags behind her.