In 1934, the new German Third Reich began issuing commemorative themed stamps in earnest. Even back in the early 20th Century, the stamps of Germany were very popular with collectors Worldwide, and orders for them came from almost every country on the planet. The Nazi's quickly learned of the propaganda value of their postage stamps, not only to show the wonders of their country, but also to spread their political, social, and cultural views. The Third Reich utilized this medium to its fullest extent, throughout the remaining years of the regime.

The design attributes are as follows.

The two stamps, above right (Mi. #544-45, Sc. #444-45), depict hands holding Saar, symbolizing that "Saar Belongs to Germany" and the German eagle holding a swastika. The set was issued on August 26, 1934 to publicize the upcoming Saar Plebiscite.

Think there was a little psychological persuasion going on here? 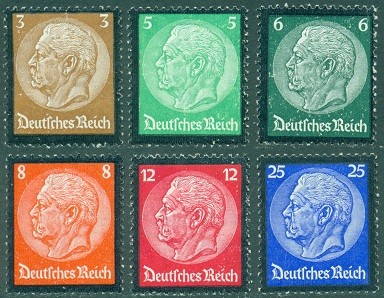 President Paul von Hindenburg (1847-1934) died in August 1934, and the last traces of the old Weimar Republic quickly faded away.

These six stamps of the Hindenburg definitive stamp series were overprinted in black, between the stamp designs, being a traditional sign of mourning. 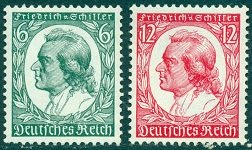 Friedrich von Schiller was a poet, philosopher, playwright, and historian. Working in Weimar, he often collaborated with his friend, the poet Johann Wolfgang von Goethe. This period is referred to as the "Weimar Classicism".

The nine Third Reich semi-postal stamps, shown above, were issued on November 5, 1934 for "Nothilfe". The surtax amount on the stamps went to charitable organizations.

The theme of these nine Third Reich stamps is "German occupations", and, by denomination, from lowest to highest, they depict -- a businessman, blacksmith, mason, miner, architect, farmer, chemist, sculptor, and judge.