Looking for an album for Switzerland stamps.

Starting out collecting the stamps of Switzerland, the best bet for you would probably be the Scott Switzerland Specialty album. The complete kit, including binder, pages, and slipcase is around $209.00. I found a couple internet retailers with them, and their links are below.

If you get the one from Amos Advantage, Scott’s main distributor, and you register as a member of their site, it is even cheaper. Both of these sites are major retailers and have been in business for decades.

With the Scott albums, there are no mounts on the pages, so you will have to buy your own mounts / hinges for mounting your stamps. Most Swiss stamps will, discounting souvenir sheets, fit into Showgard sizes 24, 25, and 27, so there aren’t that many different sizes of mounts to buy. The Scott albums are fully illustrated and contain spaces for all the major varieties of Switzerland stamps that are listed in the Scott Standard Postage Stamp Catalogue.

Buying blank pages for the album, for specialized material, is much cheaper with Scott Specialty album pages, and they are also available from the retailers above. You can probably get your mounts there, as well. A package of regular sized Showgard mounts is enough to mount about 100 stamps.

Starting out, the American and European made hingeless (with mounts) albums are hundreds of dollars more. With Lindner, Lighthouse, Schaubeck, etc. you have to buy all the page groups, at least three binders, and slipcases separately.

If you want a used album, I noted some Switzerland collections out on eBay in the last couple days, that come with different parts of the Lighthouse album set.

I have acquired a 2 Rappen grey (1862) which appears to have a yellow thread, and I wondered if this was unusual.

There was only one printing of the 2 Rappen imperforate Switzerland stamps of the Seated Helvetia design in July 1862, and like the other “G” Series issues, blue green silk threads were used for them. One with a yellow thread is probably a color-changeling, due to environmental effects and fading. According to Brach, white threads have also been seen on some of the issues.

The Strubels can be very confusing. I’ve read several books in both German and in English, and as many of the experts have differing theses about how these were produced, I found them even more confusing. I haven’t worked on my own Strubels in a long time, but I have mine arranged by Brach. His book has a more logical presentation, the varieties are easier to follow, and it is in English!

I am attaching scans of the 5r stamp I was referring to, both front and back. Unfortunately, margins let it down badly, and I picked it up for very little, thinking it was a 22G in all probability. However the cancel is an early type and the paper is very thin. I would describe the colour as a very deep yellowish brown, but nothing in Gibbons comes close.

I have taken the liberty of attaching a scan of a second stamp which I thought initially was a 24A given the thin paper. However, the vibrant colour leads me to believe it is not, given you describe the colours of the Munich prints as dull. Any ideas? 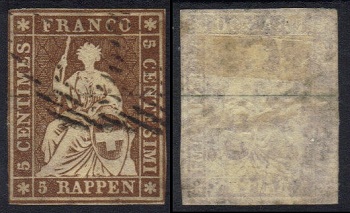 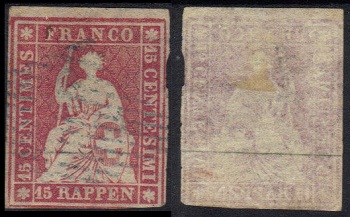 The 1856 – 1858 thin paper varieties of the 5 Rappen (22F) are actually later thin paper printings from the 1854 First Bern Printing (22B) plates, though the colors used are different and the embossing is not quite as heavy. As with the “B” group Switzerland stamps, these thin paper varieties have emerald green threads, as opposed to the bluish green threads of the “G” group Switzerland stamps. The paper on the back of your 5 Rappen stamp is uneven looking, like a thin paper variety, but the thickness would have to be expertly measured, to be sure. The paper should be translucent and between 0.06 and 0.07 mm thick.

The color bothers me a bit though. The color looks dark brown, more common to the “G” group. The stamp has very nice shading, but not the usual smudginess associated with printings of the “G” group. The First Bern Printings and the other colored thread printings tend to range from a light / medium brown to a yellowish brown. The common color of the Fourth Bern Printing (“G” group) is generally dark brown. According to Brach, the 22F stamp normally comes in shades from pale brown to pale grayish brown. This stamp has thick, solid frame lines, common to the “G” group, instead of the thinner, sometimes broken, frame lines of the “B” group and “F” group. I would be cautious about calling this a 22F. The thin paper printings, without some kind of certification, are generally not taken very seriously.

I was reading your article about the Standing Helvetias as I have a collection of them. You have increased my knowlege greatly and I thank you. There is one small problem, however, and perhaps I'm just reading it wrong. You refer to the number of perforations there are in a given perforation size (11 3/4 is 14 vertical perforations). Yet, I see. by counting the "teeth" or perf tips in your examples, that you must be referring to those. The perforations are the holes while the teeth or tips are the part that sticks out on either side of the perforation. This is a small matter but it may be confusing to some and, as I said, I may just be reading the article wrong.

Thanks for a great article. I has cleared up some of the mystery in identifying these Switzerland stamps. Now, if only there were a simple way  of identifying those #@&%**# control marks, type I and II.

Ah .... more catalog confusion.  Actually, you brought to light something I had never actually calculated, outside of the descriptions in the Zumstein catalogs, which I used in formatting the text for my web pages.  I have a perforation gauge that measures 1/4 perforations, so I’ve never actually messed around much with counting the perforations, like I must do with my early German Empire collection.  As is the case with early Germany, Michel / Scott refer to perforation holes (Zahnungslocher) on each side of the stamp.  In checking the Zumstein catalog this morning, I see that Zumstein is referring to the number of perforation points (Zahne) on the sides of the stamps.  I am attaching a scan of the reference page for the Standing Helvetia Switzerland stamps from the Zumstein catalog for you to look at.  Due to copyright considerations, I can not put it on my website.

Don’t feel bad about being confused by the cross-in-oval control markings on Switzerland stamps.  Everyone that specializes in the Standing Helvetias and the accompanying numeral issues of the same period is confused by these markings, including myself.  Many of the markings are very light impressed in the paper, causing them to be barely noticeable, even in fluid.  To make matters worse, more-often-than-not, the black circular date stamp is usually positioned right on top of the control mark, making it even harder to see.  Separated by perforation gauges, all the stamps from Zumstein groups “A – C” have the wide oval and thick cross in the marking, and all the stamps from Zumstein groups “D – F” have the narrow oval and thin cross in the marking.  The problem is with groups “C and D”, which both have the same perforation gauge.  Zumstein actually gives the precise measurements for these markings .... useful only if you’re using a microscope to examine each of your stamps!!  On well struck control marks, I prefer the naked-eye method .... On the first control mark, the oval is visibly wider; the cross is squat looking and the arms look very thick; the double lines of the oval are usually well defined and clear.  On the second control mark, the oval is visibly narrower; the cross appears taller, as well as thinner; and the double oval lines are less discernible.  As a rule-of-thumb, I never attribute one of my stamps as Zumstein group “C”, unless I am absolutely positive about the control marking type!  Unattributable ones usually go into my stock book, or sometimes I’ll sell them on eBay by the Scott numbers, as Scott doesn’t list the group “C” varieties for this perforation gauge.

If buying any of the pricier varieties of these Standing Helvetia Switzerland stamps, I would strongly recommend buying them from European dealers that are specialists in this area, and buying only stamps with recognized authentication markings or certificates .... I have.  Many American dealers miss-attribute these particular Switzerland stamps.  It’s better to pay a little extra to acquire a good quality, properly attributed stamp.  The group “C” stamps aren’t unreasonably expensive, except for the 3 Fr. denomination, which is unobtainable.