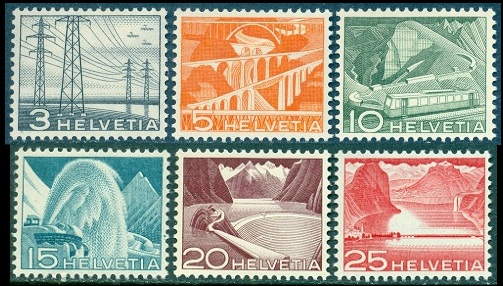 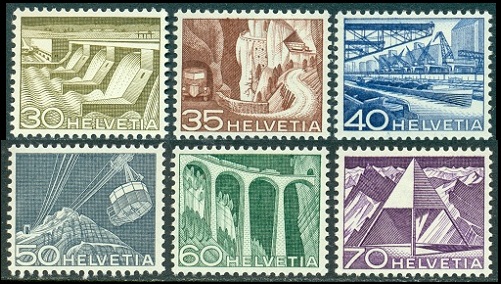 The originally issued designs of this beautifully engraved set of stamps are as follows:

All of the denominations were issued in sheets of 50 stamps, but they were primarily intended for dispensation in vending machines.

The 5 C., 10 C., and 20 C. denominations were each issued in booklets containing 10 panes of 8 stamps. Complete booklets are very expensive. As these Swiss stamps were printed in a special sheet format (nine vertical rows) for use in creating booklet panes, they all exist in tête-bêche and inter-space pairs.

The 5 C., 10 C., 20 C. (Type III), and 40 C. denominations were also issued in coils. With the exception of the 20 C., which was of a different type, the only way to tell these apart from the sheet stamps is by having examples with a control number on the back of the stamp. In the coil rolls, the back of every fifth stamp had a control number printed on it. These control numbers were printed on top of the gum, so there is no way to tell used coil stamps, that have been soaked off envelopes, apart from the sheet stamps. Most of the mint condition control number examples from this set are pretty expensive. 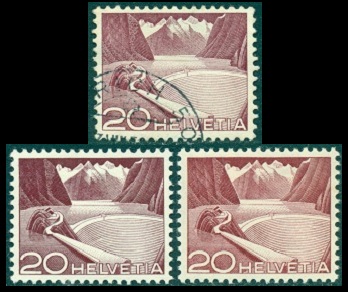 After the printing of the 20 C. denomination Swiss stamps had commenced, it was discovered that the original die had been too lightly engraved, which caused printing difficulties and loss of the fine details.  The original die was then re-engraved to strengthen the design. The re-engraving caused a couple small differences in the printed stamps, which went unnoticed at the time. This re-engraving (the so-called type II) was completed before the new stamps were issued, and it was these Type II stamps that were actually issued on August 1, 1949.

It is estimated that about 900,000 stamps of the first printing (Type I) were produced, before printing was stopped and the die was re-engraved. Because they were considered common definitive stamps at the time, many were probably thrown away, so the survival rate of the Type I stamps is estimated to be less than 1% of the original volume issued or about 9,000 stamps! Today, a MINT NH example of the Type I stamp is about $4,000 and a USED example is about $70.

Conversely, it is estimated that around 1.5 billion stamps of the re-engraved printing (Type II) were produced.  The Type II stamps are very common, and they have minimal value. 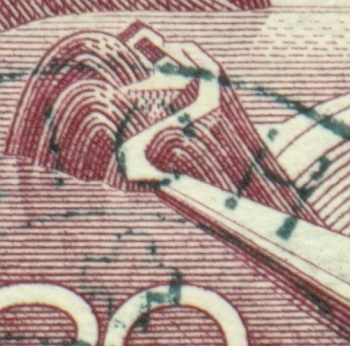 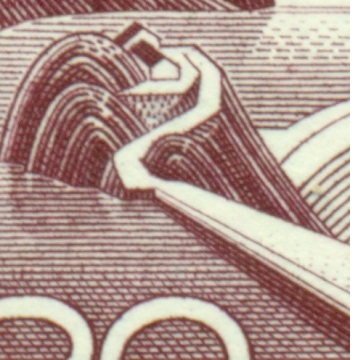 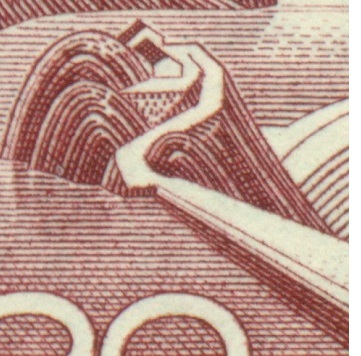