Beginning in 1914, a new series of high denomination definitive Swiss Stamps were issued, and they depict the three most cherished landmarks of Switzerland and the Swiss people.

All of these stamps were printed on white paper, of excellent quality, that was watermarked with multiple Swiss Crosses. The watermark impressions are very strong on these issues, and one must be careful when examining them. What may appear to be a dark spot in the paper, revealing a "thin" spot, may NOT ACTUALLY BE A THIN SPOT, but THE SHADED AREA OF ONE OF THE WATERMARK IMPRESSIONS. Frequently these watermark impressions can be clearly seen through the front of the paper and the stamp design, as is evident on some of the mint examples from my collection that are used on this page. 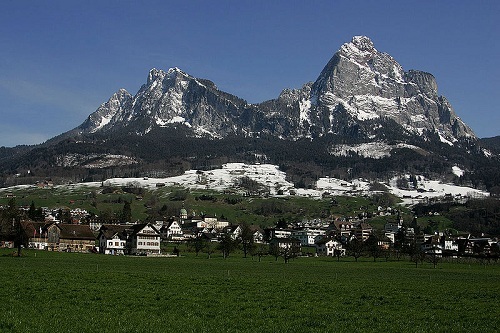 The Mythen in Schwyz
From Wikimedia by Roland Zumbühl

"Die Mythen" are a group of three mountains in the center of the Schwyz Canton of Central Switzerland. The town of Schwyz, which is the capitol of the canton, is located in a valley below Die Mythen. The larger two of the peaks are know as "Grosser Mythen" (6,230 ft.) and "Kleiner Mythen" (5,942 ft.). The name "Mythen" was originally taken from the Latin word "meta" (feminine case) meaning "soaring".

The mountains are said to have been created millions of years ago, by a "thrust fault", when the Alps were first being formed. This is evident in the fact that these three peaks have the visual effect of seeming to jut straight up in the air out of an otherwise "flat" landscape.

Schwyz is one of the founding cantons of Switzerland, and the Swiss flag is based on the coat of arms of Schwyz. On August 1, 1291, Schwyz, along with the cantons of Uri and Unterwalden, all bordering Lake Lucerne, signed a charter, joining together to form the Swiss Confederation. The 1291 Charter is located in the Federal Archives in Schwyz today. Schwyz took the lead in the new confederation, and the new country took its name as "Schweiz", the German language name of Switzerland.

An interesting bit of symbolism is going on at the sides of the 3 Fr. stamp design. At the sides of these 3 Fr. Swiss stamps are fasces, but these symbols of the magistrates of Roman Imperial times do not have an axe-head at the top. Earlier, during the Roman Republic, the blade was always removed when the fasces were being carried inside of a city. This act symbolized the rights of citizens against arbitrary state power!


During their four years of use, the blue green stamps were widely used but few mint copies must have been saved. Used examples are relatively affordable, but the mint stamps are scarce and very expensive.

The carmine 3 Fr. Swiss stamps continued in use until 1928, when they were replaced by new 3 Fr. stamps of a similar design. Mint and used examples of the carmine stamps are common and easily affordable. 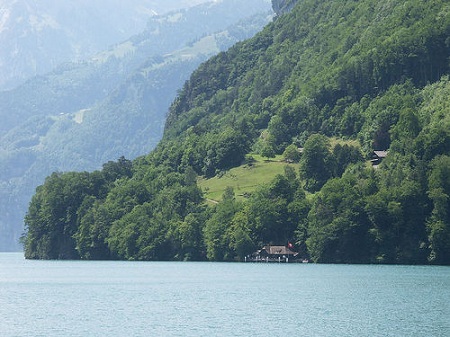 The Rütli is a mountain meadow on Lake Lucerne in the Swiss canton of Uri. It was here that the legendary oath was taken by the cantonal leaders of Schwyz, Uri, and Unterwalden to affirm the Old Swiss Confederacy.

The "Oath on the Rütli" is believed to have happened in November 1307, though the year was moved to 1291 in the 1940's, so it would coincide with the anniversary of the National Charter.

The Oath on the Rütli is now celebrated as part of Swiss National Day on August 1. Every year, festivities take place at the Rütli, where the oath is re-enacted and important dignitaries give speeches.

According to the catalogs, this stamp supposedly depicts "The Rütli (Meadow)", as is shown in the photograph in the last section. I would dare anyone to try and find that meadow, which in the view on this stamp, would be on the mountainside on the other side of the lake. It's not there. Anyway, this one is called "The Rütli". 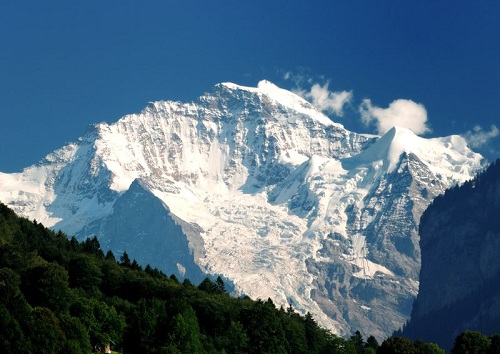 The Jungfrau (13,642 ft.)
From Wikimedia by Earth Explorer

The highest denomination of the new pictorial Swiss Stamps, the 10 Fr. (violet), is shown above at the left (Zu. #131, Mi. #123, Sc. #184). The design features a panoramic view of the Jungfrau (mountain). Just in case the viewer doesn't know the name of the mountain, the designers also added a Swiss maiden (jungfrau) at the left side of the design. Her right hand holds a sword, and her left hand rests on a shield, emblazoned with the Swiss coat of arms -- the usual female representation of "Helvetia".


The scarcity of the two 10 Fr. Swiss stamps is the opposite of the two 3 Fr. Swiss stamps, described at the beginning of this page. The violet 10 Fr. stamp is the more affordable one, and the green 10 Fr. stamp is the scarcer and pricier one. The violet stamp was in use for 16 years, whereas the green stamp was only in use about 8 years, before it was replaced.

Another thing to consider ... In 1930, the World was in the grip of the Great Depression. 10 Swiss Francs was a LOT of money to most people. This would be equivalent to about a $5.00 U.S. stamp of the time. In the Swiss currency, 10 Francs was a "gold" coin. These were printed in sheets of 25 stamps, which would have been a 250 Swiss Francs cost to a collector or dealer at the time. During the Great Depression, this would have been a SUBSTANTIAL FORTUNE, so it is not hard to rationalize why both the mint and used green 10 Fr. stamps would be so scarce and expensive today.

In 1928, the 5 Fr. pictorial definitive Swiss stamps were completely re-engraved, as shown in the image above (Zu. #178, Mi. #227, Sc. #206). These new re-engraved stamps were printed in blue, and the vignettes are much nicer looking than those of the somewhat smudgy looking dark ultramarine stamps of the 1914 issue.

On the re-engraved stamps, the picture and frame are much lighter and "HELVETIA" is in smaller letters. The designer's name, under the lower frame line on the right, is also different from the name on the 1914 issue.


In 1938, the 3 Fr., 5 Fr., and 10 Fr. Swiss stamps, issued between 1914 and 1931, were replaced by a new modernistic looking series of high denomination definitive stamps that featured patriotic themes.