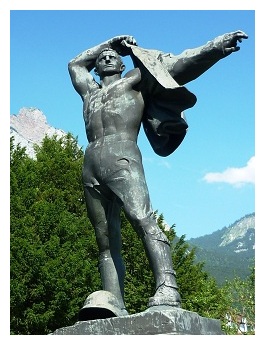 The statue (detail) shown in the image at the left is "Sculpture of a Man" by Hans Brandenberger. The statue allegorizes readiness for defense, and it was originally shown at the 1939 National Exhibition. In 1941, the statue was moved to the courtyard of the Federal Archives, to mark the 650th year jubilee of the Swiss Confederation. 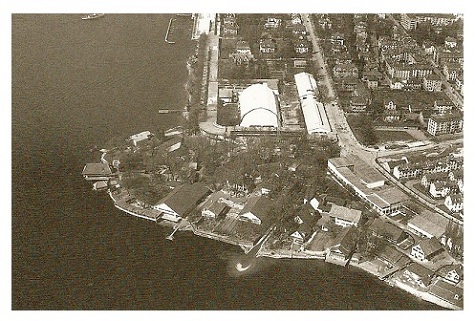 From the middle of the 19th Century, National Exhibitions were held in Switzerland, every few years, as trade and industrial fairs to showcase Swiss arts, architecture, and the latest commercial products. The 1939 National Exhibition, was different though.

With the rise of the Nazi government in Germany in the 1930's, Switzerland had already taken measures to demonstrate its national independence to its German and Italian neighbors. From 1934 to 1936, a museum to house the 1291 Federal Charter was built. In 1937, monuments to the exploits of the legendary hero of Swiss nationalism and independence, William Tell, were restored. These actions were designed to demonstrate the resolve of Switzerland to defend its freedom and independence.

By 1939, with the annexations of Czechoslovakia and Austria by the Third Reich, Switzerland was the only independent, predominately German speaking country remaining in Europe. The Swiss knew that the trans-Alpine transportation routes through their country would be a prime target, in the event of a large scale war in Europe. They had faced much larger foes in their long history, but they were unsure of how they would fare in a struggle utilizing modern weapons of war. In fact, there is evidence that Germany was developing secret plans for the invasion of Switzerland at that time.

The threat of Nazism added a new dimension to the 1939 National Exhibition. The "Landi 1939", held from May 6 through October 29, is now remembered as an expression of "spiritual national defense". The themes of the exhibition, "homeland and people", "our raw materials", "processing and sales", "distribution", and "culture of the spirit and the body" showed the balance between an economic industrial fair and a national self-statement. There was also a pavilion featuring the Swiss Army, and the Swiss Army was actually mobilized, a month before the end of the exhibition, when Germany invaded Poland on September 1, 1939.

The exhibition was an overwhelming success. 10.5 million visitors paid admission and attended the exhibition. Considering Switzerland only had a population of 4.2 million at the time, the public support was truly incredible. The exhibition became more of a pilgrimage for patriotic-minded Swiss, rather than a commercial event.

Along with Switzerland's pledge of neutrality, with respect to ALL combatants, the National Exhibition worked. Nazi Germany did not invade Switzerland, and Switzerland continued to be an independent nation, throughout World War II.

Issued to reflect the theme of the upcoming National Exposition, the stamps depict:

The French language 20 C. stamp also exists imperforate, and it is very rare.

The twelve Swiss stamps shown in the three images above (Zu. #228z-39, Mi. #344z-55, Sc. #256a-67) were also printed in each of the three languages of the Swiss Confederation, those being German, French, and Italian. They were all issued on May 6, 1939, the opening day of the National Exhibition.

All of the stamps are printed in photogravure, in sheets of 50, and they are all perforated 11 3/4. The design features a crossbow and a branch with apple blossoms. They symbolize the idea that Swiss quality (the crossbow) will produce a flowering of Swiss industry and commerce (the branch).

On the German language 10 C. Swiss stamps, both the sheet stamps and the coil stamps were printed on paper with grilled gum.

With the exception of the 10 C. German language stamp, which was described in the previous section, all of the Swiss stamps issued in coils are printed on paper with regular gum, and they do not show any "grill-like" impressions on their back sides. 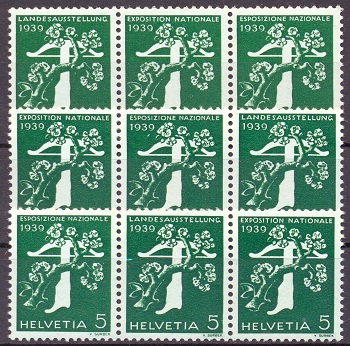 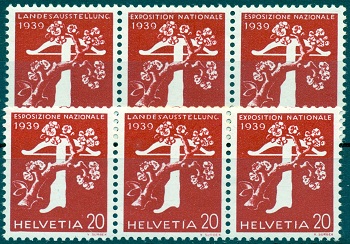 Mint coil strips of three are shown in the four scans above.

There are different se-tenant combination possibilities in each strip, as well, which leads to another specialization possibility. As shown above ... The 5 C. coil strips show three different combinations, with the first stamp in each strip being the German, French, and Italian language stamps. The two 20 C. coil strips show the German and Italian language stamps being the first stamp in each strip.

The last image above, shows the control number on the back of the stamps. These numbered stamps are much scarcer than the regular coil stamps, and they must be collected in fresh, mint condition, as the control numbers are printed ON TOP of the gum. As a result, stamps that are used and soaked off paper are not collectible with control numbers.

For further information on the collectible varieties of these coil stamps, please see the Zumstein or Michel specialized catalogs for Switzerland.

There is also an extensive series of postal cards and letter sheets, utilizing the 10 C. and 20 C. designs of this issue. They were issued in each of the three national languages and had varying pictorial designs, being printed in either gray brown or lilac brown. There were 37 different pictorial illustrations used for the postal cards, and 18 different illustrations used for the letter sheets.

In order to publicize the 1939 National Exhibition, and to send a message to their German and Italian neighbors that they would not be intimidated into submission or subordination, Swissair flew three special round-trip flights from Zurich. These flights were known as the EUROPAFLUG.

The first one, known as EUROPAFLUG / SUD, flew from Zurich, on April 29, 1939, to Rome, Athens, Cairo, Sofia, Bucharest, Belgrade, Budapest, and returned to Zurich on May 6, 1939, the opening day of the National Exhibition. 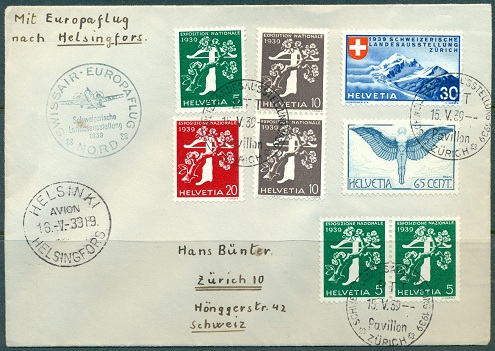 The SWISSAIR - EUROPAFLUG - NORD cover, shown above, is franked with Swiss stamps from the two 1939 National Exhibition issues. The stamps are canceled with the Exposition Pavilion postmark. At the left are the EUROPAFLUG postmark and a HELSINKI receiving postmark. 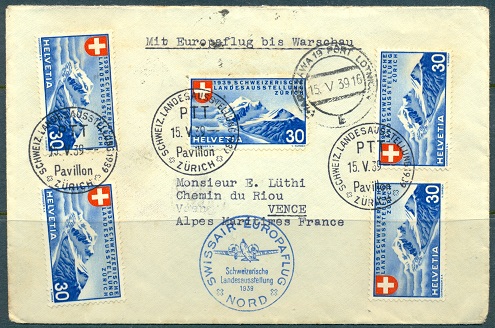 The SWISSAIR - EUROPAFLUG - NORD cover, shown above, is franked with a rather unique arrangement of 30 C. Swiss stamps from the first 1939 National Exhibition issue. The stamps are canceled with the Exposition Pavilion postmark. At the bottom is the EUROPAFLUG postmark and at the top right is a WARSAW receiving postmark.

In a short period of about 3 months, after this cover was postmarked in Warsaw, the Republic of Poland would cease to exist! 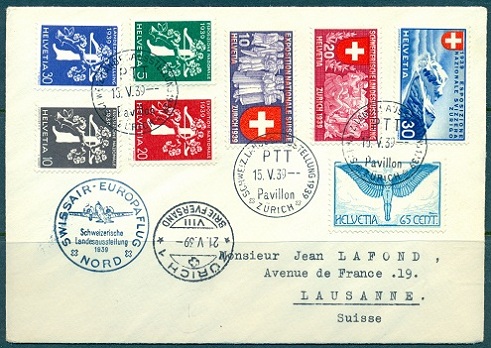 The SWISSAIR - EUROPAFLUG - NORD cover, shown above, is franked with Swiss stamps from the two 1939 National Exhibition issues. The stamps are canceled with the Exposition Pavilion postmark. This is a round-trip cover and it is canceled with a ZURICH receiving postmark, marking the termination of the trip. 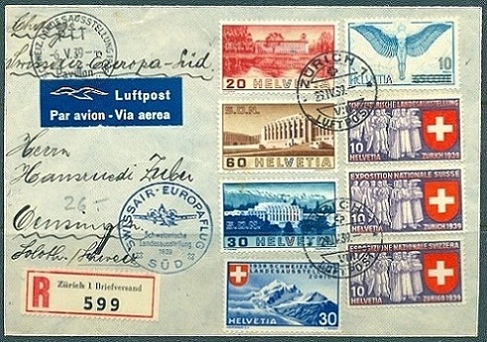 The SWISSAIR - EUROPAFLUG - SUD cover, shown above, is franked with Swiss stamps from contemporary issues and from the first 1939 National Exhibition issue. The stamps are canceled with ZURICH airpost postmarks and with the Exhibition Pavilion postmark at the upper left. At the left is the EUROPAFLUG postmark. The cover is addressed to OENSINGEN, Switzerland, and there is a May 8, 1939 OENGINGEN receiving postmark on the back. 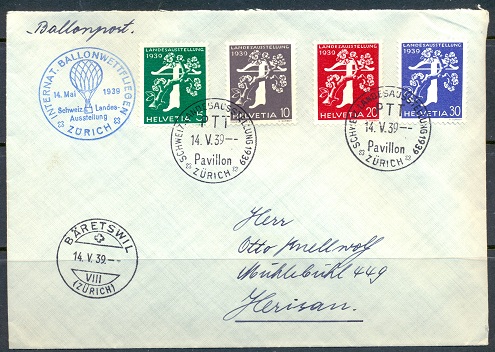 A Balloon race was held at the exhibition on May 14, 1939. One of the flight covers from that event is shown above.