Commemorative Swiss stamps of 1946 to 1953 highlight achievements in transportation and communications.

When one considers that all the stamps on this page were issued over a period of eight years, it is instantly obvious that Switzerland does not issue very many commemorative postage stamps each year!  This is much appreciated by Switzerland stamp collectors, considering the overwhelming volumes of commemorative stamps issued every year by other European countries.  This practice also makes the collecting of modern Swiss stamps easier and more affordable than those of neighboring European countries! 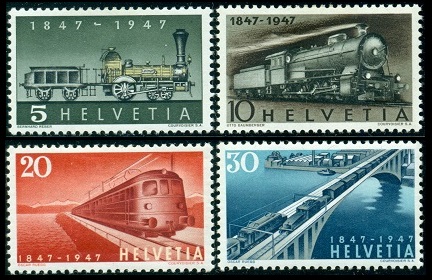 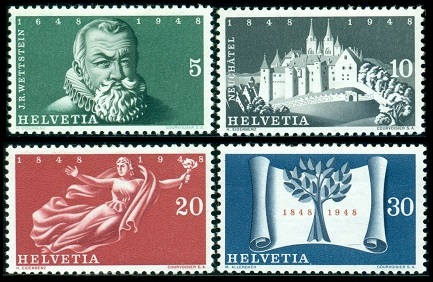 Johann Rudolf Wettstein (1594-1666) was a Swiss statesman and one-time mayor of Basel.  He achieved fame through his diplomatic skills, culminating in Swiss independence from the Holy Roman (Hapsburg) Empire in 1648.

The Neuchâtel Revolution.   Following the fall of Napoleon I and the Congress of Vienna in 1815, the Principality of Neuchâtel was awarded to the Prussian Empire.  The Prussian Empire later allowed the principality to join the Swiss Confederation, then not yet an integrated federation, but a confederacy, as a full member.  Thus, Neuchâtel became the first and only monarchy to join the otherwise Republican Swiss Cantons.  The "peaceful" Neuchâtel Revolution of 1848 established the principality as a republic.   In the same year, the modern Swiss Confederation was transformed into a federation, with Neuchâtel as a member Canton. 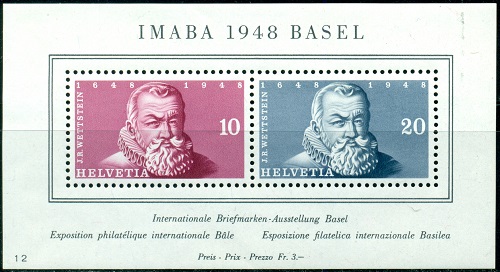 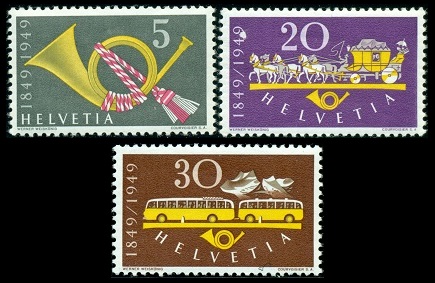 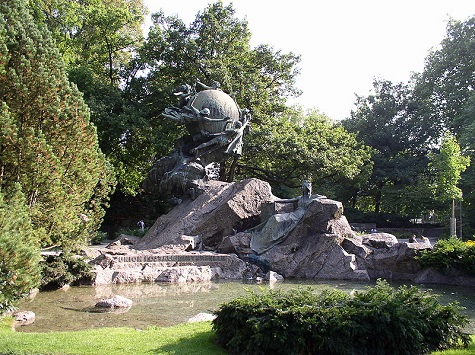 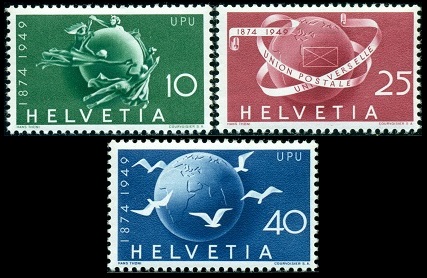 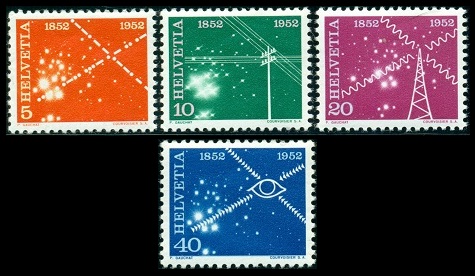 Return to Switzerland Stamps from
Swiss Stamps - Commemoratives of 1946-1953

Johann Heinrich Pestalozzi (1746-1827) was a Swiss educational reformer.  He founded several educational institutions in both the German-speaking and French-speaking regions of Switzerland, and he wrote many works explaining his principles of education.  Thanks to his work, illiteracy in 18th Century Switzerland was almost completely eradicated by 1830.

The design features a view of the Zurich Airport and the tail of a Swissair plane. 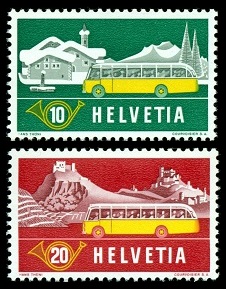 The two designs depict a Postal Bus with a Winter background and with a Summer background.  These stamps were only sold on the Postal Buses.

The buses provide mail processing services and passenger travel to remote villages that are not easily accessible by railway.