Commemorative Swiss stamps of 1941 to 1945 highlight important national programs and events, with this wartime period ending in the issue of a magnificent set of stamps celebrating the end of World War II.

Switzerland may have been politically neutral during World War II, but one must remember that it was completely surrounded by Axis nations or Axis-occupied nations.  This situation created many shortages of food and consumer products, causing rationing and making things difficult for both the Swiss government and the Swiss people. 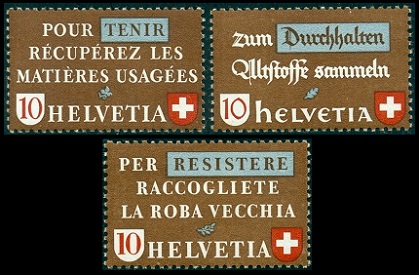 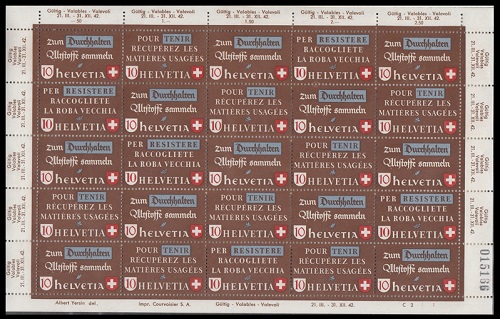 The three designs feature Apollo and the Olympic Rings.

These stamps were printed on two different types of paper, and there are many plate faults on all the denominations.  See the specialized catalogs for details.

The 1944 World Olympics were to have been held in London, but they were canceled, due to World War II.  In spite of the war, the International Olympic Committee, with its headquarters in Lausanne, Switzerland, organized events to celebrate the 50th Anniversary of its founding.  Held from June 17 to June 19, 1944, these events were known as "The Jubilee Celebrations". 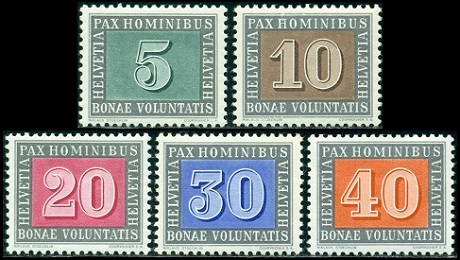 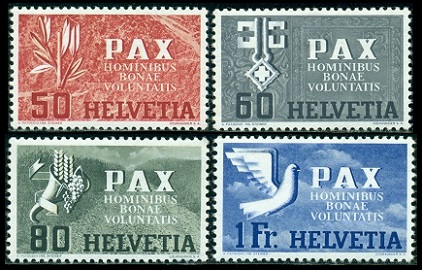 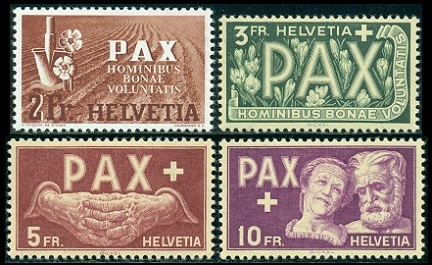 With the exception of the two highest denominations, these stamps are all inscribed "PEACE AND GOODWILL TO ALL MEN" in Latin.

Other than the inscriptions, the designs of the stamps are as follows:

Used examples of these stamps are worth much more than the mint condition examples.  The prices in the catalogs are for commercially used stamps.  Favor-canceled stamps, which are abundant, are worth about the same as the mint, lightly hinged, stamps.

Return to Switzerland Stamps from
Swiss Stamps - Commemoratives of 1941-1945

The design features a farmer plowing.

With Switzerland not being able to import agricultural products during the war, the wartime food supply became a problem.

The goal of this agricultural development plan was to convert all arable land to agricultural production.  This included plowing under dairy farms, public parks, sporting facilities, and excess industrial land.  The plan, enacted between 1941 and 1945, was very successful, doubling Switzerland's agricultural capacity, however, food rationing still took place in Switzerland, throughout World War II.

The design features masons, a knight, and the Bern Coat of Arms.