The overprinted and re-valued Air Mail stamp shown above was issued on May 22, 1938 to promote the Pro Aero Campaign, held throughout Switzerland from May 21 through May 22, 1938.  These Swiss stamps (Zu. F #26, Mi. #325, Sc. #C26) were printed in miniature panes of twenty-five, which were available with favor-cancellations applied to them.

On May 22, special Air Mail flights were made to thirteen Swiss cities, with the letters being franked by the stamp shown above.  The proceeds from the sale of the stamps were SFr. 139,083.  Combined with other donations, the total contributions for the two day campaign netted the foundation SFr. 632,000, a very large sum of money in 1938.

Unused stamps were not sold to the public in the usual manner.  They were affixed to Air Mail letters by the postal clerks, when the stamps were purchased at the post office.  Mint condition examples, however, DO EXIST in the philatelic marketplace, but they are tremendously rare, with a mint, never hinged example being about $15,000.

Quite a few of the so-called "mint" examples offered are actually "un-canceled" examples that have been soaked off of flight covers, with a "flown cover" being valued at only about $15. 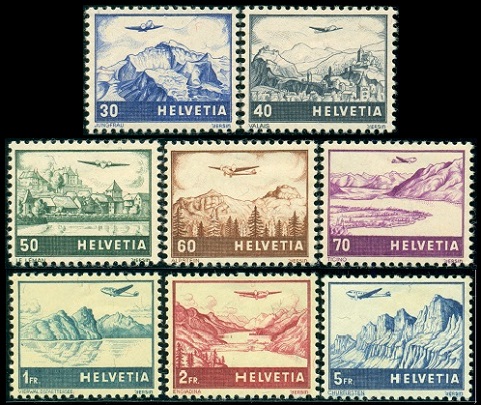 The designs of these Swiss stamps feature planes flying over various Swiss landscapes, as follows:

These stamps were on sale between May 12 and May 28, but they were only valid for mail carried on the Buochs to Payeme round-trip flight on May 28, 1941.

These stamps were on sale between July 1 and July 13, but they were only valid for mail carried on a special round-trip flight from Bern to Zurich on July 13, 1943. 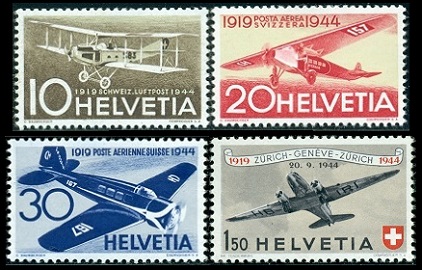 These Swiss stamps were on sale from March 17 through May 17, 1947, but they were only valid for postage on letters carried on the May 2, 1947 round trip flight from Geneva to New York City.

These stamps were on sale between May 1 and May 15, but they were only valid for mail carried on special flights to Lausanne, Lucerne, and Locarno on May 22 and May 23, 1946.

These stamps were on sale between April 11 and April 27, but they were only valid for mail carried on special flights to Chaux-de-Fonds, St. Gallen, and Lugano on April 27 and April 28, 1949.

These stamps were on sale between June 1 and July 13, but they were only valid for postage on letters carried on special Pro Aero anniversary flights to Bern, Locarno, and Langenbruck on July 13, 1963. 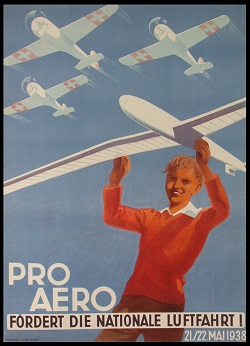 Many of the Swiss Air Mail stamps issued after 1938 are inscribed "PRO AERO", and they were issued specifically for Pro Aero fundraising campaigns.

The Pro Aero Foundation of Switzerland was formed in May 1938, under the umbrella of the Swiss Aero Club.  The aim of the  foundation is to stimulate enthusiasm for aviation among public authorities and institutions and among young people.  Their motto is "A nation that does not fly will be left behind".

These stamps were valid for all types of mail.  Their use was obligatory on letters carried by special Pro Aero flights during May and June of 1972.

The surtax on these stamps benefited the Pro Aero Foundation and the Swiss Air Rescue Service.

The design features a Junkers JU-52 of 1939 flying past the Matterhorn.  These stamps were issued in miniature sheets of eight.