Commemorative Swiss stamps of 1932 to 1939 celebrated peacetime international events in Switzerland and the anniversary of a great engineering marvel.  This period also witnessed the appearance of the first Swiss souvenir sheets, celebrating important national philatelic exhibitions. 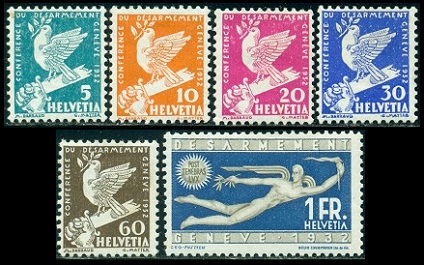 The Conference for the Reduction and Limitation of Armaments, also known as The World Disarmament Conference or The Geneva Disarmament Conference, first met in Geneva in February 1932, with additional meetings being held at intervals through 1937.  The conference was an effort by member states of the League of Nations to promote the policy of disarmament as a pathway to secure international borders and to World peace.

The conference was hindered by a number of disagreements, with the principle ones being what constituted defensive and offensive weapons and the polarization of France and Germany.  With their history of military conflicts with Germany, France insisted on having superior military capability to that of Germany, and the German state, heavily restricted by the Treaty of Versailles, felt that they should be able to have the same level of armaments as those of their neighbors.  Unfortunately, the conferences ended in deadlock.  In 1933, Adolf Hitler was elected as the new Chancellor of Germany, and afterwards, Germany withdrew from both the League of Nations and the disarmament conference. 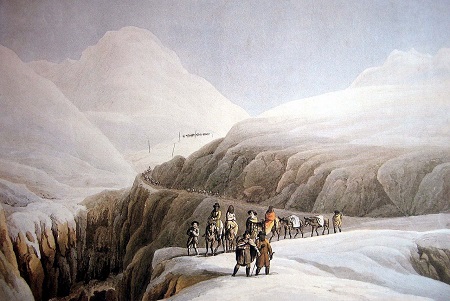 Painting of the Gotthard Pass during the Winter of 1790

By the middle of the 19th century, railroads had been constructed all over Europe, connecting cities and nations, and railroads were quickly becoming the principle method of economic trade.  Due to the impassible mountainous terrain of Southern Switzerland, many railroads were starting to circumnavigate the country.  Many Swiss political leaders feared that if something wasn't done to enable rail traffic to cross through Switzerland, the economic future of their nation would suffer greatly.  The solution was to "drive a hole through the Swiss Alps" that would enable rail traffic to cross through Switzerland!  Considering the technology of the time, this would be a daunting task!

The site chosen was the Gotthard Pass (Elevation 6,909 ft.).  There was a narrow road over the pass, but it was winding and treacherous, unsuitable for railway traffic.  In order to accommodate commercial railroad traffic between the business centers of Northern Switzerland and those in Italy, a railroad tunnel had to be driven through the pass, connecting the towns of Göschenen, in the Canton of Uri, on the North and Airolo, in the Canton of Ticino, on the South!

Construction on the 10 mile long St. Gotthard Railway Tunnel began in 1871 and was completed in 1881.  It was first used for passenger and commercial railroad traffic, beginning in 1882.  The new tunnel quickly became the shortest and quickest route for commercial railroad traveling between Germany and Italy, enabling Switzerland to eventually become the leading economic power of Europe. 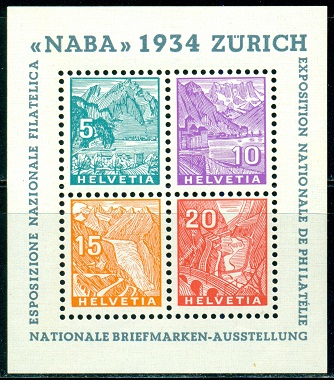 The 5 C., 10 C., 15 C., and 20 C. denomination Swiss stamps in this souvenir sheet are identical to the same denomination sheet-format stamps of the Landscape Series of definitive postage stamps issued earlier in 1934.  The margins of the souvenir sheet are inscribed "NABA" 1934 ZURICH at the top, with National Philatelic Exhibition being inscribed on the three remaining sides in French, German, and Italian.

The souvenir sheets were sold only at the exhibition for 1.50 Francs.  Though 50,000 of them were originally printed, the surviving souvenir sheets, today, are scarce and expensive. 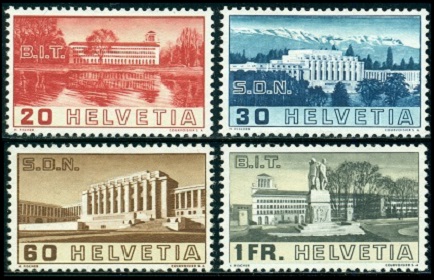 Albert Thomas (1878-1932), a former French Socialist parliamentarian, was the first Director General of the International Labor Bureau from 1919 until 1932. 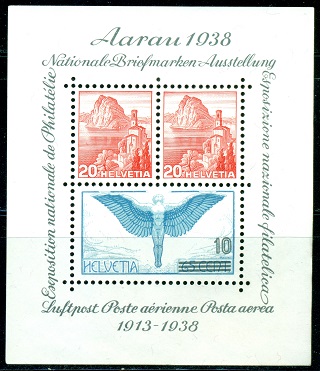 The souvenir sheets were sold at the exhibition for 1.50 Francs.  With over 200,000 of them having been originally printed, they are still fairly common and reasonably inexpensive.

Return to Switzerland Stamps from
Swiss Stamps - Commemoratives of 1932-1939 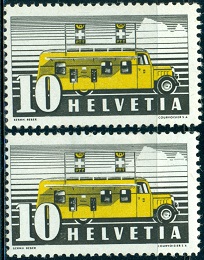 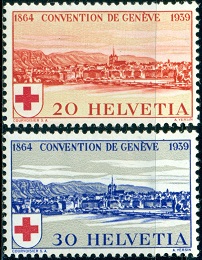 The two designs feature a view of Geneva.