The first commemorative Swiss stamps appeared in 1900, celebrating the anniversary of the Universal Postal Union (UPU).  Only three commemorative stamp sets were issued during the period from 1900 to 1924, but as far as philatelic complexity, two of these issues are real whoppers!

True, Switzerland has issued a LOT of definitive stamps for day-to-day usage on letter mail.  But as far as special stamp issues, Switzerland has always been very conservative, and they remain so to this day.  Generally, the annual postage stamp output of Switzerland consists of one Pro Juventute (charity) set, one Pro Patria (charity) set, and maybe a limited number of commemorative Swiss stamps.  This makes collecting the modern stamps of a country much more manageable, as opposed to some other countries' output of over a hundred issues every year, with most of them having never been seen or used by the general public in those countries. 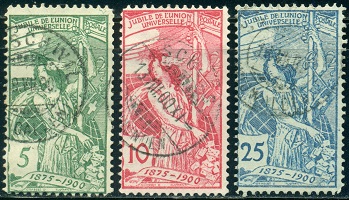 The three commemorative Swiss stamps shown above were issued on July 2, 1900 (Plate I) to celebrate the 25th Anniversary of the Universal Postal Union.

The three designs feature an allegorical representation of the Universal Postal Union.

Each denomination of this set was printed from three different plates, with the third plate being re-engraved.  Examples of ALL of them are shown above.

The issue dates for the stamps from each plate are shown below.  Their significance will be described later.  These UPU commemorative Swiss stamps were valid until December 31, 1900.

First, lets look at the plate impressions and the perforation methods used for Plate I and Plate II.

All of the impressions on the plate are 2.2 mm apart, and all the stamps from this plate were line perforated approximately 11 3/4 x 11 1/2.

All of the impressions on the plate are 2.8 mm apart, and all the stamps from this plate are harrow perforated 11 3/4.


Though there are some engraving differences between the stamps from these two plates, they can easily be told apart by the appearance of the perforations.

The so-called "re-engraved" stamps from Plate III are easy to identify.

All of the stamps from this plate are harrow perforated 11 3/4.  The impressions are usually a little bit clearer, especially in the background lines.

The catalog attributes for these stamps are as follows. 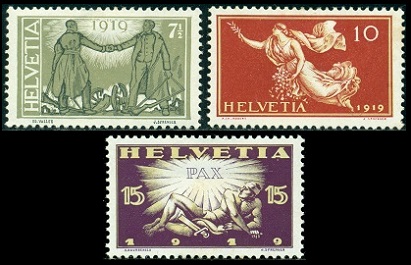 The three designs depict allegories of peace, as follows: 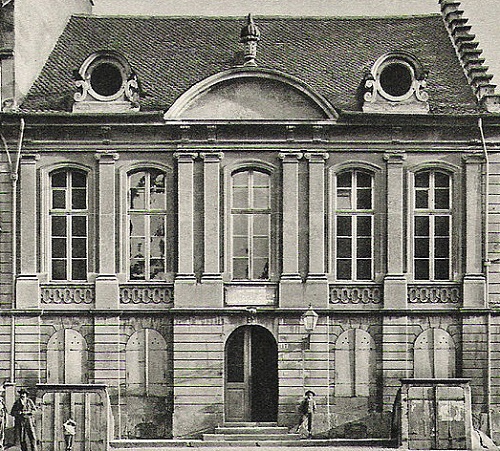 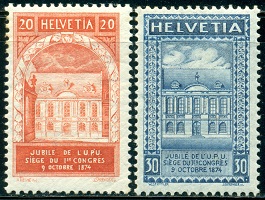 The designs feature the Rathaus zum Äusseren Stand, located in the Old Town section of Bern.  A Youth Parliament was established there in 1731.  From 1799 until 1847 the building was used by the Federal Assembly of the Helvetic State of Bern, and from then until 1900, it was used by the Bernese Circuit Court.  The building's Empire Hall was the venue for the signing of the first Bernese Constitution in 1831, the signing of the Constitution of the new Federation of Switzerland in 1848, and the creation of the Universal Postal Union in 1874.

It has been privately owned since the 1930's, and, very sadly, today, it is a restaurant called Restaurant zum Äusseren Stand.

This issue is not as simple as the image above would imply.  For these two Swiss stamps, two different perforation processes and three different colors of gum were used, creating 10 major collectible varieties, as listed in the Zumstein catalog.  For anyone that wishes to explore the varieties of this issue further, a PDF of the listing page in the Zumstein Schweiz Liechtenstein catalog is located HERE.

Return to Switzerland Stamps from
Swiss Stamps - Commemoratives of 1900-1924