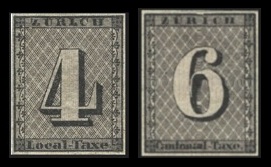 The Canton of Zurich issued the 4 Rp. and 6 Rp. adhesive definitive postage stamps, shown above, in 1843. They were imperforate and printed in black, over a background network of red  lines. There were five types of each denomination.


In 1862, reprints were created of these two denominations, which show signs of plate wear and which do not have the red lines at all.  The reprints of these stamps are also very expensive. 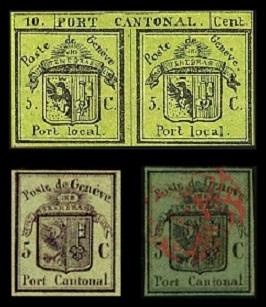 The pair at the top of the scan (Zu. #3, Mi. #1, Sc. #2L1) shows the 1843 postage stamp issue of Geneva. It is a 10 C. denomination stamp pair, comprised of two 5 C. denomination stamps. These were used as pairs and individually, depending on the rate for the particular piece of mail.

The two stamps at the bottom of the scan are from the three varieties issued between 1845 and 1848.

In 1847, what appears to be the 1846 design, printed in yellow green on white paper, was actually a cutout from an 1846 stamped envelope which was affixed to folded letters. This usage was authorized by the postal authorities. The mint stamped envelopes, with this design, are not terribly rare, but cut-out used examples and examples on folded letters are rare and very expensive.

Shown above is the wonderful bi-colored and embossed 1845 issue of Basel. For one of the earliest adhesive postage stamps, the manufacture of the Basel issue involved advanced multi-color printing technology that wouldn't be attempted by other nations for decades. Considered one of the most beautiful stamps in the World, today it is also one of the most expensive classical issues of the World.

These stamps, as a matter of fact, were all issued between 1849 and 1851, and they were in used concurrently with the first issues of the Helvetic Confederation, beginning in 1850.

SPECIAL NOTE: As of 2018, I only have one of the stamps shown on this page in my Swiss collection, and it is one of the most common Zurich varieties. These scans were located on the Internet and modified to be presentable here. The combined Scott Catalog value of the varieties shown here is about $200,000.00, which is completely out-of-reach for the average stamp collector.

Nice appearing REPAIRED examples can be acquired for much less though, for the collector with just a few thousand dollars to spend!