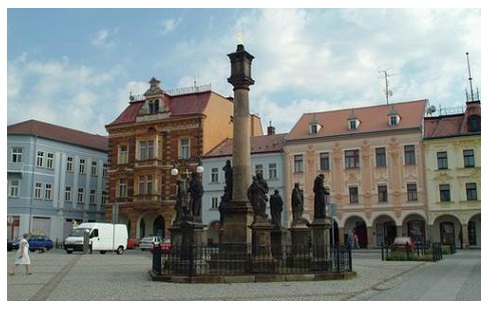 The former Sudetenland town of Rumburg, Rumburk in Czech, is situated on the northern edge of Bohemia. It shares a border crossing with the German town of Seifhennersdorf in Saxony.

Rumburg was founded sometime during the late 13th Century, and it is famous for its beautiful historical inner city with many historical sights, such as an old monastery, dating from the 18th Century.

The postcard above pictures the market square. Around the square are townhouses from the Baroque Era through the 19th century.

In the middle of the square is a beautiful Baroque Marian Column from 1681. It commemorates lives lost during an epidemic. The sculptures were created between 1725 and 1775. 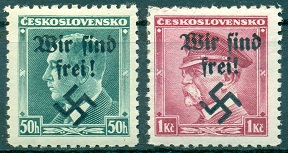 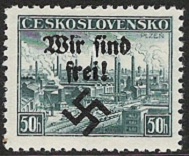 The German annexation of Rumburg had occurred very quickly, following the Munich Conference, and the post office did not yet have any supplies of Third Reich postage stamps. As an emergency measure, the postmaster authorized the overprinting of the current inventory of Czechoslovakian stamps with the Wir sind frei! overprints. Several of them are shown in the images above.

These overprints are the most affordable of all the Sudeten local town overprints, with only a few that would be considered prohibitively expensive.

The sale of the overprinted Czechoslovakian stamps ended on October 19, 1938, and they were replaced by the postage stamps of the Third Reich.

Near the end of World War II, Rumburg was "liberated" by the Soviet army.  The German-speaking population was forcibly expelled, and it was replaced by Czech settlers, who changed the name of the town to Rumburk.