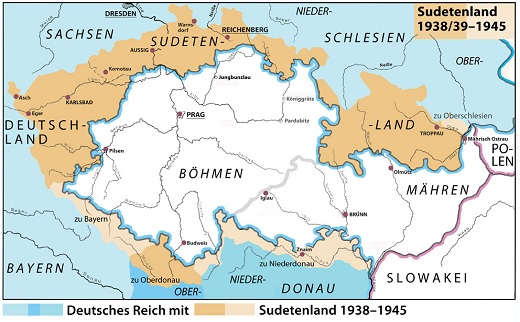 The Sudetenland, in the first half of the 20th Century, was the German name for the border regions of Northern and Western Czechoslovakia. These regions were mostly inhabited by ethnic Germans. It is shown as the light brown shaded areas in the map above. Before 1918, this area had little mention in history, as it was just another ethnic German part of the Austro-Hungarian Empire.

After World War I, the Austro-Hungarian Empire was broken up into separate nations. In September 1918, United States President Woodrow Wilson proposed ceding these ethnic German parts of Bohemia to Germany and Austria. The U.S. delegation later backed off this proposal, and in 1919, these ethnic German areas were incorporated into the new nation of Czechoslovakia.

As a result of this decision, more than 23% of the total post-war population of Czechoslovakia was made up of Germans. Tensions between the Czechs and the Germans, who constituted the majority in Sudetenland, lingered through the 1920's and intensified in the 1930's.

During the Great Depression these mainly mountainous regions populated by ethnic Germans were hurt by the economic crisis more than the interior parts of Czechoslovakia were. High unemployment made the people more open to populist and extremist movements, and the parties of the German nationalists gained immense popularity among the ethnic Germans within Czechoslovakia. 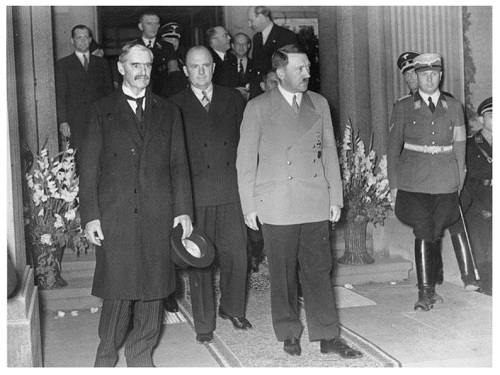 Neville Chamberlain and Adolph Hitler
At the Munich Conference in 1938
From: Bundesarchiv Via: Wikipedia

Right after the German annexation of Austria by the Third Reich in 1938, Adolph Hitler made himself the advocate of ethnic Germans living in Czechoslovakia, triggering the "Sudeten Crisis".

British Prime Minister Neville Chamberlain met with Adolf Hitler in Berchtesgaden on September 15 and agreed to the cession of the Sudeten territories. Three days later, French Prime Minister Édouard Daladier did the same. No Czechoslovak representative was invited to these discussions.

Chamberlain met Hitler in Godesberg on September 22 to confirm the agreements, but Hitler now demanded, not only the annexation of the Sudeten territories, but also the immediate military occupation of the territories. To achieve a solution, the Italian leader, Benito Mussolini, suggested a conference of the major powers in Munich. On September 29, 1938, Hitler, Daladier, Mussolini, and Chamberlain met and signed the Munich Agreement, accepting the immediate occupation of the Sudetenland. Chamberlain then returned to Britain with the agreement, proclaiming "Peace in Our Time". This peace did not last long though.

In March 1939, Germany invaded Czechoslovakia and proclaimed the Czech Protectorate of Bohemia and Moravia. The Slovak portion proclaimed their own state, the Slovak Republic, which became a satellite state and ally of Germany.

After World War II the ethnic German population, estimated at between 700,000 and 800,000 people, was expelled to areas within the American and Soviet occupation zones of the former Third Reich. The former Sutetenland was re-settled by Czechs, and it again became part of the Republic of Czechoslovakia.

Return to German Occupation Stamps from
Sudetenland - A Brief History