The first commemorative St Pierre and Miquelon stamps were issued in 1931.  All but one of the commemorative sets issued between 1931 and 1939 were actually French colonial omnibus sets for celebrations that were taking place in France or elsewhere. 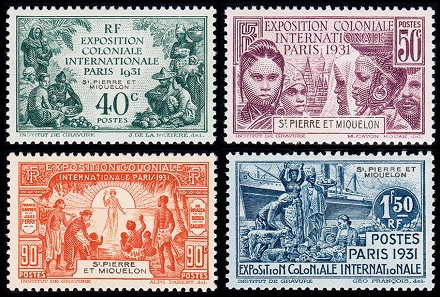 The four commemorative St Pierre and Miquelon stamps shown above were issued on April 13, 1931 to publicize the International Colonial Exposition, held in Paris, France during six months of 1931. 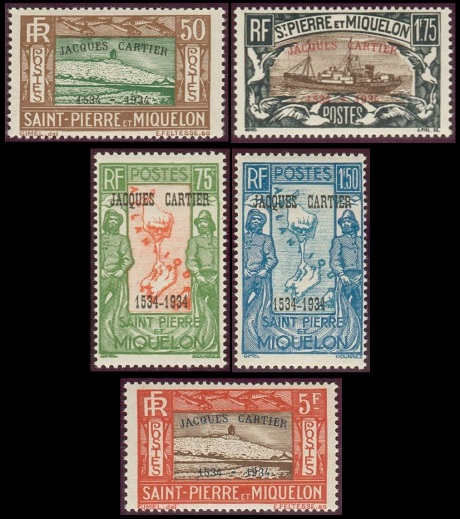 The five definitive St Pierre and Miquelon stamps shown above were overprinted "JACQUES CARTIER / 1534-1934" on October 18, 1934 to celebrate the 400th Anniversary of the Landing of Jacques Cartier.

Jacques Cartier (1491-1557) was a French explorer and the first European to map the Gulf of St. Lawrence and the St. Lawrence River (1534-1542).  He claimed the territory along the St. Lawrence River for France, calling it "Canada", after the Iroquois Indian word "kanata", meaning "village" or "settlement", and he referred to the native inhabitants as "Canadiens".  Cartier was also one of the first explorers to formally acknowledge that the New World was a separate land mass from Europe and Asia. 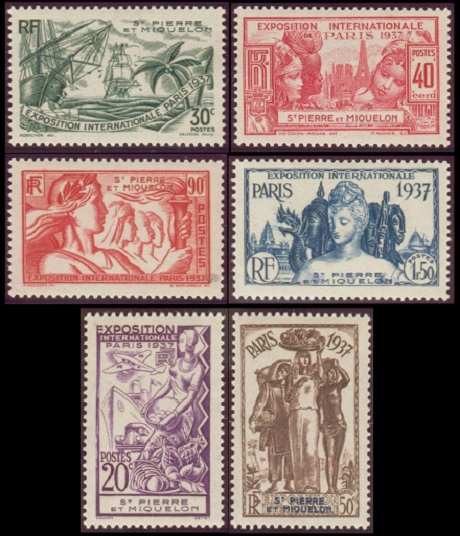 The six commemorative St Pierre and Miquelon stamps shown above were issued in 1937 to publicize the Paris International Exposition. 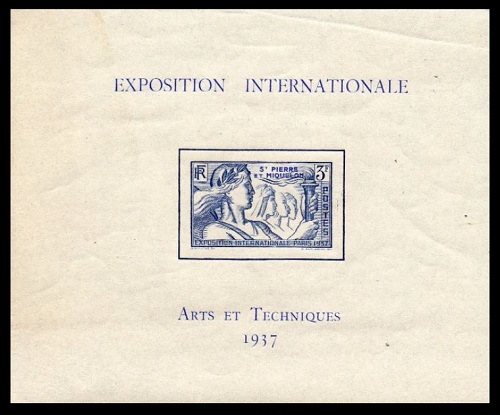 The 3 F. St Pierre and Miquelon souvenir sheet shown above (Sc. #171) was issued in 1937 to publicize the International Colonial Arts Exhibition.

The design features an allegorical depiction of France and the Empire.

The two commemorative St Pierre and Miquelon stamps shown above were issued on May 10, 1939 to publicize the New York World's Fair.

The common design features Colonial Natives with the New York Skyline in the background.

The New York World's Fair was held at Flushing Meadows, Queens, New York from April 30, 1939 through October 31, 1940.  It was the second largest World's Fair of all time, exceeded only by the St. Louis - Louisiana Purchase Exhibition of 1904.  Many countries around the World participated in the World's Fair, and in the two years it was open, over 44 million people visited its exhibits.