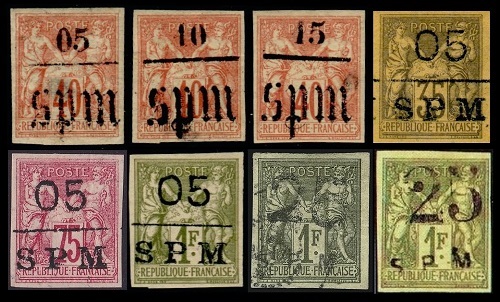 First Stamps of St Pierre and Miquelon
Issued in 1885

Definitive St Pierre and Miquelon stamps first appeared in 1885, though French stamps and French Colonies stamps had been in use in the territory since 1859.  The new stamps were overprinted "S P M" and the denomination, in French Centimes, as shown above.

Historically, St Pierre and Miquelon is the last remnant of the once vast French Empire in North America, known as New France.  New France included the colonies of Canada (Quebec), Acadia (Maritime Provinces and Maine), Newfoundland (Newfoundland Island and Labrador), and Louisiana (Louisiana Territory).  At its peak, during the early 18th Century, New France stretched from Newfoundland to the Rocky Mountains and from Hudson Bay to the Gulf of Mexico!  By the terms of the Treaty of Utrecht of 1712 and the Treaty of Paris in 1763, all of New France, except for the colony of St Pierre and Miquelon, was ceded to Great Britain and Spain. 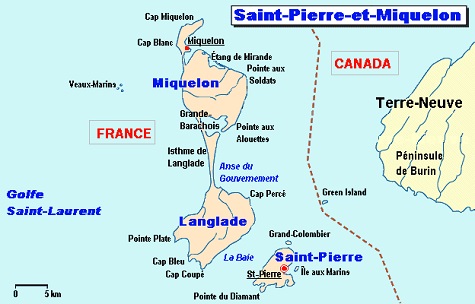 St Pierre and Miquelon is comprised of three groups of islands located in the Gulf of St Lawrence, about 16 miles south of Newfoundland Island.  The former French colony is now a department (state or territory) of the Republic of France.  Its (approximately) 6,100 inhabitants are citizens of the Republic of France, and they vote in French national elections.  Not surprisingly, the economy of St Pierre and Miquelon is based on the fishing industry.

Arrival of Governor Dangeac in 1763
Airmail Stamp issued in 1963

St Pierre and Miquelon has had a long and sometimes turbulent history, dating back to the arrival of the first Portuguese and French explorers during the early part of the 16th Century.  Much of the history, as well as the role of the North Atlantic fishing industry, has been well documented on pictorial St Pierre and Miquelon stamps.

Collecting all the St Pierre and Miquelon forerunner issues and postage stamps from 1859 to date can be a considerable challenge.  Many of the early definitive overprints of 1885 to 1891 and some of the Free France issues of 1941 to 1942 are counted among the World's rarest stamps!  For an impressive looking collection, based on a reasonably modest budget, your webpage author would recommend collecting the stamps from 1892 to 1940 and from 1942 to date. 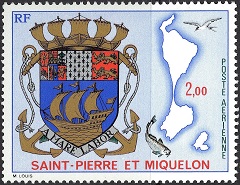 Similar to the philately of France and their other colonies, many St Pierre & Miquelon stamps are also available as philatelically-inspired imperforates, essays, proofs, and trial color proofs.

Many of the large-format pictorial definitive, commemorative, and airmail stamps of St Pierre and Miquelon are beautifully engraved, making them miniature works of art in themselves, and many of these stamps often adorn thematic collections as well.

The philatelic aspects of St Pierre and Miquelon stamps can also provide interesting areas for study.  The 19th Century overprinted stamps exist with overprint errors and inverted overprints that, in some cases, aren't much more expensive than the stamps with normal overprints.

Links to historical articles and reviews of many of the individual classical and early modern St Pierre and Miquelon stamps will eventually appear at the top of the third column of this page.

Return to Home Page from
St Pierre and Miquelon Stamps