The commemorative stamps of Sweden, for the period between 1903 and 1932, celebrate the new post office building, the achievements of great Swedish monarchs, and the hosting of the Universal Postal Union (UPU) Congress during 1924.  This period also witnessed the production of commemorative stamps in booklet or coil format, instead of the usual sheet or miniature pane format, a Swedish innovation that would continue until modern times.

The three commemorative stamps of Sweden shown above (Sc. #164-166) were issued on July 28, 1920 to celebrate the 300th Anniversary of the Swedish Post, which ran between Stockholm and Hamburg.

The three commemorative stamps of Sweden shown above (Sc. #194-196) were issued in June 1921 to celebrate the 400th Anniversary of Gustavus I Vasa's War of Independence from the Danes.

The stamps were issued in one format, perforated 10 vertically coil stamps on unwatermarked paper, as shown above.

The common design features the right-facing likeness of Gustavus I Vasa. 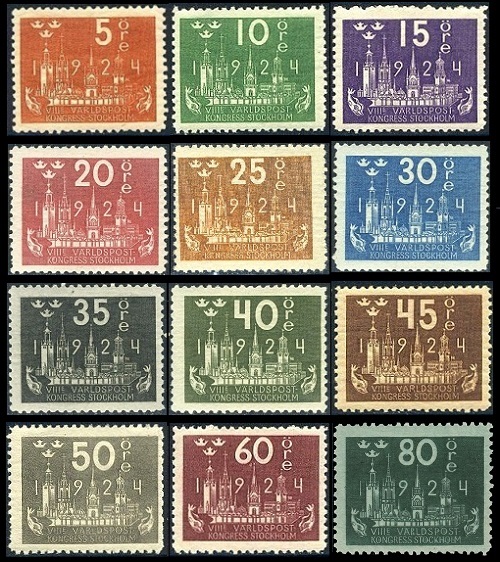 The fifteen pictorial stamps shown above (Sc. #197-211) were issued on July 4, 1924 to celebrate the 8th Universal Postal Union Congress, held in Stockholm. 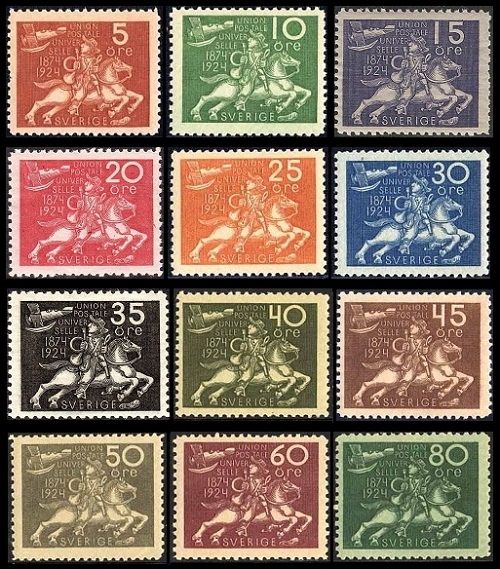 The fifteen pictorial stamps shown above (Sc. #213-227) were issued on August 16, 1924 to celebrate the 8th Universal Postal Union Congress, held in Stockholm.

The six commemorative stamps shown above (Sc. #230-35) were issued on November 1, 1932 to commemorate the 300th Anniversary of the Death of King Gustavus II Adolphus, who was killed on the battlefield of Lützen on November 6, 1632.

The common designs feature a depiction of the Death of Gustavus II Adolphus.


Return to Stamps of Sweden from
Commemoratives of 1903-1932

The 5 K. denomination stamp shown above (Sc. #66) was issued on October 26, 1903 to celebrate the opening of the new General Post Office in Stockholm. 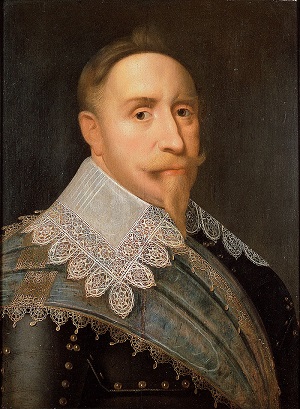 Becoming King at the age of sixteen, he is considered the founder of Sweden as a Great Power, and he is regarded as one of the greatest military commanders of all time.  He was called "The Lion of the North" and "The Golden King" by other European monarchs.

Gustavus may have become one of the great European leaders, had he not been killed at the battle of Lützen (Saxony) on November 6, 1632. 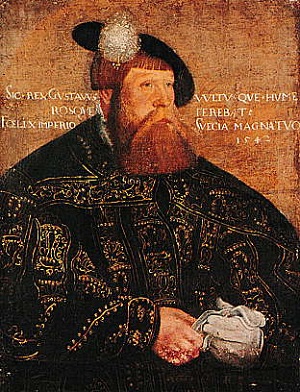 He worked to end feudalism and to bring about a Swedish Reformation.  During his reign Sweden made a complete break with the Danish supremacy and with the Roman Catholic Church.  He has been labeled as the father of modern Sweden.