The definitive stamps of Sweden, for the period between 1885 and 1904, reflected the last of the Numeral and Arms definitives, provisionally revalued stamps, the first monarch to appear on a Swedish stamp, a new portrait definitive stamp series, and the appearance of Sweden's first postage stamp booklets.

The 10 Öre denomination portrait definitive stamp of Sweden shown above (Sc. #39) was issued on January 1, 1885.  This stamp is typographed on unwatermarked paper.

The design features a left-facing portrait of King Oscar II.  This is the first Swedish definitive postage stamp to feature the portrait of a reigning monarch. 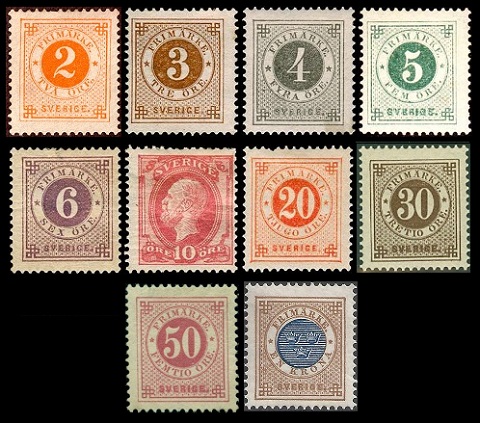 The ten definitive postage stamp types of 1877-1885 shown above were re-issued between 1886 and 1891.  These new stamps are identical to the previous issues, however, each of these new stamps has a colored posthorn printed on the back side, as shown above.

A shortage of 10 Ö. stamps necessitated the provisional overprinting and re-valuation of the two numeral type definitive stamps of Sweden shown above on October 1, 1889. 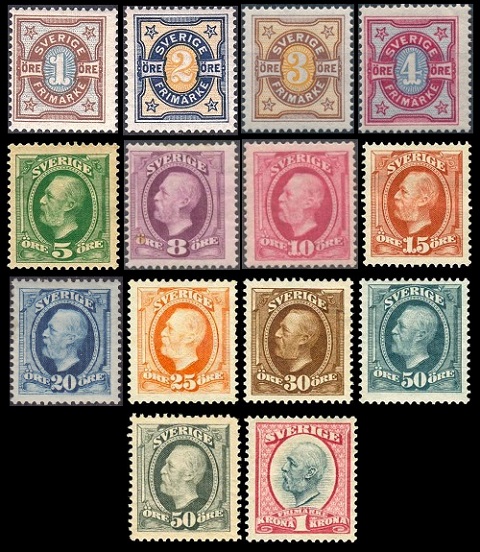 The fourteen Numeral and Portrait type definitive stamps of Sweden shown above were issued between 1891 and 1911.  The stamps are all perforated 13.  The four low denominations are typographed, and the remaining denominations are all engraved.

The catalog attributes for stamps that are printed on paper with WMK 180 are as follows:

The catalog attributes for stamps that are printed on unwatermarked paper are as follows: 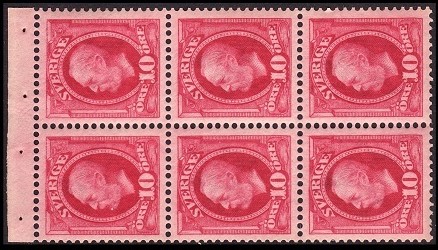 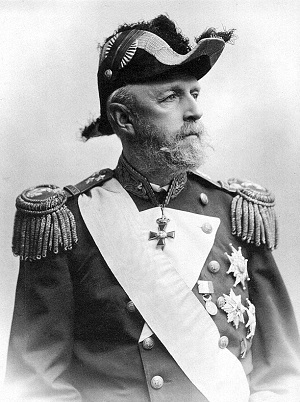 He was a multifaceted individual.  Besides being a royal head-of-state, he was also active in foreign statesmanship, science, writing, music, and exploration.  He was the last Swedish monarch to be coronated or to have worn a crown.

At the time of the king's death in 1907, the Swedish monarch no longer ruled Norway.  His eldest son, Oscar Gustaf Adolf (1858-1950), ascended to the Swedish throne as King Gustaf V.