A presumed plate engraver's mistake, sometime after 1855, resulted in one of the World's rarest postage stamps, only surpassed in value by the unique British Guyana One Penny Magenta.

The error is known as the Treskilling Yellow, as the 3 Skilling denomination was only printed in blue green.  It is presumed that a plate of the 8 Skilling denomination, which was normally printed in yellowish orange, was broken and that one or more of the impressions was accidentally replaced with that of the 3 Skilling denomination.  It is unknown how many of these 3 Skilling stamps of Sweden were printed from the 8 Skilling plate, before the problem was corrected.  The example shown above (Sc. #1a) is the discovery copy, found in 1886. It is postmarked at Nya Kopparberget on July 13, 1857.  To this date, no other example has ever been found.  This stamp was last sold at auction in 2010, where it realized $2,300,000.00.

Though Sweden had been settled by Germanic tribes since prehistoric times, their recorded history begins with the Viking Age.

The Swedish Viking Age lasted from the 8th to the 11th Centuries.  Whereas the Norwegian and Danish Viking expeditions traveled westward, across the Atlantic Ocean, and along the coast of Europe, the Swedish Viking expeditions traveled eastward and southward, navigating the rivers of Eastern Europe, and eventually reaching the Black Sea.  Many contemporary rune stones in Sweden provide testimonials to these voyages of discovery, conquest, and settlement.

Sweden eventually evolved into a kingdom, dominating much of what is today Finland, the Baltic States, and Eastern Europe.  By the 17th Century, Sweden emerged as one of the great European powers.

Between the 17th and 18th Centuries, Sweden's power was slowly eroded, and by the early part of the 19th Century, they had lost almost all their territories outside of Sweden.

During the 20th Century, Sweden evolved into a nation with a peacemaking role, while maintaining their strict policy of political neutrality.  Other than Switzerland, Sweden is the only other European country that has NOT been involved in any military conflicts during the 19th and 20th Centuries. 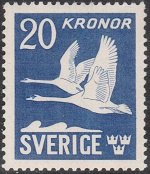 The history of Sweden has been well documented on its commemorative stamps.  Collecting the colorful commemorative booklets of Sweden can provide many years of enjoyment, and it can result in a very impressive looking stamp collection.

Sweden was also an early innovator, in its experimentation with vending machine booklets (1904) and coil stamps (1903).  Since the 1940's, almost all the postage stamps of Sweden have been issued in coil format, booklet format, or as miniature sheets.

Links to historical articles and reviews of many of the individual classical and early modern postage stamp issues of Sweden will eventually appear at the top of the third column of this page.


Return to Home Page from
Stamps of Sweden