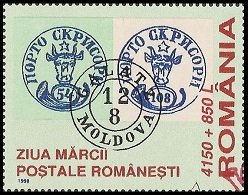 140th Anniversary of the First Romanian Postage Stamps
(5,000 Lei Stamp from the Souvenir Sheet issued in 1998)

The first stamps of Romania were issued by the Principalities of Moldavia and Wallachia between 1858 and 1864.  Many of these earliest Romanian stamps, the so-called "Bull-Head" issues of Moldavia, are now ranked as some the World's greatest philatelic rarities. 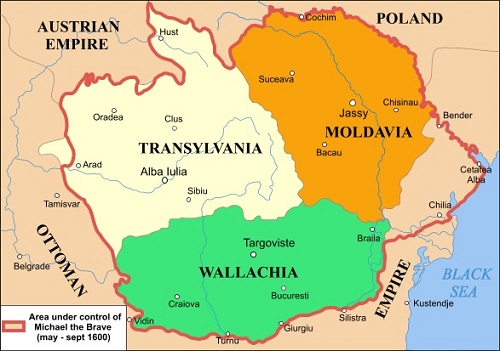 The Romanian Principalities in 1600
From: Wikipedia -- By: Anonimu

The geographic area we know today as Romania has been inhabited by the ancestors of the Romanian people for over 40,000 years.  During the Ancient Roman Empire, it was part of the Roman Province of Dacia.  Dacia was a troublesome province for the Romans, but the Danube River, the Northern border of the Roman Empire, flowed through the province.  The control and fortification of this border was of critical importance to the security of the Roman Empire.

Much of the history of the Romanians, from the 15th Century through the 19th Century, has been dominated by their struggle against domination by the Ottoman Empire.  This history has been well documented by the postage stamps of Romania throughout the 20th Century. 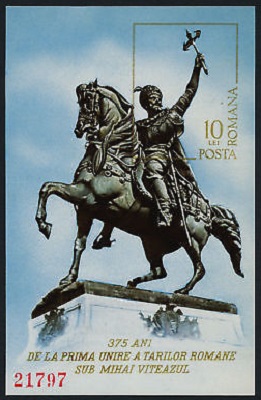 Michael the Brave (1558-1601)
Prince of Wallachia, Transylvania, and Moldavia
375th Anniversary of the first Union of Romanian States
(10 Lei Souvenir Sheet issued in 1975)

After World War I, the former Austro-Hungarian Empire territories of Bessarabia, Bukovina, Transylvania, Crisana, Muramures, and Banat were added to the Kingdom of Romania.  After World War II, a Socialist Republic was established, which survived until the late 20th Century.

Since the first Romanian stamps of 1858, more than 6,000 different postage stamps have been issued.  Of these, most of the stamps issued since about 1865 are reasonably affordable.  Collecting Romanian stamps can offer many years of enjoyment and can result in a very impressive looking collection.  The subject matter of Romanian postage stamps also offers many different thematic collecting possibilities.

Reviews of many of the postage stamp issues of Romania, as well as occasional historical articles, will eventually appear in the page link section at the upper right.

Illustrating and describing ALL the stamps of modern Romania is far beyond the scope and capability of this website.  Fortunately for everyone, someone has already done that.  Here is a link to an excellent English-language website specializing in the stamps of Romania.


Return to Home Page from Stamps of Romania