Over the years, Norway has issued a lot of definitive postage stamps, but the output of commemorative special issues has been rather conservative.  Over their 160 year philatelic history, Norway has issued far fewer stamps than most other nations.  This makes a collection of Norway stamps quite manageable, and, for the dedicated stamp collector, nearly completable. 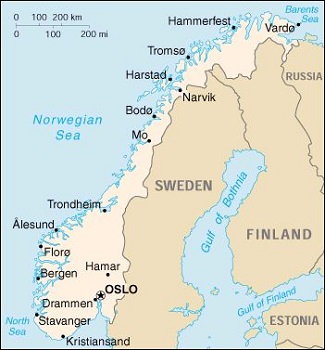 The early inhabitants of Norway were farmers and fishermen, living in small communities, thus they had little to offer, as far as foreign trade.  During the Roman Empire, the inhabitants of present-day Norway did have contact with Roman Gaul, as evidenced by the discovery of Roman cauldrons in Southern Norway.  The Norse also learned the Runic alphabet from their more advanced neighbors to the south, as well.

Between the 8th Century and the 11th Century, Norway was an integral part of the Viking Realm, and it was Norse explorers that actually colonized the Faroe Islands, Iceland, and Greenland.

Between the 14th Century and the 20th Century, much of the history of the Kingdom of Norway was consumed by forced unions, at different times, with the dominant Kingdoms of Denmark and Sweden.

It wasn't until 1905 that the Kingdom of Norway would break free from its domination by the Kingdom of Sweden and become a fully sovereign kingdom on its own.  The Norwegian parliament offered the throne of Norway to Prince Carl of Denmark.  He took the name King Haakon VII, becoming the first monarch of a fully independent Norway in 586 years!

Over the centuries, Norwegians have made significant contributions, including exploration, science, literature, painting, and music, and many of these famous people have been honored on the commemorative postage stamps of Norway.

Links to historical articles and reviews of each of the individual classical and early modern postage stamp issues of Norway will eventually appear at the top of the third column of this page.


Return to Home Page from
Stamps of Norway