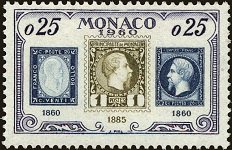 Postage stamps of Monaco or Monegasque stamps were first issued in 1885, however, the use of prepaid postage stamps and the postal history of Monaco dates back to the middle of the 19th Century.

Monaco is a constitutional monarchy, but the ruling Prince has almost absolute political power, as he appoints the Minister of State.  With only a few brief interruptions, the princes of the House of Grimaldi have ruled Monaco since 1297.

Today, the principality is sovereign city-state, bordered on three sides by France.  The total area of the country is 499 square acres, less than one square mile, making it the second smallest nation on the Earth.  Yet the 38,000 residents of Monaco are among the wealthiest people in the world, with an estimated 30% of them being millionaires.  Monaco, with it's hotels, casino, beaches, and harbor, has long been a favorite destination for tourists and the rich and famous. 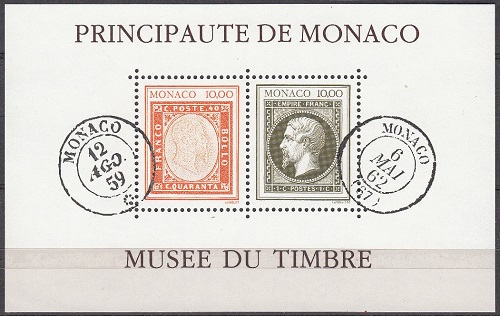 The stamp issues of Monaco have had a major presence in stamp collecting for most of the last Century.  Besides being rulers, the 20th Century princes of Monaco have been stamp and coin collectors!  The Monaco Philatelic Bureau was established by Prince Luis II in 1937.  During the reign of Prince Rainier III, the prince became personally involved in all aspects of the design and production of Monaco's stamps.  Prince Rainier's collection formed the basis for the Monaco Museum of Stamps and Coins, which was established in 1950. 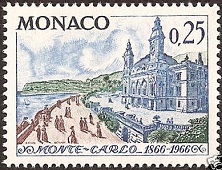 Collecting Monaco stamps can be a lot of fun, and most of the stamps are reasonably inexpensive.  Similar to the philately of France and their colonies, many of the stamps of Monaco are also available as philatelically-inspired imperforates, essays, proofs, and trial color proofs.  Monaco stamps, with their many subjects, are also popular with thematic stamp collectors.  Not surprisingly, postage stamps are one of Monaco's principal commercial exports.

The philatelic aspects of Monaco stamps can also provide interesting areas for study.  Nineteenth Century Monaco stamps have many paper, separation, printing, and color varieties, and a study of the postal history of this principality can also include classical stamps of Sardinia and France, as well as those of Monaco.

Links to historical articles and reviews of many of the individual classical and early modern postage stamp issues of Monaco will eventually appear at the top of the third column of this page.

Return to Home Page from
Stamps of Monaco