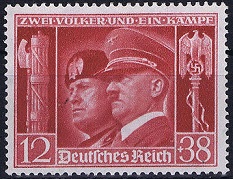 The commemorative stamps of Italy, for the period from 1941 to 1942, encompass the wartime relationship between Italy and Germany, an ancient Roman historian, an astronomer, a composer, and wartime patriotic propaganda.

The 10 C., 20 C., and 25 C. denominations with the military profiles of the higher denomination stamps, were prepared but never issued.  They were sold for charitable purposes after the war, and they are not expensive.

Titus Livius Patavinus (59 B.C. - A.D. 17), known as Livy, was a Roman historian.  He wrote a monumental history of Rome and the Roman people, from 753 B.C. through A.D. 14.  He was on familiar terms with the Julio-Claudian family, and he advised Caesar Augustus' grand nephew, the future emperor Claudius, to focus on historical writing.

It was his championing of the theory of helocentrism, his theory that the earth and planets revolve around the sun, that got him into trouble with the Church of Rome.  He was tried in 1633 and found guilty of Suspicion of Heresy.  He was forced to recant his theory, and he spent the remainder of his life under house-arrest.

Gioachino Antonio Rossini (1792-1868) wrote 39 operas, as well as sacred music, chamber music, and some instrumental and piano works.  His song-like melodies are evident throughout his scores, and for these, he has been nicknamed the "Italian Mozart".  Until his retirement in 1829, he had been the most popular opera composer in history.

The propaganda stamps of Italy shown above (Sc. #427-38) were issued in 1942 in Honor of the Italian Armed Forces.

The four labels are as follows:

The war was "over" for the Kingdom of Italy.  Mussolini was forced to flee to Northern Italy, where he managed a German-controlled Socialist Republic for the remainder of World War II.

Return to Stamps of Italy from
Commemoratives of 1941-1942