The commemorative stamps of Italy, for the period from 1938 to 1939, celebrate the inventor of radio, the proclamation of the new Italian Empire, and Italian railroads.

The stamp designs are based on a circa 1923 photograph of Marconi.

Guglielmo Giovanni Maria Marconi (1874-1937), the 1st Marquis Marconi, was an Italian inventor and electrical engineer.  He is known for his pioneering work in long distance radio transmission and in radio telegraph, and he is often credited as being the inventor of radio.  In 1929, Marconi was raised to the nobility, as a Marquis, by King Victor Emmanuel III. 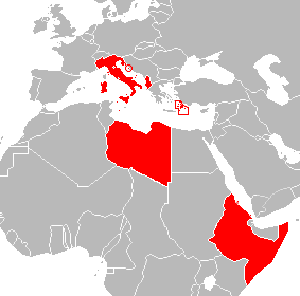 On January 13, 1936, fascist dictator Benito Mussolini made an announcement to his country.  He asserted Italy's rightful claim to the territories controlled by the ancient Roman Empire.  This announcement was leaked to the World, and of course, most of his European and Mediterranean neighbors were outraged.

As of 1939, Italy's new empire consisted of Italy, a few islands in the Adriatic Sea, Libya, Ethiopia, and Somalia, a pitiful substitute for the empire of Ancient Rome.  The Roman Empire endured for many hundreds of years.  Just over seven years after the declaration of the new Italian Empire, the new empire, as well as the fascist government of Benito Mussolini, would no longer exist.

The design of these commemorative stamps features a wood-burning engine and a streamlined electric engine.

Return to Stamps of Italy from
Commemoratives of 1938-1939