The commemorative stamps of Italy, for the period from May 1934 to September 1934, celebrate two scientists, soccer championships, and a cherished military honor.

The stamps shown above (Sc. #322-23) were issued on May 23, 1934 to commemorate the 75th Anniversary of the Invention of the Dynamo by Antonio Pacinotti.

The two designs feature a portrait of Antonio Pacinotti.

Antonio Pacinotti (1841-1912) was a Professor of Physics at the University of Pisa.  He is best known for inventing an improved form of direct-current electrical generator or dynamo in 1860.  His new device was one of the first functional electrical motors.

The word for Soccer, in Italian, is Calcio.  It is derived from the medieval game of "Calcio Fiorentino" or "Florentine Kick-ball".  It doesn't literally mean football or soccer. The Italian verb "calciare" means "to kick".  A soccer player is called a "calciatore" or "kicker".

Six of the denominations of these stamps of Italy feature soccer players.  Three of the airmail denominations show planes flying above soccer stadiums in Turin, Florence, and Bologna.

The 2nd World Soccer Championship, also known as the 1934 FIFA World Cup, was held in Italy from May 27 through June 10, 1934. The games were played in Turin, Milan, Trieste, Genoa, Bologna, Florence, Rome, and Naples.  The host nation, Italy, became the 2nd FIFA World Cup champion, beating Czechoslovakia 2-1, in the final.  Germany finished in third place, and Austria finished in fourth place.  The United States team was eliminated in the first round.

The two stamps of Italy shown above (Sc. #329-30) were issued on August 18, 1934 to celebrate the First International Congress of Electro-Radio-Biology, held in Venice during September 1934.

The stamp designs feature a portrait of Luigi Galvani.

Luigi Galvani (1737-1798) was an Italian physician.  He discovered that the muscles of dead animals twitched, when they were struck by a spark.  This was one of the first experiments in the study of bio-electricity, a field that still studies the electrical patterns and signals of the nervous system.

Today, this field is called Radio-biology or Radiation Biology, which is a field of clinical medical sciences studying the action of ionizing radiation on living things.

The stamp designs are as follows: 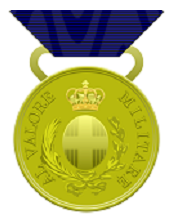 -- Medal of Valor - Kingdom of Italy

The Military Medal of Valor is the Italian equivalent of the U.S. Congressional Medal of Honor.

The medal was originally created in 1793 by King Victor Amadeus III of Sardinia, but the requirements for the reward were excessively strict.

Return to Stamps of Italy from
Commemoratives of 1934