The commemorative stamps of Italy, for the period from 1929 to 1931, celebrate a famous monastery, a royal wedding, a military hero, a Roman poet, and finally, a beloved saint.

Here begins the tradition of extensive sets of commemorative stamps which showcase the cultural landmarks and memorable heroes of Italy's glorious 2,500 year past. 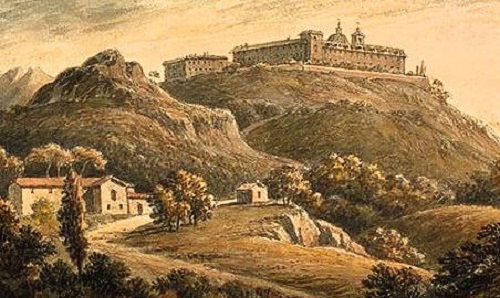 Abbey of Monte Cassino
From:  A 19th Century Painting

The seven commemorative stamps of Italy shown above (Sc. #232-38) were issued on August 1, 1929, to commemorate the 1,400th Anniversary of the Founding of the Abbey of Monte Cassino by St. Benedict of Nursia in 529 A.D.

The three stamps shown above (Sc. #239-41) were issued on January 8, 1930 to celebrate the Wedding of Prince Umberto of Savoy to Princess Marie Jose of Belgium.

The design features the conjoined left facing busts of Prince Umberto and Princess Marie Jose, flanked by the arms of the Kingdom of Belgium and the House of Savoy.

Prince Umberto (1904-1983) was the son of King Victor Emmanuel III and the heir to the throne.  Princess Marie Jose (1906-2001) was the daughter of King Albert I of Belgium.  Upon the abdication of his father on May 9, 1946, Prince Umberto ascended to the throne as King Umberto II.  His reign only lasted about a month though, due to the abolition of the Italian monarchy.  He lived out the remainder of his life in exile. 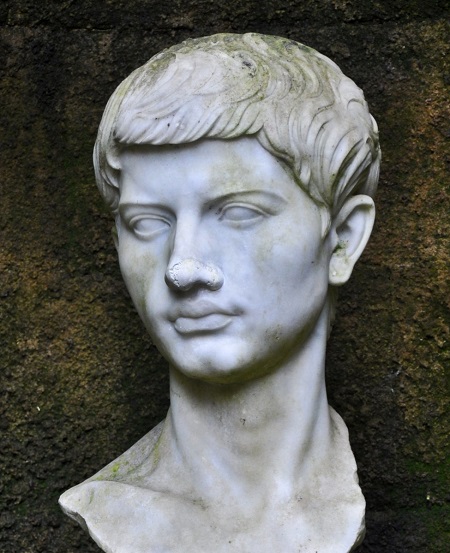 The three stamps shown above (Sc. #265-67) were issued on November 29, 1931 to commemorate the 50th Anniversary of the Royal Naval Academy at Livorno.

The three designs feature the Tower of Meloria, the Training Ship "Amerigo Vespucci", and the Navy Cruiser "Trento".

Return to Stamps of Italy from
Commemoratives of 1929-1931

Monte Cassino is a 1,706 foot mountain, about 80 miles south of Rome, overlooking the town of Cassino.  Even in the 6th Century, much of the area was still pagan, and there was a Temple of Apollo on the mountaintop.  Using the temple site, Benedict of Nursia began the construction of his monastery there in 529.  Once the monastery had been established, Benedict never left Monte Cassino again, and he died there on March 21, 543.  It was at Monte Cassino that Benedict wrote The Benedictine Rule that became the founding principle of Western Monasticism.  Benedict was canonized by Pope Honorius III in 1220.  Today, he is considered the Patron Saint of Europe.

Due to its militarily strategic location, the Abbey of Monte Cassino has been attacked and destroyed many times over its 1,475 year history.  The most serious of these was the World War II battle fought there in 1944, in which the abbey was completely demolished by aerial bombing.  After the war though, it was painstakingly rebuilt in the original Gothic style.

Francesco Ferrucci (1489-1530) was a Florentine military leader who fought against Habsburg and Spanish domination during the Italian Wars (1494-1559).  During the Battle of Gavinana, between the Florentine Republic and the Holy Roman Empire, Ferrucci was captured, and he was later slain by the enemy commander, Fabrizio Maramaldo.  Maramaldo's deed earned him immortal infamy, with his surname becoming a synonym for "villainous" in Italian.  The Italian language verb "maramaldeggiare" means "to bully a defenseless victim".

Publius Vergilius Maro, usually called Virgil (70 B.C. - 19 B.C.), was an Ancient Roman Poet of the early Augustan Period.  He is known for three major works, the Ecologues, the Georgics, and the Aeneid.  His Aeneid is considered the national epic of Ancient Rome.

Modeled on Homer's Illiad and Odyssey, the Aeneid follows the Trojan refugee Aeneas, as he struggles to fulfill his destiny and arrive on the shores of Italy.

Fernando Martins de Bulhões (1195-1231), also called Anthony of Padua and Anthony of Lisbon, was a Portuguese Catholic priest and friar of the Franciscan Order.  Though he died in Padua, Italy, he was born and raised in a wealthy family in Lisbon.  He was noted by his contemporaries for his forceful preaching and his expert knowledge of  the scriptures.