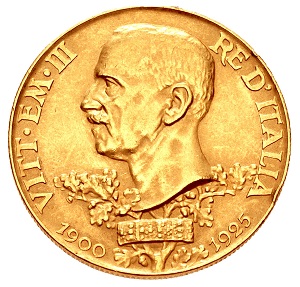 Commemorative stamps of Italy celebrated the Silver Jubilee of the Reign of King Victor Emmanuel III during 1925.

King Victor Emmanuel III was the titular head of state, but the actual head of government, at this time, was Benito Mussolini, who was embarking on the achievement of his dream, the creation of a modern Roman Empire.

These stamps of Italy were all engraved and unwatermarked, though watermarked sideways (plate border watermark) examples do exist, due to paper alignment errors.  All of these stamps come both perforated 11 and perforated 13 1/2.

Saint Francis of Assisi (1181-1226), born Giovanni di Pietro di Bernardone, was from a wealthy merchant family of Assisi.  He was nicknamed "Francesco" or "The Frenchman" by his father.  As a youth, he enjoyed upper class social activities and even served in the military.

In 1204, Francis had a vision that directed him back to Assisi, where he lost his taste for the worldly life.  Francis started preaching and soon amassed quite a following.  Francis new monastic order, the Order of Friars Minor, was authorized by Pope Innocent III on April 16, 1210.  This order would eventually become known as the Franciscan Order.  In 1223, he became the first person in recorded history to receive the stigmata, the presence of the wounds of Christ's Passion.

He was proclaimed a saint by Pope Gregory IX on July 16, 1228.  St. Francis is one of the most venerated religious figures in history.  He is known as the patron saint of animals and of the environment.  St. Francis is also one of the two patron saints of Italy, with the other being St. Catherine of Siena.  St. Francis of Assisi was also the creator of the "Christmas Creche", or what we refer to as the "Nativity Scene".

The four stamps of Italy shown above (Sc. #188-91) were issued during 1927 to commemorate the 100th Anniversary of the Death of Alessandro Volta.

Alessandro Volta (1745-1827) was an Italian physicist from Como, best known for his 19th Century invention, electrochemical cell or battery.  It is from his name that we get our modern terms, volt and voltage.  He was also the discoverer of methane.

The stamps of Italy shown below all pertain to the life of Emmanuel Philibert, the Duke of Savoy, but there are three different designs, and they were issued for three different events.  They will be shown and described by event.

The designs feature a full length likeness of Emmanuel Philibert in military attire.

Emmanuel Philibert (1528-1580) was the only surviving child of Charles III (1486-1553), the Duke of Savoy, and Beatrice of Portugal (1504-1538), the Duchess of Savoy.  Through his family heredity, he was related to Charles V, the Holy Roman Emperor and Phillip II, the King of Spain, and through marriage, he was later related to Henry II, the King of France and Henry I, King of Portugal.  He was also an early suitor to Lady Elizabeth Tudor, the future Queen Elizabeth I of England.  He became the Duke of Savoy in 1553, upon the death of his father.

Before becoming the Duke of Savoy, he served with distinction in the army of Charles V, in their war against Francis I, the King of France.  After becoming the Duke of Savoy, he continued to serve the Habsburgs, in hopes of recovering his hereditary lands, which had been previously seized by France.  He also served his cousin, King Phillip II of Spain, in the role of Governor of The Netherlands from 1555 to 1559.  Because of his distinguished military career, he was nicknamed "Testa di ferro" or "Ironhead" by contemporaries.

The design is a representation of Emmanuel Philibert and an Italian soldier of 1918. 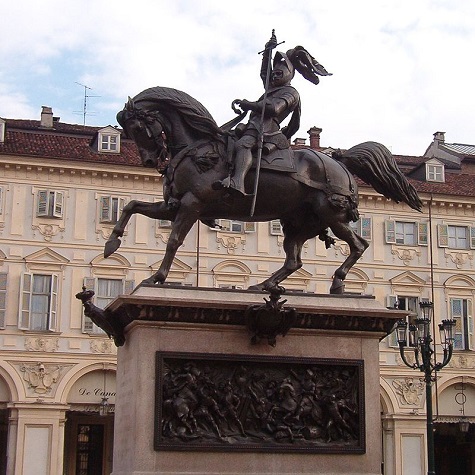 The design features the Equestrian Statue of Emmanuel Philibert, located in the Piazza San Carlo in Turin.  The statue is the work of Carlo Marochetti (1805-1867), the famous French sculptor, who was born in Turin.

Return to Stamps of Italy from
Commemoratives of 1925-1928