The first two airmail stamps of Italy were actually special issues for use on experimental mail-carrying flights.  But, these two stamps have the legacy of being the first airmail stamps issued by any country.

Also in 1917, a World War was being fought.  Though military aircraft were used during World War I, their use was somewhat experimental, as well.  Later in the war, these wooden aircraft, with wire, cloth covered wings, were primarily used for short range reconnaissance missions, as were dirigibles and balloons.  I have read in the past that some of the first instances of attempted aerial combat were somewhat comical.  One aircraft would fly over an enemy aircraft, and the pilot would lob bricks at his enemy or shoot at his enemy with a hand gun.  And then came cockpit mounted machine guns.  Many pilots that attempted to use their machine guns often wound up blowing their propellers to bits, resulting in very unpleasant landings!  With such a legacy, transport of mail or of passengers by airplane was not seriously considered at the time.

Most of these early airmail stamps described on this page are very expensive in used condition. One should be very careful when buying used condition examples that have not been authenticated! 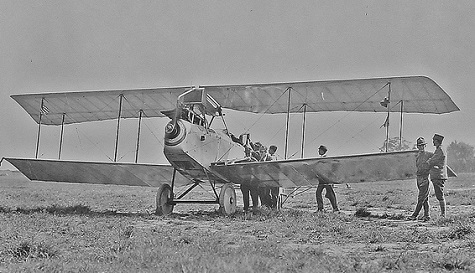 The 25 C. denomination Special Delivery stamp shown above (Sc. #C1) was overprinted and issued during May 1917 for the first Experimental round-trip Airmail Flight from Turin to Rome.

These stamps were only sold at post offices in Turin and Rome.

The pilot was Lieutenant Mario de Bernardi, flying a Pamilio PC1 biplane.  On May 20, 1917, the plane took off from Turin, carrying 400 pounds of mail, and it successfully completed the 400 mile flight to Rome in four hours and eleven minutes.  The return flight was scheduled for later that day, but it was delayed until May 27, 1917, due to bad weather.

The 40 C. denomination Special Delivery stamp shown above (Sc. #C2) was overprinted and re-valued to 25 C. on June 27, 1917 for the first experimental round-trip Airmail Flight by Seaplane from Naples to Palermo.

These stamps were only sold at post offices in Naples and Palermo.

During World War I, mail boats could not safely travel between Naples and Palermo, due to Austrian submarines in the area.  The Italian postal service began using seaplanes to deliver the mail.

The first series of definitive airmail postage stamps, specifically designed to pay postage on airmail letters, was issued between 1926 and 1928.  They are all shown above (Sc. #C3-9).

These airmail stamps of Italy are wide-format, and they all feature the left-facing profile of King Victor Emmanuel III.

On September 16, 1927, two denominations of the 1926 definitive airmail stamp series were re-valued with new denominations.  They are both shown above (Sc. #C10-11).