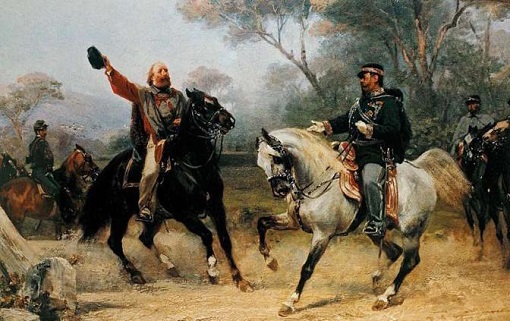 The commemorative stamps of Italy first appeared in 1910.  This time period coincided with the 50th Anniversary of the Italian Wars of Independence and the establishment of the Kingdom of Italy, so there was plenty to celebrate.

Many of the high-priced commemorative overprints have been forged.  Be very careful, when buying any overprinted stamps that do not have certificates of authenticity.

These two stamps of Italy were issued on April 15, 1910 to celebrate the 50th Anniversary of the Freedom of Sicily.  The designs feature a profile of Giuseppe Garibaldi (Sc. #115-16).

Giuseppe Garibaldi (1807-1882), actually born in France, became an Italian military leader and statesman, and he played a major role in the Italian Wars of Independence, leading to the establishment of the Kingdom of Italy.  Along with King Victor Emmanuel II and Giuseppe Mazzini, he is considered one of the three "Fathers of the Fatherland".

Garibaldi also participated in military enterprises in Brazil, Uruguay, and elsewhere in Europe, earning him the nickname "Hero of Two Worlds".

During the American Civil War, in 1862, U.S. President Abraham Lincoln actually offered Garibaldi a commission as a Major General in the Union Army.  Garibaldi stated that the only way he would accept the commission was if the war's objective was declared as being for the "abolition of slavery".  However, for political reasons, Lincoln could not commit to that declaration at the time.

These two stamps of Italy were issued on December 1, 1910 to celebrate the 50th Anniversary of the Plebiscite of the Southern Italian Provinces on October 21, 1860.  These designs also feature a portrait of Giuseppe Garibaldi (Sc. #117-18).  Around the portrait is a ribbon inscribed (in English) "Italy and Victor Emmanuel".  The tablet below the portrait is inscribed (in English) "Southern Plebiscite / 1860 21 October 1910". 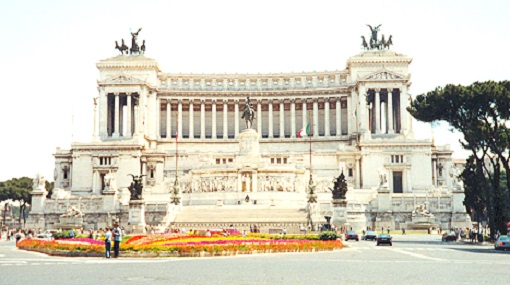 The Victory Monument
Photographed by the Webmaster in 2004

The four stamps of Italy shown above (Sc. #119-22) were issued on May 1, 1911 to celebrate the 50th Anniversary of the Unification of the Italian States to form the Kingdom of Italy.

The 5 C. denomination features a symbolic representation of the Fight for Freedom.

The 10 C. denomination features a symbolic representation of the Genus of Italy.  The central design actually depicts Apollo leading Pegasus to the Sacred Spring at Delphi.

The 15 C. denomination features a symbolic representation of the Glory of Rome.  The central design actually depicts an ancient scribe inscribing "DEA ROMA" (Goddess of Rome) on a monument.  The Goddess Roma was the personification of the Roman Republic, and her profile appeared on the obverse of the coins of the Roman Republic for hundreds of years.

One of the most enduring aspects of the 1911 unification celebrations was the Victory Monument, shown in the photograph above.  The monument is the largest structure in Rome.  It is located below the Capitoline Hill, a short distance from the Ancient Roman Forum and the 2,000 year old Flavian Amphitheater (or Colosseum).

The official names of the Victory Monument are Altare della Patria (Alter of the Fatherland) and Monumento Nazionale a Vittorio Emanuele II (National Monument to Victor Emmanuel II) ... shortened to Il Vittoriano (The Victory Monument).  The entire monument is made of white, Brescian marble.  The monument was inaugurated in 1911, though it was not actually completed until 1925.  The interior of the monument was not open to the public, when I was last there in 2004, but it is accessible today.  Since 1921, the monument has also been the site of Italy's Tomb of the Unknown Soldier. 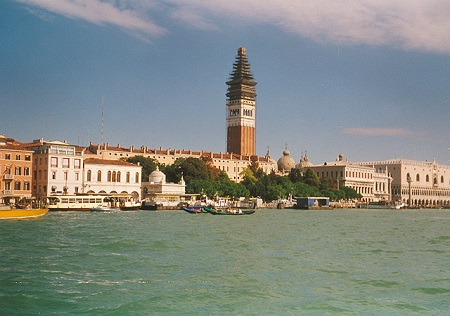 The Campanile in Venice, seen from the Grand Canal
Photographed by the Webmaster in 1996

The Campanile di San Marco is the bell tower of St. Mark's Cathedral in Venice.  Construction began in the 9th Century, but the tower was not completed until the 12th Century.

The three stamps shown above (Sc. #130-32) were issued on June 6, 1921 to celebrate the reunion of the state of Venezia Giulia with Italy.

Venezia Giullia, with its capital city, Trieste, was a major seaport of the Austro-Hungarian Empire.  After the end of World War I, the region was awarded to the Kingdom of Italy by the Treaty of Versailles.

The three stamps depict an Allegory of Dante's Divine Comedy, Italia Holding Laurels for Dante, and a portrait of Dante Alighieri.

Dante Alighieri (1265-1321) was a noteworthy Italian poet of the Middle Ages, but he is World-renowned today for a single work, The Divine Comedy.

The Divine Comedy, written between 1308 and 1321, is a fictional poetic work in three parts.  The book follows Dante on his journey, with the Roman poet Virgil as his tour guide, through Hell, Purgatory, and Paradise (Heaven).  The comedic part is that Dante included historical figures from the past, as well as political figures from his own time (that he disliked) in his Divine Comedy, especially in the section describing Hell.

Here's something special for the philatelically minded collector of the commemorative stamps of Italy ...

Though these are scarce and fairly expensive today, there are ample supplies of them available in the philatelic marketplace. 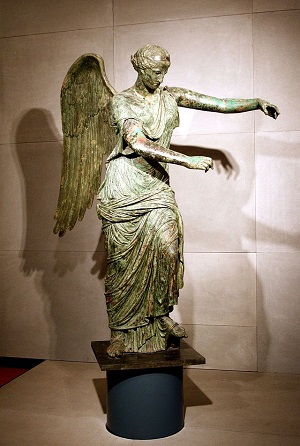 The stamps of Italy shown above (Sc. #136-39) were issued on November 1, 1921 to commemorate the 3rd Anniversary of the Victory on the Piave.

The design of the stamps is based on The Winged Victory of Brescia in the Museum of Santa Giulia.  It is an Ancient Greek bronze sculpture from about 250 B.C.  It was restored by the Romans in about A.D. 69.

Victory on the Piave refers to the Battle of the Piave River, fought during June 1918.  The battle was a major victory for the Italian forces, over the forces of the Austro-Hungarian Empire, near the end of World War I.

Return to Stamps of Italy from
Commemoratives of 1910-1921