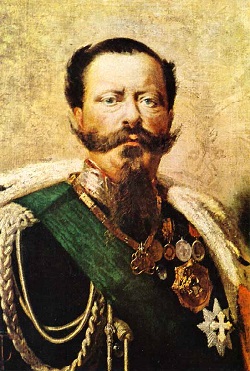 The first stamps of Italy were issued between March and October of 1862.  The new Kingdom of Italy had been proclaimed on March 17, 1861, and Victor Emmanuel II (1820-1878) became the country's first constitutional monarch.

Vittorio Emanuele Maria Alberto Eugenio Ferdinando Tommaso of the House of Savoy had been the King of Sardinia from 1849 until 1861, and he was one of the major protagonists in Italy's Wars of Independence.  He was officially King Victor Emmanuel I of Italy, but he chose to go by his title as King of Sardinia, which was Victor Emmanuel II.  After the unification of Italy, he spent much of the remainder of his reign quietly working on cultural and economic issues.

The Italians voted him the title of "Padre della Patria" or "Father of the Fatherland", and it is this phrase that is inscribed beneath his name on his tomb in the 2,200 year old Pantheon in Rome.

All of the definitive stamps of Italy, from 1862 through 1877, have the following attributes in common:

The first four stamps of Italy, issued during 1862, are shown in the images above.  They are identical to the same denomination 1855-1863 issues of the Kingdom of Sardinia, except that the Sardinian stamps are imperforate and these are perforated.  The images above are of certified mint examples found on the internet.

Beginning in December 1863, a new series of definitive stamps of Italy was issued.  They are all shown above, with the exception of the Scott listed 10 C. denomination in Blue.  This stamp was not part of the original printings, as it was issued in 1877.  It is described with the 1867-1877 issues below.

The images above are of certified mint condition examples of the London Printings that were found on the internet.

The Scott Catalog does not differentiate between the two printings in their listings.  It may be assumed that the stamps described and valued in the Scott Catalog are the less-expensive Torino (Turin) Printings.  For anyone having a specialized interest in these issues, reference to the Sassone specialized catalog is an absolute necessity.

These stamps exist in three types:

In 1877, the urgent need for 2 C. denomination stamps necessitated the surcharging of various denomination official stamps, as shown above.

Used condition examples are known with inverted surcharges.  They are all very scarce and expensive.